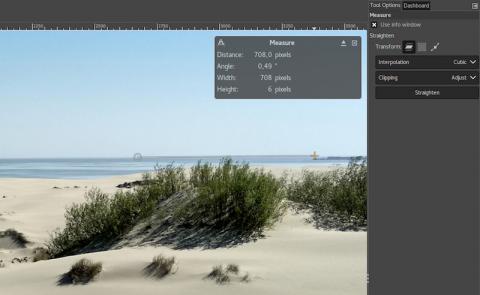 (As a bit of background, I used to be annoyed that Scala didn’t have ++ and -- operators for integers, but after working with other languages, I now understand what Martin Odersky & Co. were trying to avoid.)

With Kotlin you can create lists, maps, and sets with standard functions that are automatically in scope. Here are those functions.

cake.co has a good story about getting Steve Jobs to speak at Unix Expo. 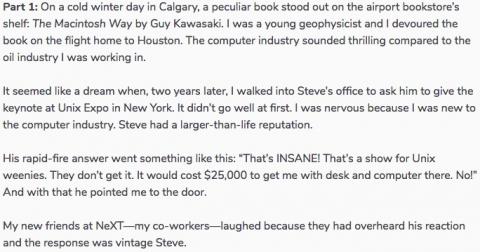 Diagrams that explain HTTP and HTTP2

I can’t do most of these yoga poses right now (because of the whole colectomy surgery thing), but here’s a nice list of 12 yin yoga poses to awaken dormant energy and stuff.

Two women I wanted to have children with

Random thought of the morning: When I was young — maybe an early teenager at the oldest — I was talking to Sister #3 and said I wanted to have a baseball team worth of children. But then a few years later my dad got a woman who was not my mom pregnant, and my parents were divorced. Whatever notions I had about wanting a family and children were wiped out.

Part two of that random thought is that over the years I’ve been fortunate to meet a number of women (over 1,000 if you include school, work, and social events), and out of all those women there are only two who ever made me think, “I can see having children with this woman.”

“There’s only ONE rule, but it’s an important one: all of your values must be functions. Not programming functions, but math functions.”

I think I read that quote in an earlier version of this article. The quote is about functional programming, and it influenced something I wrote in my book, Functional Programming, Simplified: Functional programmers think about themselves as being mathematicians, and think of their code as being a combination of algebraic equations, where each function is a pure function that you can think of in mathematical terms.

From eso.org: “Observations made with ESO’s Very Large Telescope have for the first time revealed the effects predicted by Einstein’s general relativity on the motion of a star passing through the extreme gravitational field near the supermassive black hole in the centre of the Milky Way. This long-sought result represents the climax of a 26-year-long observation campaign using ESO’s telescopes in Chile.”

Joe from Tennessee (a college story)

Straight out of high school in Illinois I made the decision to go to a college in Kentucky. In high school I had never known anyone with a southern accent, so it was really neat to hear everyone talk. (I had also never seen a revival tent, but that’s a story for another time.)

One guy at school — I think his name was Joe — came from Tennessee. He would later become famous for loudly chasing his roommate down our dorm hallway with a baseball bat at 2am because he thought the roommate was too loud when he came back in after a night out.

Joe’s accent was so thick I could barely understand what he was saying, and one day in something of a Seinfeld skit I ended up going to the shopping mall with him just because I would nod my head “yes” and say things like “uh-huh” when I didn’t understand him. Fortunately this was before he attacked his roommate with the bat, and his roommate had a sweet 1950s car that we borrowed, so it was a fun ride, even if I didn’t understand most of it.

Now I think there’s at least a slight chance that Joe might be my new neighbor. He looks like him, and I can’t understand a word he says. But this time I’m being careful not to agree to anything.

If you’re interested in understanding the Cats library, I’m a big fan of the book, Scala with Cats (formerly known as Advanced Scala with Cats). Noel Welsh and Dave Gurnell have a simple writing style, with good examples. Being an older person, I only wish a print version was available. 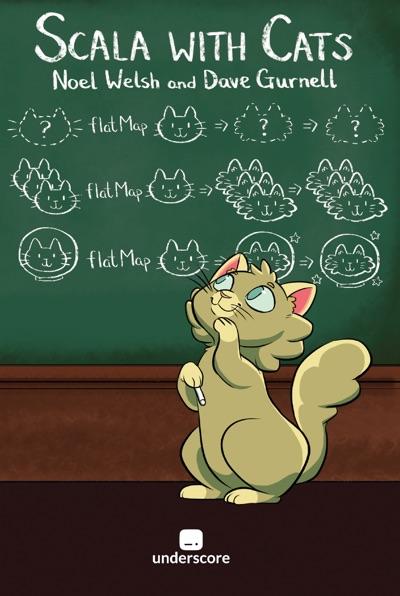 Since nobody uses Facebook on Wednesday, I’ll just slip this one out here while no one is looking ...

Last night I was base-jumping spacetime with some other astral entities, and a being in the group kept not-doing something she was supposed to do. Since we were interdimensionally (similar to “internationally”) working together as a group, this just wouldn’t do.

After the Nth time this happened, I stopped the group mid-flight, and with spacetime flowing around us, I telepathically (and compassionately) asked, “Why aren’t you doing what you’re supposed to do?” Her answer, loosely translated in human terms, came down to, “I’m afraid.”

The moral of this little interdimensional story is that wherever, whenever, and whatever you are, conquer your fears or they’ll conquer you.

If you like computer history, cake.co has an interesting article by Chris MacAskill titled, The secret call to Andy Grove that may have helped Apple buy NeXT.

At the time of this writing there aren’t many examples of the Scala Exception object allCatch method to be found, so I thought I’d share some examples here.

In each example I first show the "success" case, and then show the "failure" case. Other than that, I won’t explain these, but hopefully seeing them in the REPL will be enough to get you pointed in the right direction:

If you’ve never heard of the term DICEE, it was coined by Guy Kawasaki. Mr. Kawasaki was a developer evangelist for the original Macintosh team in the 1980s, and used the term in at least one subsequent book to refer to great products.

“DICEE” is an acronym that stands for Deep, Indulgent, Complete, Elegant, and Emotive:

This slide on “Mast cell-associated disease-specific pain syndromes” comes from doctors Tania Dempsey and Lawrence Afrin. I don’t remember exactly where I saw it, but it was probably on The Mastocytosis Society Facebook page. 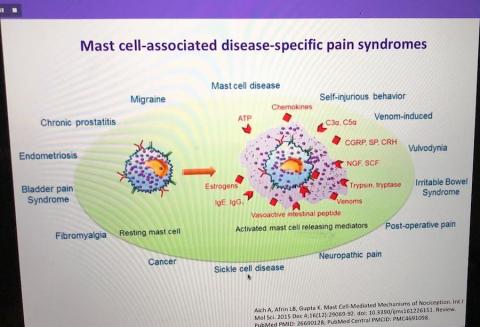 It looks like most of the talks from the recent Scala Days conferences are now online.

Have you ever felt like you were having someone else’s dream? This morning (July 24, 2017) I was having a “back to school (college)” dream, and thought, okay, whatever, I’m bored, I’ll go with it.

The short story is that when I woke up I remembered that one of the teachers was named Don Monk. I figured that was a name made up by my brain, but I googled it just now and found two college professors with that name, one at Rutgers, and the other just down the road at the University of Colorado, Boulder.

Best Buy Should Be Dead, But It’s Thriving in the Age of Amazon

Bloomberg has a nice article about business strategy titled, Best Buy Should Be Dead, But It’s Thriving in the Age of Amazon.