I normally work on a relatively old MacBook Pro (one of the earliest Intel models) that has only 80 GB of disk space, and here lately, as I've gotten more and more into images, audio, and video, that disk space has been disappearing very rapidly. This weekend I nearly ran out of disk space altogether. (And as I think about buying a MacBook Air with small disk capacity, the problem lost disk space on Mac systems looks like it's going to continue to be a problem.)

Both Mac disk utilities were helpful in different ways, but in the end, the OmniDiskSweeper really helped the most, so I'll talk about it first.

The OmniDiskSweeper helped me very quickly find over 3GB of wasted disk space through a simple user interface, which is shown here: 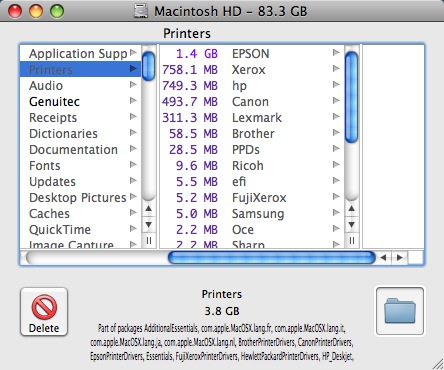 As you can see from that image, printer drivers on my system were taking up several gigabytes of disk space -- for printers I don't even have! I don't have Epson, Xerox, HP, or Lexmark printers, so I deleted all of those drivers, and saved over 3GB right away.

Warning: I don't know if this is always safe to do, but it worked fine on my Mac OS X 10.5 system. I even rebooted the system to make sure it was okay, and everything restarted fine. The one thing I haven't done yet is apply any new Mac OS X updates, but as soon as I do I will try to remember to update this article.

The OmniDiskSweeper also helped me see that most of my other disk space was used by audio files and images, and I went through and cleaned those out manually, and now I'm in much better shape.

I started off my Mac disk-cleaning efforts with another program named DiskInventory X, whose user interface is shown in the next two figures. 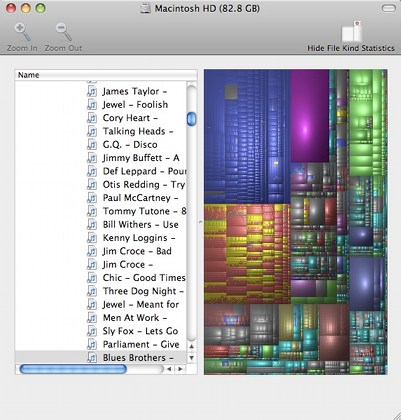 This graph tries to visually show which file types are using the most space on your computer. This graph is interesting, but the same Mac disk usage data is also shown in this tabular view, which is much easier to read, and generally more useful: 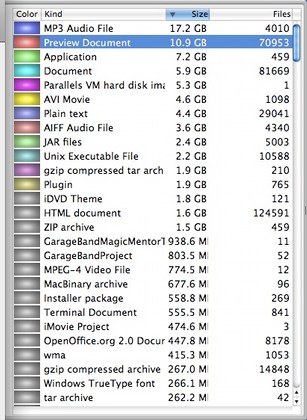 A very nice thing about the table view is that I could quickly see that MP3 files and files associated with Preview (mostly images) were consuming the majority of my disk space.

In the end, DiskInventory X was nice for this summary information, and OmniDiskSweeper was very nice for the detailed information that helped me delete those unused printer drivers.

“There is only Now.”

I hope this tip on Mac disk utilities has been helpful. As mentioned, DiskInventory X is very nice for the summary information it displays, but if I could only choose one application for reclaiming lost disk drive space, I highly recommend the OmniDiskSweeper. It displays your disk usage in a very readable view, sorted by size, and after that it's up to you to decide what you think you can and can't safely delete, and that approach makes a lot of sense to me.