I've been using TextMate (a commercial, plain-text editor) for several years on the Mac platform, and while it's an okay text editor, it has never blown me away, and more often than not, it confounds me. That -- and not handling the new Mac Spaces features very well -- has made me start looking at other Mac OS X text editors over the last several weeks, specifically free Mac text editors.

I didn't know what to expect going into this review project, but I ended up being pleasantly surprised. There are several quality, free text editors for the Mac platform. In fact, they were good enough that I ended up expanding my scope slightly, as I found a few features in these editors I didn't even know I was looking for when I first started.

Given that brief introduction, here is a review of the free text editors I found for the Mac platform, circa July, 2009 (and updated in November, 2009).

Although Komodo Edit isn't strictly just a text editor, it ended up being my favorite editor of the group, in particular because of its support for features I wasn't even looking for when I started my review.

As I dug into this review process, I realized that unless I'm writing a blog entry -- which I do in an editor I wrote for myself -- I'm normally editing HTML, CSS, JavaScript, Java, Ruby, and PHP files. As such, I started to really enjoy the auto-complete features in Komodo, in particular the auto-complete feature for CSS files. I don't work with CSS very much, so I really appreciate an editor that prompts me with the allowed keywords. 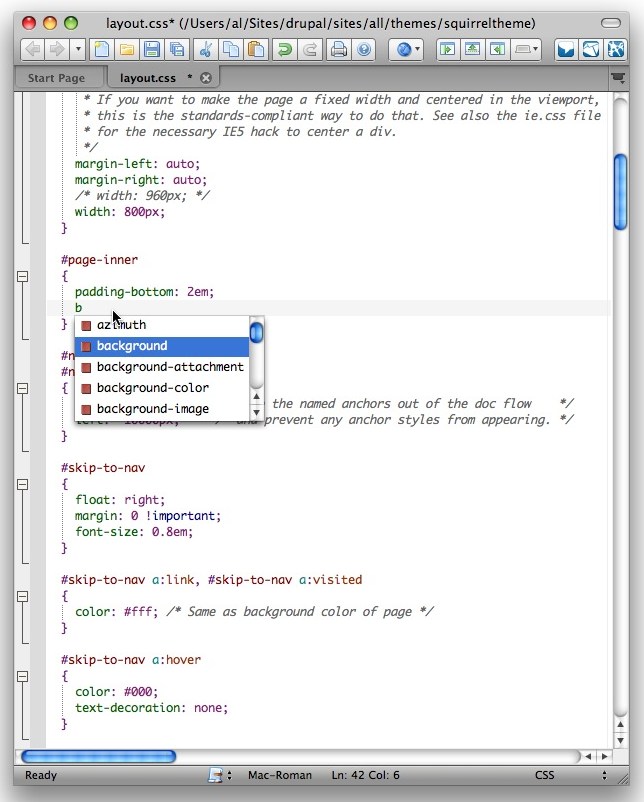 Komodo also provides the auto-complete for other languages, like HTML, Ruby, Perl, etc., and with my lack of memory and use of many different programming languages, this is a very welcome feature.

Frankly, the only drawback I've seen with Komodo is that it starts up slowly. I don't know what language it's written in, but that initial slow startup, and some parts of the look and feel, make me wonder what's going on under the hood. But it doesn't matter too much: Komodo is my new favorite editor, at least for CSS and HTML files.