Drupal form FAQ: Can you share an example of a simple Drupal form? (i.e., a "My first Drupal form" example.)

I've written before about the Drupal learning cliff (learning curve), and as that name implies, getting started with Drupal form development can be a little hard. To that end I'm taking this weekend to write all the form examples I can fit into one weekend.

To get the ball rolling, I've created a first Drupal form example, which will demonstrate one of the most simple forms you can create, with just one form textfield and a submit button.

This simple form example is a combination of several Drupal Form API examples on the Drupal website that start at this page. I originally started with a different approach, but I'm hoping that by following their Form API example syntax that you'll be able to back and forth between this form tutorial and their form examples.

NOTE: This Drupal module/form example was written for Drupal 6. I haven't tested it with Drupal 7 yet, but when I do I'll either update this tutorial or provide a modified version of this tutorial for Drupal 7.

Here then is the step-by-step process to creating your first Drupal form.

For Step 1, create this directory in your Drupal website:

For instance, if your Drupal website is located in a directory named /Users/al/drupal6, the full path to this directory would be:

In that directory create a file named firstmodule.info, and put these contents in that file:

Create a file named firstmodule.module in that same directory, then copy and paste these contents in that file:

Note that it is correct to omit the closing PHP "?>" PHP tag.

Next, go to the admin/build/modules page, and enable your "My first Drupal form" module. It should look like this on your Drupal modules administration page: 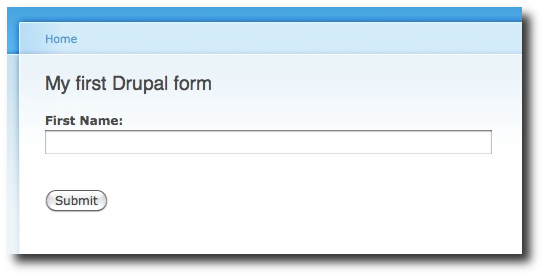 Where did this URL come from? It came from the third line of our function definition above:

That "firstmodule/form" is the URI which people will use to access our first Drupal form.

I've documented the Drupal form code shown above quite a bit, so I won't add too much here at this time. The biggest thing to say is that you need to follow the Drupal Form API and module naming convention in several places. In most places above where you see the string "firstmodule", that string is either used because (a) it is required by the Drupal module and form naming convention, or (b) it is used to make the code more readable and consistent.

I can provide more details here if you're interested, but until any questions start rolling in, I'll just leave it at that.