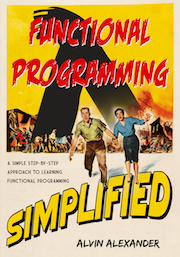 my book on functional programming

A percentage of advertising revenue from
pages under the /java/jwarehouse URI on this website is
paid back to open source projects.