While adding some AJAX autocomplete functionality to a new web application, I created a simple jQuery autocomplete example, using a PHP server-side script, and JSON to communicate the data from the server to the client. After creating that simple example, I thought I'd share all that code in a "jQuery AJAX autocomplete" tutorial here.

Before we get started, I'm going to assume you're familiar with basic HTML, CSS, and JavaScript programming fundamentals. It will also help if you've had a little exposure to jQuery, though that isn't entirely necessary.

I always like to show what something will look like before we get started, and to that end, here's a screen shot of the HTML web page we'll be creating, including the autocomplete drop-down list of selections you'll see when your app is working: 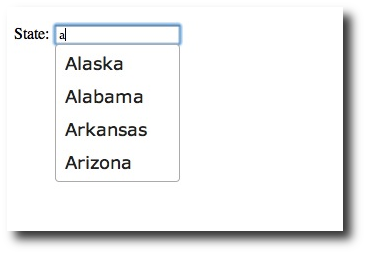 As you can see, this looks like the autocomplete functionality you've seen at Google and many other websites.

Note that in a "real world" example you should also declare an HTML form, but we don't need that for this simple example.

If you want to test this on your own system, just save that code to a file named autocomplete.html. To keep it simple, I recommend creating a directory named autocomplete under a PHP web server (like Apache) that you have access to, then placing this file in that directory. In just a few moments you can put the corresponding PHP script in that same directory.

The PHP server side script

The PHP code is even easier than the HTML code, basically just seven lines of PHP that I could make even smaller, though I'm leaving it as is to make it easy to read.

As you can see from the code, I create a simple PHP array that has three elements in it. After defining the array elements as shown, and then adding those elements to the array named $arr, I echo that data back to the client using the PHP json_encode function.

The only "magic" in this script is described in the comments. Your array elements must contain a key field named either label or value, and in this case I used "label". (You can find more information about this requirement at the jQuery Autocomplete documentation page.)

To test this on your system, save this PHP script to a file named autocomplete.php, in the same directory where you put the autocomplete.html file. If you do this, you won't have to change any code.

If you've saved these files to a directory named autocomplete on a local webserver, you can access the HTML page through a URL like this:

Once you've loaded the HTML page in your browser, you should see that the textfield has input focus by default. Now, if you type the letter 'a', you should see the drop-down list of states appear. If so, congratulations, you've just implemented an AJAX autocomplete example, using jQuery, PHP, and JSON.

(If it didn't work, you're at least ready to debug a jQuery AJAX autocomplete example. Leave a comment here if you're having trouble, and I'll see if I can help.)

As a final note, if you use a function like error_log to log the 'q' queries you receive from jQuery, you'll see that your script will be hit with a new GET query every time the user makes a change in the textfield. Gone are the old days where the user types in a textfield, presses

I hope this jQuery, AJAX, PHP, and JSON autocomplete example has been helpful. As you've seen, once you know the syntax to use on the client and server, getting jQuery AJAX autocomplete code isn't too hard at all. As you can imagine, jQuery is doing a lot of the heavy lifting for you.