Use vimdiff to see the difference between multiple files

To demonstrate how vimdiff works, here's a quick example. Suppose you have one file named getty1 that has these contents:

and then you have another file named getty2 that has these contents:

and you want to visually see the differences between these files. Just issue this vimdiff command:

and then you'll be presented with this view: 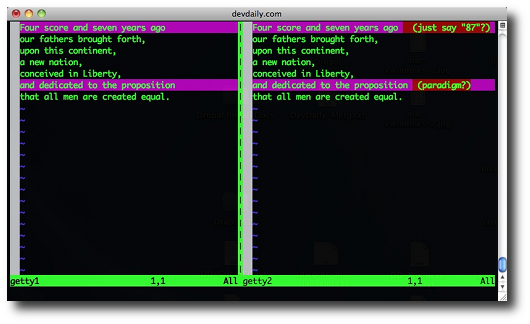 I intentionally kept these files short so they would fit here, but as you can see, vimdiff shows the file differences in the pink and red colors. The pink lines are different between the files, and the red shows the actual differences.

More on vimdiff as a file difference viewer

One cool thing about vimdiff is that when you scroll through much larger files, vimdiff scrolls both files at the same time, just as you'd expect with any file difference viewer.

Another cool thing about vimdiff is that you can edit the files that are being displayed. Not only that, but if you're editing one file to make it look more like the other file, vimdiff dynamically updates its display, so the red and pink highlights change as you type.

A final cool thing about vimdiff is under the covers ... if you use the Linux ls command to look at the vim* files in your /usr/bin directory, you might see something like this:

This shows that vimdiff is really ... drumroll ... an alias for the vim command. That's right, it's the exact same vim command you know and love. It's just smart enough to recognize that when you invoke it using "vimdiff" instead of "vim" that you want to use this file difference viewing capability.

I hope this brief "Using vimdiff to see the difference between two or more files" tip has been helpful. The next time you need a file difference viewer, give vimdiff a try.