Mac CPU and memory usage: Can you recommend any products to easily monitor Mac CPU usage (and Mac memory usage)?

One cool thing about having a good Mac CPU and memory usage monitor is that you can watch it while an application is running. I was just taking a break and watching last night's World Series game on MLB.com, and I happened to look up and see that both of my Mac CPUs were very active. They weren't pegged to the needle like they are when I'm ripping a DVD on my Mac, but they were pretty busy.

Here's an idea of what my Mac CPU usage looked like. I've underlined the CPU usage graphs with a red line at the top of this image: 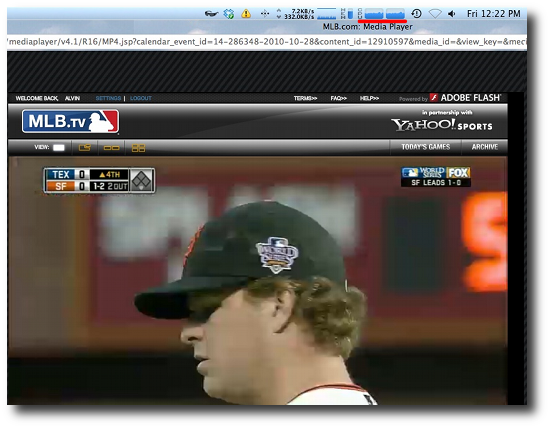 And here's a closer look at just the Mac memory and CPU usage indicators on the Mac menu bar:

As you can see, both Mac CPU processors were very active while watching the baseball, which surprised me a little bit, because Flash is such a maligned technology. It's nice to see the "dual core" CPU approach being used.

While the small graph icons are extremely helpful to see all the time, if you click them you'll see some more detail information. Here's my current Mac memory usage (with the World Series game not running any more): 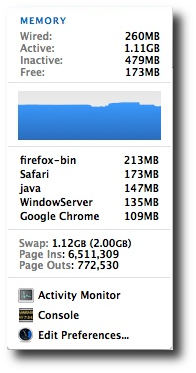 While I rarely recommend commercial products on this website, I have been very happy with the application that I use to see this information: iStat Menus from bjango. Currently priced at $16, it won't break your wallet, and if you want to know what's running on your computer, i.e., "What's eating my CPU?", or "What's eating my memory?", this is one Mac application that makes it very easy to see this information in an unobtrusive way.

Of course there are other ways to see similar information for free. The Mac Activity Monitor is a free, built-in Mac CPU and memory monitor that ships with every Mac. If you're a Unix user, you also know there is a free monitor named "top" that you can access from the Mac Terminal. But as far as a Mac activity monitor that provides good information in an unobtrusive interface, I really like iStat Menus.

(Also see the Comments section below for any additional free Mac CPU monitors and memory usage monitors we find.)