I believe that Ubiquinol helps with my mast cell disease symptoms

Those who know me know that I was born with a rare blood disease, mast cell activation syndrome (MCAS), also known as “Bubble Boy” disease. MCAS is an autoimmune disease, and I’ve written about this in quite a few places over the last five years, including these articles:

Prior to understanding that I have MCAS I went unconscious seven times, but other than that, my symptoms aren’t quite as severe as other people who have MCAS. (That being said, I also have a collection of photos of things that have happened to my body due to MCAS.)

These days — July, 2021 — I feel much better, and as I was thinking about this yesterday, I decided that I should share one supplement that I’m confident is helpful in fighting mast cell disease: ubiquinol. I specifically have been taking this brand:

As they describe on this Mayo Clinic web page, “CoQ10 levels have also been found to be lower in people with certain conditions, such as heart disease, and in those who take cholesterol-lowering drugs called statins.”

While I take quite a few supplements, I’m not prepared to talk about most of those as they relate to mast cell disease just yet. But two that I take every day are ubiquinol and a good multivitamin.

I got started on CoQ10 and then ubiquinol because I had read somewhere that CoQ10 was being used for cancer patients and other people with autoimmune diseases. Because mast cell disease is an autoimmune disease, I decided to give it a try. Thanks to the anaphylaxis, I had already been unconscious seven times by that time, so I figured I had nothing else to lose.

One other important point: Many people, doctors, and researchers say that ubiquinol is better than taking plain CoQ10, because the ubiquinol is more easily absorbed in your body. As an example, this is discussed in this National Library of Medicine research article.

Putting my money where my mouth is

Finally, as proof that I entirely believe in what I’m writing, here’s a list of my recent orders on Amazon: 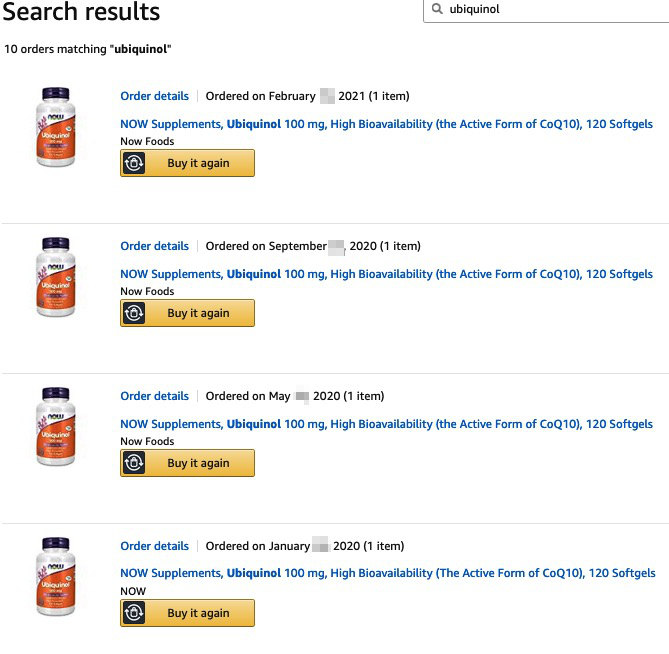 As shown in the search results, I’ve purchased ubiquinol from Amazon ten times.

Summary (and of course, check with your doctor)

In summary, if you are interested in trying a CoQ10 or ubiquinol product, I strongly believe that this NOW Supplements Ubiquinol product has helped reduce my MCAS symptoms:

And as the usual disclaimer goes, check with your doctor before taking any supplement. If they’re any good, they will perform blood and 24-hour urine tests on you. Speaking of which, doctors originally proved that I had a problem through 24-hour urine tests. They couldn’t see any problems in the bloodwork, but once they started doing the 24-hour urine tests they immediately started testing me for mastocytosis, pheochromatosis, and a few other things I can’t remember at this time.

Wishing you all the best in your health,
Alvin Alexander
Manager, Valley Programming (the owner of this website)

P.S. — As I saw somebody else write on their website, and as I note on the Terms and Conditions page of this site, the links I use to Amazon on this page are known as “affiliate links.” This means that if you click an Amazon link and buy the ubiquinol, Valley Programming gets a small commission. That being said, this website contains over 10,000 posts, and less than fifty of those are about my health, and like this one, there are just a few where I write about a very specific product that I strongly believe in. Put another way: I don’t write articles like these to make money, but, because I pretty much had to put my life on the line to learn about ubiquinol and mast cell disease, I don’t have a problem recommending this product and making a small commission on the sales of it.