“You have cancer” (a Thanksgiving-ish story)

A few people I’ve talked to recently who have (or had) cancer told me they can clearly remember the moment when their doctor told them that they had cancer.

In my case I also remember the conversation with the doctor, but that was more of a formality. When I picked up the phone to talk to her, I already had a pad of paper and a pencil in hand, and I was ready to write down the details she was going to tell me. Because in my case I was pretty certain that I had cancer when I saw the ultrasound results a few days earlier.

Going back in time ... ER doctors first saw some nodules in my neck when they did a CT scan for something else, and told me I should get those nodes checked out. They didn’t stress the point like “You need to get these checked out ASAP,” they just said, “Oh by the way, you have these other nodules you should get checked out.”

That CT scan was done at an ER in Illinois, after having chest pain on Thanksgiving of 2013. This was long before I knew anything about mast cell disease, allergic angina, or that the stress of being between two bickering sisters could trigger mast cell symptoms (bickering > stress > mast cells release chemicals > allergic angina).

As I note in Mast Cell Disease vs Histamine Intolerance, the “chemicals” released by mast cells include histamine, serotonin, superoxide, heparin, tryptase, thromboxane, PGD2, and PAF.

So I was traveling at the time — 1,000 miles from my Colorado home — and by the time I got home and the holidays were over and things settled down a little bit, I stumbled on that paperwork and thought, “Oh, yeah, I need to get those nodules checked out.” This was in mid-January of 2014. So I went to my doctor, showed her the paperwork, and she sent me in for an ultrasound, which didn’t happen until early February.

At first the ultrasound tech hovered over a couple of nodes, and while I could see the nodes on the screen, they didn’t look too different than the surrounding tissue. But then when she went to another area it was very clear that those nodes looked nothing like the surrounding tissue. It was like you were looking at some sort of consistent gray-black material in the background, but in the foreground there were these circular/oval things that almost looked striped, like they were moving backwards or sideways in a world where everything else was going in a different direction.

This image isn’t mine, but it gives you an idea of the contrast I saw, though the nodes I saw stood out even more strongly than this; the material in the nodes I saw almost looked striped and somehow they looked “backwards”:

I guess the tech wasn’t allowed to say anything specific to me about those results, but she asked me to stay in the room and went outside to talk to some other people. Then she came back in she asked if I had enough time to have a biopsy performed on those nodes right now.

I asked her some questions, but I guess she wasn’t allowed to specifically say “It looks like cancer,” when speaking to me, and I clearly remember everyone walking on eggshells around me. I kept pressing them on it and they said it could be cancer, but that I shouldn’t get too worked up about it, it might not be cancer. So we did the biopsy immediately, and then I waited a few days to get confirmation of the results from my doctor.

But as I mentioned, the actual phone call from the doctor wasn’t traumatic. It was more matter of fact, like, “Okay, what kind of thyroid cancer is it? Is it treatable? What do I need to do?”, and so on. This photo shows the notes I wrote down during that conversation: 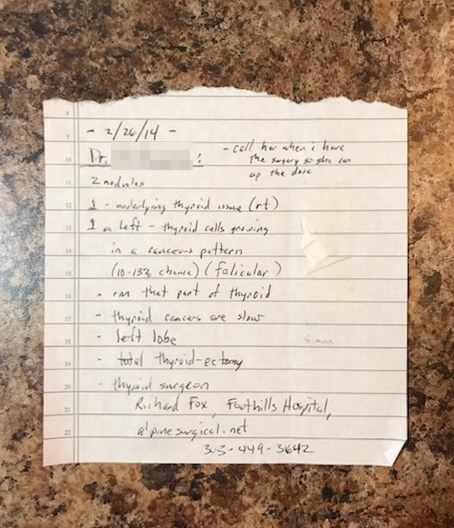 Maybe it would have been more traumatic if it was a more severe form of cancer, but in my case, the ultrasound was the “you have cancer” moment that really stood out for me.