With their current market cap, my math shows there should be 891M shares currently outstanding, and that is confirmed on this page. This compares to 940.09M shares that were available in March, 2013. (Note that the chart shows a different number of currently outstanding shares, but it doesn’t show any values for this year, including the recent $14B buyback.)

The net effect of Apple buying their stock and retiring it from the market is that the remaining shares are more valuable. During the time they’ve bought back ~5% of the outstanding shares, AAPL stock has risen ~12%. You might expect the second number to be even higher, but I’ve been reading about “institutional investors” dropping the stock because Apple hasn’t released substantial new products. (Institutional investors can affect the stock price dramatically because they can also buy or sell millions of shares at a time.) This 12% increase does not include changes in the stock price since the buyback announcement last night; shares are currently up 1.8% today.

More info at the Washington Post, and Cult of Mac. The chart comes from ycharts.com. 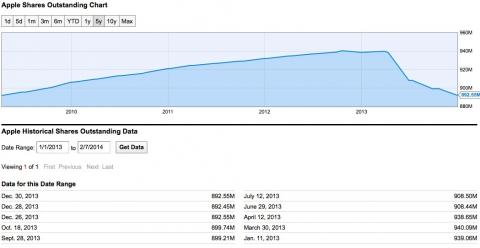 Tags
aapl
apple
stock
< back to my photo gallery