This is a quote about “competition” from a new player drafted by the Denver Broncos.

I like this because way back when I tried out for the baseball team at Texas A&M, I was on the field with somewhere around 50-100 other guys who were trying to “walk on” to the team. On the field, standing next to all of these other guys, there was nothing special about me for the coaches to notice. But once I stepped on the pitching mound to throw batting practice, none of them could hit me. I just kept throwing fastballs for strikes against batter after batter, and nobody hit anything against me except maybe an occasional weak grounder. The pitching mound was where I competed, and I felt like I had to get these guys out to take the next step. (I also had to only throw fastballs because it was supposed to be batting practice.)

I try to transfer the same attitude to work, but I will admit, it’s different. But when a client asks me to do something, I still think of it as competition. I want to do the best work I can because (a) they pay me a lot of money, and (b) I am competing hard so they will hire me for the next gig. 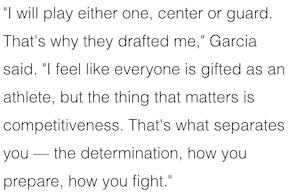