This fangraphs article also mentions the pitching concept of “tunneling.” I’m sure it’s as old as baseball itself, but it’s a good name for the concept. When Fernando Valenzuela first came up he was brilliant at this. He would throw his fastball and screwball to the low, outside corner of the plate, and presumably the spin on the ball looked the same, so right-handed batters could only guess which pitch was coming (which made him incredibly successful).

In high school I did the same thing the best I could: I threw fastballs high, and then a curveball off of that, with the curve starting on the same trajectory, or with this terminology, “in the same tunnel.” 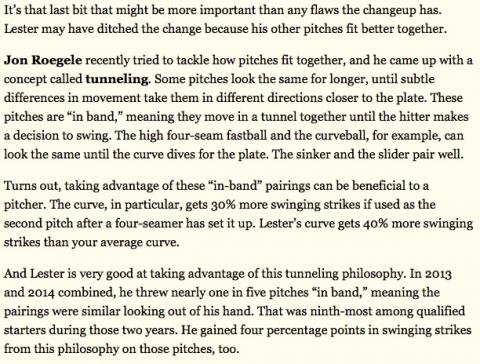