Starting to write an immutable singly-linked list in Scala

For some examples in my new book on functional programming in Scala I needed to create a collection class of some sort. Conceptually an immutable, singly-linked list is relatively easy to grok, so I decided to create my own Scala list from scratch. This tutorial shows how I did that.

Background: What is a Cons cell?

The first time I learned about linked lists was in a language named Lisp. In Lisp, a linked list is created as a series of “Cons” cells. A cons cell is simple, it contains only two things:

The last cons cell in a chain of cons cells links to a Nil value.

In this image I show a * character where the link would be. Here’s a short chain of cons cells, which helps to show the complete concept: 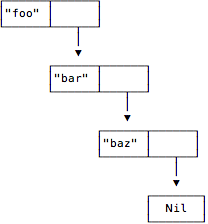 Using only this concept, you can create a series of linked cons cells like this:

If a Scala Cons class existed right now, that code would be an accurate implementation of what I showed in the last image.

While that’s cool, the Lisp creator(s) also defined a :: function, and with it you can create a series of cons cells like this:

Not only is that code cleaner, it’s also legal Scala code, because the Scala List class is implemented in a way similar to what I have described. (Try it in the Scala REPL!)

While that’s all cool to know, for my purposes — writing my new book — I wanted to write my own singly-linked list class from scratch, so I pressed on and started writing my own Scala code ...

Starting to create my own Cons class

Because a cons cell consists of these two things:

I initially started to create a Cons class like this:

However, because I also need to create my own “nil” value to use as a way to identify the end of the list of cells, that code isn’t quite what I need. By this I mean that I need to write something like this for my custom “nil” value:

but that doesn’t work because the Cons constructor takes two parameters. So I had to do something else.

Because the second cell in a cons cell is essentially a pointer to the next cons cell, it occurred to me that Cons and NilCons should share some base interface. This interface should define some common behavior, but it shouldn’t require any constructor parameters.

This led me to write this interface:

I use a generic type A here because a cons cell should be able to hold anything: an Int, a String, a Whatever. I further use the +A type parameter because the value in the cell can’t be changed. As I describe in the Scala Cookbook, this makes my collection more flexible than if I had used only A alone.

This interface is a Scala implementation of what I said earlier about a cons cell, i.e, it consists of:

The next thing I want to do is to make sure my custom nil value works as desired. I don’t want to confuse my nil with the Nil from Scala’s List class, so I call it NilCons. As I wrote earlier, it needs to extend the interface, so a quick sketch of it looks like this:

There should only be one NilCons value in the world, so I define it as a singleton by declaring it as an object.

As for its methods, for NilCons the implementation of value and next aren’t important because they should never be called. NilCons is just used to mark the end of a series of Cons links, and the rest of my code will understand that.

That being said, I’ll show a better way to implement these methods later.

Now that it looks like I have my NilCons problem solved, let’s see if I can implement my Cons class.

I know a few things about Cons. First, I want to be able to create a series of Cons cells as shown before:

This code tells me a couple of things:

These thoughts lead me to this type signature:

Unless I have any more requirements, the Cons class doesn’t even need a body. With this current code:

While that code is okay, I want to do two things:

Because value and next in NilCons are never intended to be called, you can leave them defined as ???, which will lead to them exploding if they ever are called. But a better approach is to make your intent clear. I rarely throw exceptions in code, but that’s a valid thing to do here. In fact, it turns out that this is how the Nil object in Scala is defined. Copying and pasting Scala’s Nil code gives me this:

Because NilCons has no value, it throws a NoSuchElementException, and because it doesn’t make sense to call next on a NilCons it throws an UnsupportedOperationException. Those exception names line up very nicely with what should happen if these methods are ever called on NilCons.

Adding a toString method to Cons

Next, because I want to be able to prove to myself that my code is working as desired, I’ll add a toString method to Cons. I’ll start with this code and see if it gives me what I want:

The complete code at this point

When I combine these changes with a little test App, I get this code:

When I run that code I get this output:

Technically this is a good start, but from an API standpoint I’d really like to have a :: method so I can write code like this:

I hope that was interesting

Well, I hope that was interesting. I initially planned to turned this into a series of tutorials, but I got involved in writing my book about Scala and functional programming, so I haven’t had time to get back to this.

If you’re interested in learning more about Lisp, these are the best books I know:

Outside of writing Gimp plugins (which are written in a variant of Lisp called Scheme) I don’t use Lisp, but it’s an interesting language to learn about.