With reports that Apple is considering using ARM chips in their Mac lineup -- and with me using a Raspberry Pi for the last ten days -- I was curious about the performance of ARM chips vs Intel CPUs. I just ran across a story that showed this image, and several similar comparisons. The story states that the processor used in their test Surface Pro 3 is the Intel Haswell Core i5, so an i7 will be even faster. As a result, I don’t think Apple will be switching their laptops from Intel to ARM processors any time soon. (Unless of course you get at least 8-10 ARM processors in each system; even then, each processor will be significantly slower, and they would have to rely on apps being written to take advantage of many more cores). The original story is here on Ars Technica. 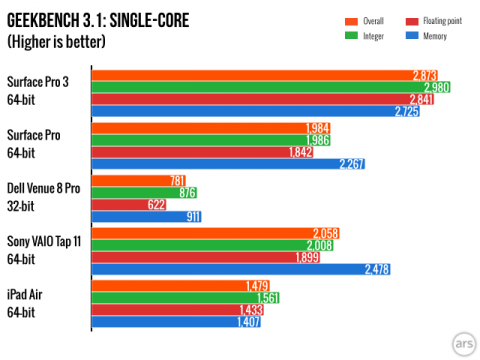 Tags
performance
arm
intel
< back to my photo gallery