Git: How to compare two different versions of a file

Git FAQ: How do I compare two different versions of a file with git?

This solution depends on what exactly you need to do.

Have not run `git add`

If you just modified a file but haven’t run git add on it yet, use this:

To see changes to a file you have run git add on, but have not committed, use this:

In my case, I updated this introduction.md file, and then added it with git add, so I used that second command:

The + changes in the last three lines showed the changes I made, so this gave me confirmation that I did what I wanted.

If you’re using Git and need to compare two recent versions of the same file, I can confirm that this git diff command works:

Per the excellent book Pro Git, “HEAD^” means, “The parent of HEAD.”

As shown on this SO page, there are other ways to issue this Git command, and similar commands.

I did the same thing again today, but with some different Git commands. First, I created a short/concise list of all changes to a file using this git log command:

Once I saw the commit (f73f744) that I wanted to compare the current version of the file (HEAD) to, I ran this command:

That showed all of the differences between the two versions of the file, with this difference being the important change I was looking for:

So again, if you need to see how to compare two versions of a file with Git, I hope these examples are helpful. 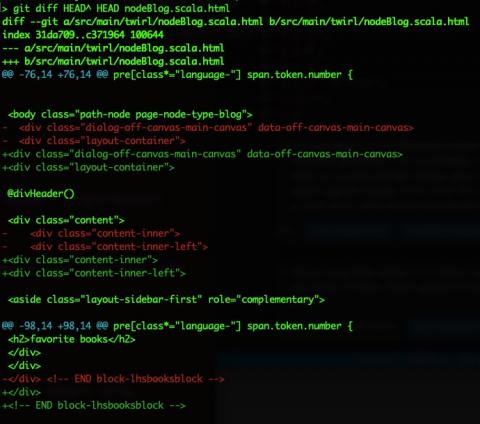