I’ve been looking into Twitter’s stock lately to see if it seems like more of a Buy or Sell opportunity. The financials are so limited that I can’t make an educated decision that way. For instance, there is no “P/E” because there is no “E.” So I consider it more of a gamble than an investment.

One way to try to look into Twitter is through rumors, and I’ve found that a good resource for this is Glassdoor.com. This image is how Glassdoor shows their ratings and trends for Twitter. I added a few red arrows to highlight the things that jumped out at me. As a point of comparison, Glassdoor shows that Apple has “81% recommend to a friend” and a “72% positive business outlook.” The most recent reviews of Twitter are mixed, and the people who write bad reviews blame Twitter’s mid-level management as being too bloated, and senior management for not providing leadership and constantly changing directions.

Finviz shows that Insider Transactions are -16.24%, not a good sign.

Quarterly revenue growth is actually very good since December, 2013. The sticking point is that Twitter can’t seem to grow their user base, MAUs, or “monthly active users.” They’re basically finding ways to make more money off of the same number of users. 79% of their users are outside of the U.S., and what I just read is that part of their plan is to grow in India and other countries.

Personally I think their UI sucks. They seem to be afraid to make changes to it, and that’s exactly what it needs, changes.

This Capital Cube article states that Twitter will have a hard time raising additional debt, if need be. 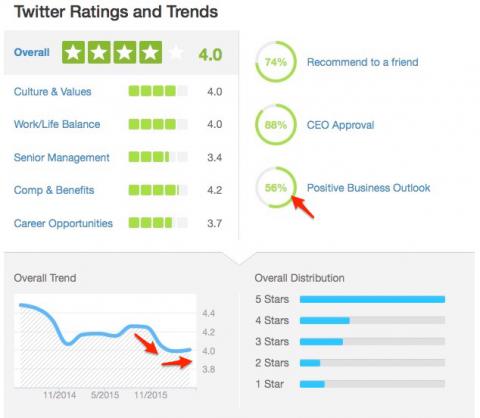