Not one of my better times. On the drive from the Lower 48 back to Alaska, I got stranded in Canada. The reports said the roads were clear, so I was hoping to make it through with my old tires, but “clear” has a different meaning in the winter in Canada than it has in the Lower 48. “Snow-packed with occasional ice” was a more apt description. My tires weren’t up to the task, and not wanting to die, I was forced to stop in Dease Lake, British Columbia, population 303, one motel, one gas station, one mechanic.

The owner of the building shown in the photo, a man who was being treated for lung cancer and would soon die, ordered new tires for me. They arrived five days later. On the day the tires arrived I walked down to watch him install them, and see if I could help. I found that he had an assistant who only had one arm, but could do some amazing things with just that arm.

They put the tires on the car but had no way to balance them, so they told me to drive slow until I got to Whitehorse in the Yukon Territory, about 650 km north.

All of the people in the town were nice, but I ate food out of the local gas station for six days, the tires cost $1,200, and the motel bill was another $600. 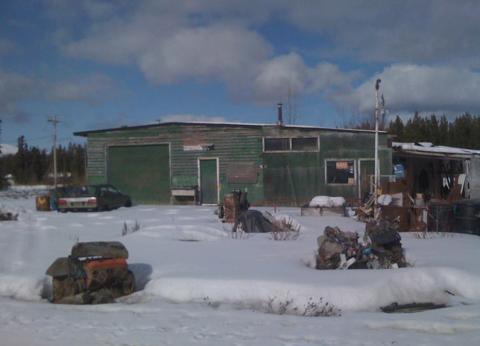