Typesafe - What is in a name?

(The image shows some comments from the Typesafe page that I linked to in the next paragraph.)

When I first heard that some people at Typesafe wanted to rename their company, I thought, “That’s interesting, but I wonder why?” As I thought about it I came up with names like Concurrence and Datastream.

But then the more I thought about it, I thought, “This is a really bad idea.” A lot of people who know and love Scala and Akka and the Play Framework know the company as Typesafe. The company name takes nothing away from that.

I think everyone’s biggest fear is that they’ll name the company as something related to “reactive,” which is just a marketing buzzword that sounds dumb to a lot of people today and will sound even worse next year. My personal second fear is shown in the comments in the image, that they’ll go from a name like Borland to Inprise, which was a horrible decision (and the company disappeared shortly thereafter).

Think about this for a moment: Apple is the biggest company in the world, and what does the name “Apple” have to do with any product they make? 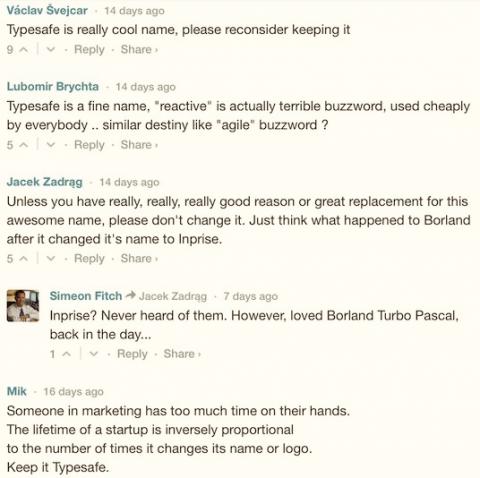