When I put Linux Mint on a few of my computers recently I quickly encountered the words “suspend” and “hibernate” when attempting to put a laptop to sleep:

“What the heck is the difference between Suspend and Hibernate,” I wondered. “I’m used to just having a ‘Sleep’ option on my MacBook Pro.”

HP offers 157 “business” laptops. (I have no idea how many “personal” laptops they offer, I didn’t look.)

When I searched Dell for 15” laptops, their search results showed 167 models.

Apple has one. Maybe as many as four, depending on how you count.

I wouldn’t want to use a 9” tablet as a laptop all the time, but sometimes at night I use my Nexus 9 with a Bluetooth keyboard to type some notes or start writing some code I plan to work on the next day. I don’t use many apps, just a decent Android text editor I found.

Pros: Using the touchscreen to scroll and place the cursor. Copy and paste isn’t too bad.

Cons: The small display and keyboard.

(In the image, the word “catain” was supposed to be “captain.”)

Here’s a little more discussion from this Twitter thread about why developers don’t like Apple’s latest laptop design.

Quiver is a “programmer’s notebook.” Personally I keep all of my notes out here so I can search them easily, but I can see where this app would be good.

Scala Notebook is a project on Github that lets you run the Scala REPL in a browser.

A Chrome OS notebook test? - As a friend wrote to me the other day, "Want to try a Google Chrome OS notebook? Take you current notebook/laptop/netbook, fire up the Chrome browser, put it into full screen mode, and see how long you can work that way."

Apple's recent announcement that Mac Java support is deprecated inspired me to look at the so-called "Apple Tax" -- the premium price tag you're going to pay when buying an Apple computer, whether that be a MacBook, MacBook Pro, iMac, or Mac Pro instead of a Windows PC.

I just ran a comparison of a base model Apple MacBook versus two different Dell Windows notebook PCs, and the numbers are pretty scary:

The Apple Tax on a base MacBook is a whopping $219 to $299
more than faster, better-equipped Dell notebook models.

I don't write about products or services too often, but I really like the idea of the Logitech Speaker Lapdesk N700, pictured here: 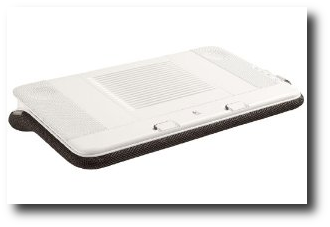 I don't own a tv any more, but from time to time I'll watch some videos before going to bed (either shows on Hulu, or something from my DVD collection), and this "Speaker Lapdesk" looks perfect for that occasion.

I haven't been in the market for a new laptop until recently, and I have to say, wow, I didn't know how much the prices had fallen in the PC laptop market. The entry-level PC models make the MacBook prices seem pretty outrageous.