vim editor: How do I enable and disable vim syntax highlighting?

vim syntax faq: How do I turn on (enable) or turn off (disable) vim syntax highlighting?

Turning on syntax highlighting in your vim editor is usually pretty simple; you just need to issue a syntax on command, either in your current editor session, or in your vimrc configuration file. Here are a couple of quick examples. 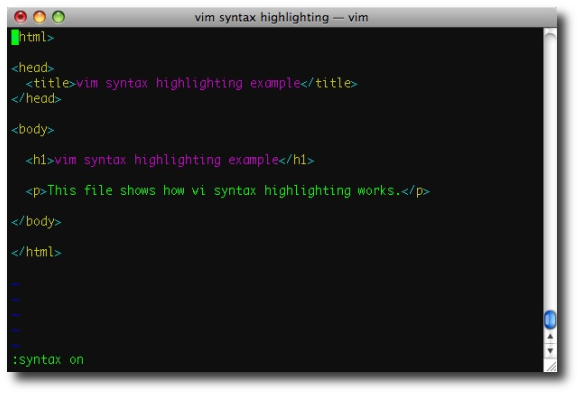 Conversely, if you want to turn syntax highlighting off in your current vim editor session, just issue this command:

When you turn vim syntax highlighting off, the same file in your vim editor will now look like this: 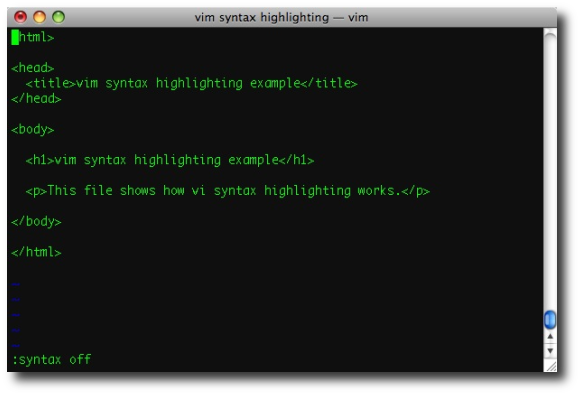 If you want syntax highlighting enabled by default when you open your vim editor, just add this command to your vimrc configuration file:

If you’re not familiar with the vim “vimrc” file, it is the vim configuration file, and it can be found in your home directory on a Unix or Linux system. The filename actually begins with a decimal (it's a “hidden” file), and editing it is as simple as issuing this command:

Just open the file as shown, then add the syntax on statement somewhere in the file.

I’ve seen vim syntax highlighting not working for several reasons. In one case, vi and vim were actually not the same binary, and the user was trying to use vi (which was older) instead of vim. Once he started using vim everything worked fine.

In another instance a user had an unusual version of vim installed; it was called something like “tiny vim”, or “vim tiny”. Once we installed the “normal” vim version, everything worked fine.

If you’ve never used vi help before, and you need to get out of that screen, just type a normal vi quit command, like this:

That will take you out of the vim help screen, and put you back in the file you were editing.

Mentioning this is like opening Pandora's box, but ... if you really want to dig into the vim syntax highlighting topic, it may help to know that there are vim syntax files included with your Unix or Linux vim distribution. These files will have names like this:

If you have the Unix locate command installed they are easy to find, like this:

I just looked on my current macOS system, and found that the vim syntax files are all under this directory: