In general, I believe in a Warren Buffett style of investing where you:

The theory is that from time to time, a stock will fall out of favor with the stock market, and when its price gets to a certain low point, it becomes a “value” to buy. You can think of this strategy as being like buying a new car. If you buy a new car when it’s first introduced, and the model is very popular, the dealer is going to want a lot of money for it. Conversely, if you wait and buy that model 11 months later — when the next “new” model is about to come out — you’ll be able to buy the same car for a much lower price.

I mention this because I’m about to write about moving averages, and moving averages have nothing to do with a Warren Buffett style of investing. Moving averages can be good for people who make a lot of trades, and they can also be used to identify “ceiling” and “floor” prices of stocks. An important idea there is that the “floor price” of a stock using a moving average can be used to set a “stop loss” on a stock.

Because I generally follow the Buffett style of investing I don’t use moving averages as a main tool, but I like to know how they work, and I use them as a way of supporting my other research. Recently I have found that they are nice because I can look at a bunch of output from Finviz or other sites, and see that the “20 Day SMA” for a stock is +2.8%. That tells me at a glance that the stock price is trending up.

Because I don’t use moving averages a lot, this page isn’t completely thorough. Please see the Investopedia pages I link to for much more information. This is just a “reminder” page for me.

Given that background, here’s what I know about moving averages.

Definition: What is a Simple Moving Average (SMA)?

With a few edits by me, Investopedia defines SMA like this: “A simple moving average (SMA) is an arithmetic average that is calculated by adding the closing price of the security for a number of time periods and then dividing this total by the number of time periods. Short-term averages respond quickly to changes in the price of the underlying, while long-term averages are slow to react.”

Later they continue: “In other words, this is the average stock price over a certain period of time. Note that equal weighting is given to each daily price.”

A disadvantage of an SMA is that it gives equal weight to all of the prices used to calculate its value. So in a 20-day SMA, the stock price from 20 days ago has the same weight as the price yesterday. For some purposes it is more useful if the most recent price has a higher weight (more value), and as a result people invented EMAs.

Definition: What is a Exponential Moving Average (EMA)?

This Investopedia page describes EMA like this: “An exponential moving average (EMA) is a type of moving average that is similar to a simple moving average, except that more weight is given to the latest data.”

They later add: “This type of moving average reacts faster to recent price changes than an SMA. The 12- and 26-day EMAs are the most popular short-term averages, and they are used to create indicators like the moving average convergence divergence (MACD) and the percentage price oscillator (PPO).”

The general advantages of MA values — the reasons they exist — are:

Before getting into how to use moving averages to buy and sell stocks, it’s important to know that they have some disadvantages:

These statements will make more sense as I explain how traders use moving averages.

Moving averages can be used to show trends. Their value in this regard is that they smooth out the “noise” when a stock is a little volatile.

Use: Buying and selling signals (crossovers and trends)

Some investors use moving averages to look for buying and selling signals. In the simplest form, when a daily stock price moves above or below a moving average, this is called a “price crossover,” and it can indicate a buy/sell signal:

When multiple moving averages cross over

This example from Yahoo Finance for Volkswagen shows three SMA signals, and how their crossovers might be used to buy and sell VLKAY. Note that I usually use a red color to show the shortest time frame (it’s “hot”), a yellow color for the medium-term time frame, and a blue color for the longest time period (it’s “cool”): 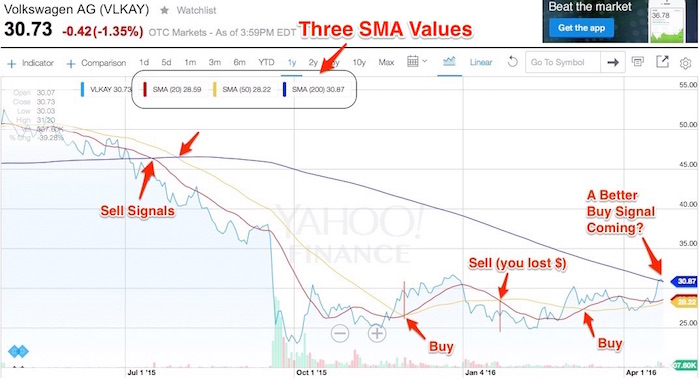 This second example shows what an SMA-20 looks like compared to an EMA-20 for VLKAY: 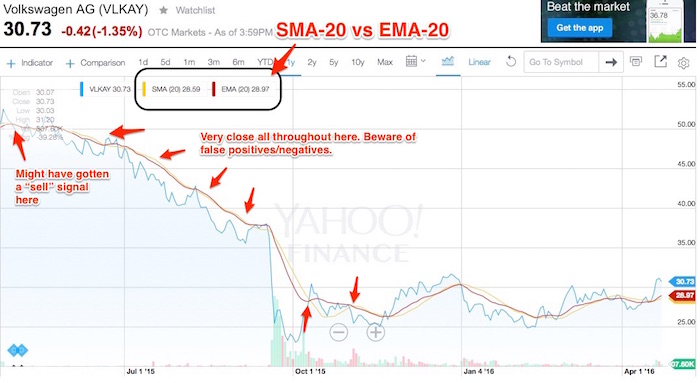 As I mentioned, I don’t really buy stocks this way, so I’m not an expert on what time period is “best.” For example, it may be better to use a short EMA (20 days) against a longer SMA (50 days).

Use: Support and resistance (ceilings and floors)

This Investopedia page provides these definitions of support and resistance in regards to moving averages:

The theory is that stocks will usually “bounce” off of the floor or ceiling, but it’s important to know that this isn’t always the case. The 200-day SMA seems to be used commonly as a ceiling and floor.

Over the last few months I have used moving averages as a “stock” with the Barchart.com website. This image shows how Barchart shows VLKAY right now (April 24, 2016): 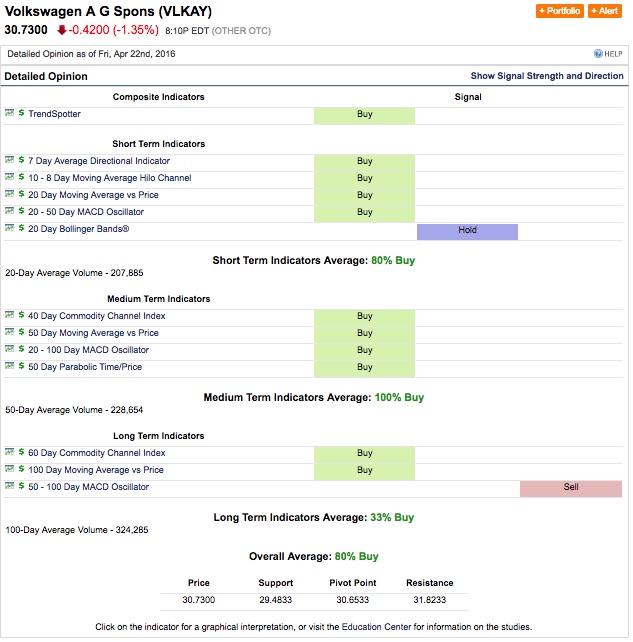 As you can see, Barchart shows a variety of stock signals on one page.

Personally, I don’t buy or sell anything by looking at this one page, but I do use it as a signal, or a screener. Volkswagen is on my radar because they were found to be cheaters on their emissions tests last summer/fall, which tanked their stock. So my current interests are:

These signals give me a hint in regards to that second question.

I don’t use MACD very often, and I’m not an expert on using it, but here are some quick notes:

MACD can also be used with a signal line, but I have not used that yet.

MACD is more complicated than using simple moving averages, but once you understand it, it helps to show trends better/faster than moving averages alone. (I am not a MACD expert yet, as I generally do not make trades based on these theories; I just use them to support my other research.)

This Investopedia page defines MACD like this: “MACD is a trend-following momentum indicator that shows the relationship between two moving averages of prices. The MACD is (usually) calculated by subtracting the 26-day exponential moving average (EMA) from the 12-day EMA.”

This Investopedia page describes it a little better: “The concept behind the MACD is fairly straightforward. Essentially, it calculates the difference between an instrument's 26-day and 12-day exponential moving averages (EMA). Of the two moving averages that make up the MACD, the 12-day EMA is obviously the faster one, while the 26-day is slower.”

They continue on that page: “On the MACD chart, a nine-day EMA of the MACD itself is plotted as well, and it acts as a trigger for buy and sell decisions. The MACD generates a bullish signal when it moves above its own nine-day EMA, and it sends a sell sign when it moves below its nine-day EMA.”

You really need to look at charts to understand MACD, so I suggest looking at those two links.

More notes from the first link:

From this excellent Investopedia page: