I just started doing some research on the stock of Exxon Mobile (XOM), and these are my notes on their stock. After some introductory notes, all of my other notes are in reverse-chronological order.

Those definitions come from this article on Phillips 66.

A few notes on why I’m looking at Exxon: 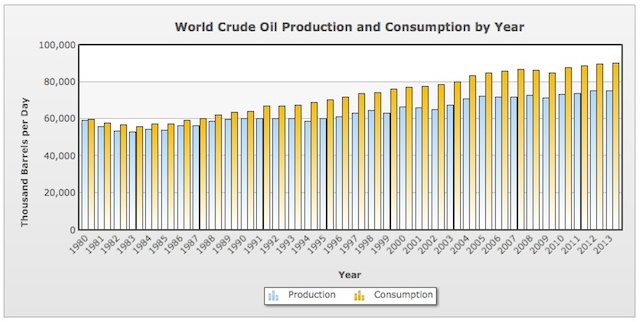 I don’t understand why Chevron is doing this, but these two articles state that Chevron is going to keep producing more oil:

Aha, it looks like their “upstream earnings” were still $1.56B -- not a shabby number. At first I thought they were losing money in this segment, so I didn’t know why they’d pump more oil, but that’s not the case.

The first article also states that unliked XOM and CVX, ConocoPhillips (COP) has separated their upstream and downstream business. At the moment the vertically-integrated model of XOM and CVX is helping their businesses.

This is a good article on MLPs (Master Limited Partnerships ), including these nuggets:

Oil prices have crashed significantly since I first wrote this article. This image (from here) shows oil prices over the last five years:

The following stocks are somewhat related to Exxon (XOM) and energy:

Articles related to XOM (and energy)

The following articles are related to XOM, energy, and also dividend-paying stocks: