Note: I write all of the following as a fan of the Denver Broncos and C.J. Anderson.

Don’t believe what you read from the Denver Broncos front office today (3/15/16). They made another mistake this offseason — a very expensive mistake this time — by not making C.J. Anderson a mid-tier free agent at $2.356M. That offer was only $800K more than the first-tier offer they made, and because other teams would have had to compensate Denver if they signed Anderson, it’s unlikely anyone would have offered him a contract. Because of this mistake, Denver will have to pay Anderson almost $6M this year, and another $4-5M next year, with something like $1.7M of that guaranteed. (I don’t remember the exact number.)

I have no earthly idea why the Denver management team did this. So far in this offseason they really seem to be off in trying to judge “market value.” I don’t care that they lost Osweiler, but with this move they’ve cost themselves a lot of salary cap money, which would be really nice to have because they need to sign a new starting QB.

As Mark Schlereth just said on the radio, the move was “reactionary” and a “panic move.” His radio partner said that Anderson is now the fourth-highest paid RB in the NFL.

(Image from this espn.com page.) 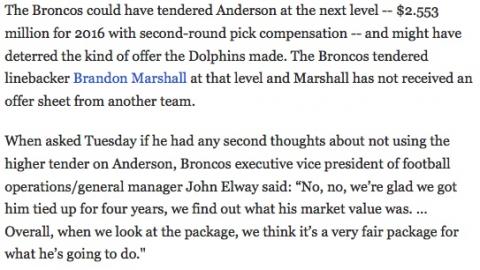