Disinformation, and the people who believe it

A friend of a friend posted this false image on her Facebook page, and several people responded with profane comments about AOC. Finally someone else who actually put some thought into it posted this Snopes page showing that AOC never said anything like this. The fact is, the entire commentary was fabricated. Per Snopes:

“The source of the fabricated article, Taters Gonna Tate, is part of a network of sites and social media accounts operated by Christopher Blair, who produces a high volume of junk news and misinformation, much of it inflammatory, which he presents as ‘satire.’”

The sad thing is that some people don’t think, and they seem to want to believe propaganda like this. Two things are going through my mind after seeing this racism and hatred. First, we really need to focus on the state of education in the United States, both IQ and EQ. Second, I think a lot of people have pent-up anger because no matter how hard they work, they don’t have much money, because in America the rich are getting richer and the poor are getting poorer, and the middle class is disappearing. 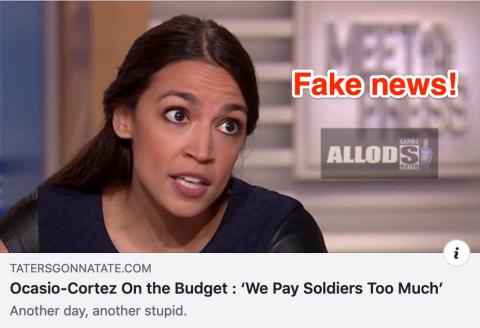