Making the switch, from iPhone to Android

The comical part of my recent surgery was that my iPhone 5S kept dying, both before and after the surgery. Something is going on where the iPhone completely loses reception, and the only way to fix it — the only hope of fixing it — is to completely restore the phone using a secret handshake technique they taught me at the local Apple Store. (They also told me this technique only works about 10% of the time, and kindly suggested I buy a new iPhone because the 5S is almost four years old.)

Before the surgery the phone was completely dead for 2+ days, so I was driving around like Jim Rockford, borrowing other people’s phones and getting in touch with people in person. I had to talk to my surgeon, two groups at the hospital, a caregiver service, etc.

Skipping past that ... I decided to give an Android phone a chance, so I bought a relatively cheap Moto E phone, pictured here next to the dying iPhone 5S. I’ll get the Moto activated tomorrow, and I hope to give it at least a month. I’ve used Android tablets for years, but this is my first Android phone. 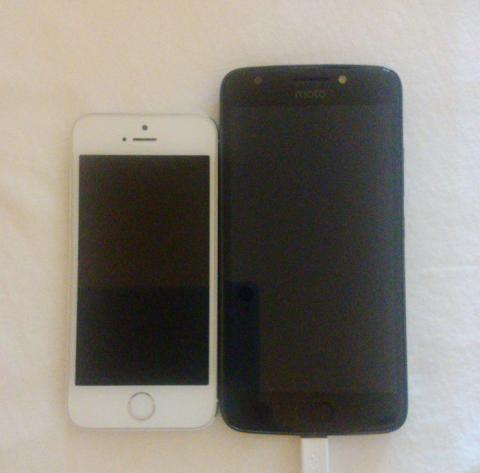