Some time in the last week or two Google announced a $99 sale on their first generation Moto 360 watches. I purchased one, and it came in the mail this morning. My main purpose for buying one is to see how my “Just Be” mindfulness reminders app (for Android) works with Android Wear smartwatches. This image shows what the notifications currently look like.

I like the way it works off the shelf, but I kinda want to get rid of the “Just Be” name on the notification. The watch shows the app icon, and that’s good enough for me. I know it probably should be there for “branding” purposes, but I’d rather just see the mindfulness reminder message. At least the app name is in a much lighter font color, that’s good.

FWIW, I don’t have an Android phone, but I do have a Google/Android Nexus 9 tablet, and everything between the tablet and watch seems to be working fine so far.

(The Moto 360 watches were available at this link on the Google Play store, but the last time I checked they were out of stock.) 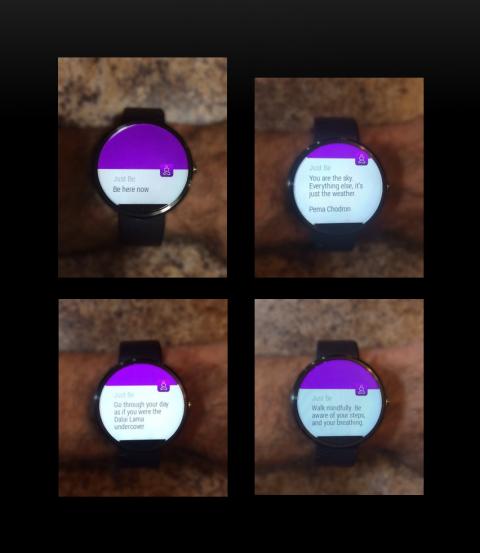