Tim Cook’s Apple: Driven only by the bottom line?

Under Tim Cook, Apple seems much more driven by the bottom line than under Steve Jobs. As this loopinsight.com article points out, “The (MacPro) models on sale today (late 2016) have the exact same specs as the very first ones that rolled off the Texas assembly line back in December 2013.”

I don’t think anyone is craving new body styles for MacBook Pro’s or MacPro’s, but modern, up to date processors and displays would be nice. And by not having those things, it makes a person think, “Hmm, I wonder what Windows’ systems look like these days ...”

As I recall, being driven by the bottom line is what got Apple in trouble under John Sculley and Gil Amelio. 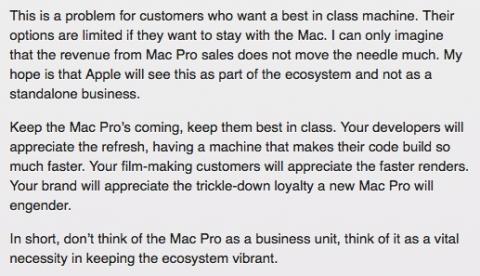