Please note that this example is almost 100% the same as the Laminar “Hello, world” example, except that I add a few minor things to it.

Just like my first tutorial, I also provide an sbt project for this tutorial to help you get up and running asap:

Clone that project if you want to follow along with the text below.

Given that introduction, this is what this example looks like in a browser:

Here’s the source code that makes this example work:

As you can see, the code consists of several div elements, with different content in each element. Hopefully the HTML-ish elements make sense, so I won’t describe them. But here are a few notes about the unfamiliar parts:

But what this code does is that whenever a user types something into the input field, an onInput event is triggered, and that causes the map method to be run. Inside map the value we get from onInput is ignored with the _ character, and we just yield thisNode.ref.value, which is the value in the input field. That value is then sent “to” the nameVar reactive variable.

Because nameVar is an observable variable and it’s observed by these two lines of code:

those two lines are immediately updated.

That’s the way observables and observers work,
and Laminar is 100% based on this principle and
style of coding.

Here’s another way of looking at how that code works: 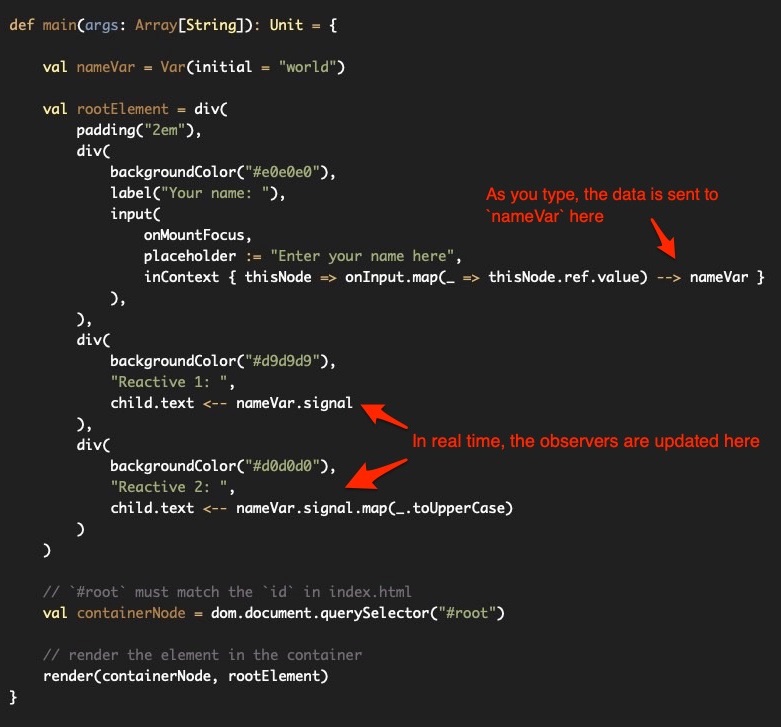 An awesome thing about Laminar is that you can write Scala code that’s compiled to JavaScript (using Scala.js and sbt), letting you write single-page applications using Scala!

As you’ll see in the Github project:

All of that is explained in my first tutorial.

One thing that isn’t mentioned in that tutorial is that whenever you update your Scala code and it’s recompiled into JavaScript, you need to refresh your browser so it picks up the newly-generated JavaScript file.

Experiment with the examples

Now that you’ve seen this example and have access to my Github project, you can also copy and paste the other Laminar examples into this project to experiment with them.

When you’re ready for the next step, I just added my third Laminar tutorial, A small Laminar reactive routing example.

If you go forward in working with Laminar, here are some helpful resources:

Laminar depends on the following three projects, and if you go forward, their docs will also be helpful: