Posts in the “science” category

When we look up at night and view the stars ...

“When we look up at night and view the stars, everything we see is shining because of distant nuclear fusion.”

Why was it so hard to take a picture of a black hole?

AskAMathematician.com has a good answer to, Why was it so hard to take a picture of a black hole?

How and why Japan exploded a small bomb on an asteroid

bbc.com has an interesting story about how and why Japan exploded a small bomb on an asteroid.

How ‘magic angle’ graphene is stirring up physics

Nature.com has a great article, How ‘magic angle’ graphene is stirring up physics (Misaligned stacks of the wonder material exhibit superconductivity and other curious properties).

From their website: “The 2018 Engineering Gift Guide from Purdue University is filled with fun toys, games, books, and applications to engage girls and boys ages 3-18 in engineering thinking and design. Researchers looked for toys that would promote engineering practices ranging from coding and spatial reasoning to problem solving and critical thinking.”

Looking at what makes a baseball move

Back in my day, aerospace engineering undergrad students had very little time to work in the wind tunnels at Texas A&M, but in the limited time I had I tried to look at what makes a knuckleball move erratically. Barton Smith at Utah State University did the same thing (presumably with much more wind tunnel time) looking at a baseball’s spin rate, spin axis, and orientation of the ball.

The most interesting story for me yesterday was that a mile-wide meteor hit Greenland, possibly as recent as 12,000 years ago, and created an impact crater 19.3 miles wide. The impact would have released 47,000 times the amount of energy that was released by the Little Boy nuclear bomb that was dropped on Hiroshima in 1945. The impact crater was hidden by a half-mile thick sheet of ice until recently. (The image shown comes from the article I linked to.)

The migrations of the first Americans

I enjoyed this National Geographic article about the migrations of the first Americans.

Why you can smell rain

Tim Logan of Texas A&M University has a nice little article on Why you can smell rain.

From eso.org: “Observations made with ESO’s Very Large Telescope have for the first time revealed the effects predicted by Einstein’s general relativity on the motion of a star passing through the extreme gravitational field near the supermassive black hole in the centre of the Milky Way. This long-sought result represents the climax of a 26-year-long observation campaign using ESO’s telescopes in Chile.”

After watching the movie Powder and hearing an electrical arc device referred to as Jacob’s Ladder, I looked into it and found this Jacob’s Ladder page on the Popular Science website (where this image comes from). I was familiar with the term in a religious context, but I didn’t know that’s what the name for this device is.

This was a good read: Birds can see Earth’s magnetic field, and we finally know how that’s possible.

The oceans’ circulation hasn’t been this sluggish in 1,000 years

From the Washington Post, The oceans’ circulation hasn’t been this sluggish in 1,000 years, and that’s bad news.

Niels Bohr: Everything we call real ...

The image shows a couple of good quotes from Niels Bohr about quantum mechanics. I like this one as well:

An expert is a person who has made all the mistakes that can be made in a very narrow field.

The center of the Milky Way has thousands of black holes

“The supermassive black hole lurking at the center of our galaxy appears to have a lot of company, according to a new study that suggests the monster is surrounded by about 10,000 other black holes.” From this story at NPR.

I saw this quote by Gus Speth on Facebook and Twitter, and wanted to share it here. As Mr. Speth says, the top environmental problems aren’t biodiversity loss, ecosystem collapse, and climate change, they’re selfishness, greed, and apathy (mostly the first two, in my opinion).

Teaching the mathematics of infinity (and childrens’ brains)

Here’s an article with two interesting exercises near the end of it: How thinking about infinity changes kids’ brains on math. When you’re ready to go deeper, that article links to a NY Times article, Teaching the mathematics of infinity. And then that article links to another titled, The life of Pi and other infinities.

(When I was a young lad, I’d often lay in bed at night and wonder, “Okay, so I go to the edge of the universe ... what’s after that? There’s gotta be something after that, right?”)

@WorldAndScience has this great video of weight distribution dynamics that people with trailers might want to watch. 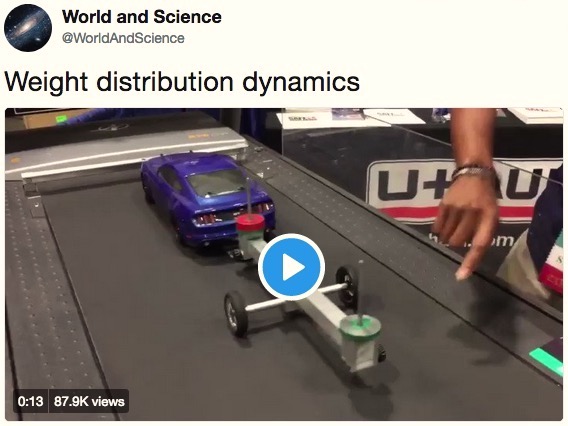 From a fastcodesign.com article: “Researchers at the Lawrence Berkeley National Laboratory are developing smart photovoltaic windows that can shade you and generate electricity at the same time ... This coated glass is about 82% transparent when it’s at room temperature ... At 7% efficiency, they’re still under the minimum of 10% that the team led by Professor Peidong Yang believes would be adequate for commercial purposes. Dou told me that they hope to reach that mark in the next three to five years ... They also face a manufacturing roadblock: the color. Right now, Yang’s team can get the glass to turn orange, red, and brown ... But the main problem, right now, is the glass’s temperature threshold, which they’re working to reduce to 122 degrees Fahrenheit, the typical temperature of glass exposed to a typical sunny midday.”

Mashable asked astronauts if they think aliens exist. Here’s part of the article I found interesting:

“The math isn’t easy. How many stars are in the universe? Well, that depends on the size of the universe. We’re able to observe the cosmic microwave background (CMB), radiation formed around 400,000 years after the Big Bang. It tells us the observable universe goes back around 14 billion years. But there could be something beyond the CMB, or even other universes contained in a massive ‘multiverse.’”