Baseball - How to throw a changeup

There are two regrets I have about being a baseball pitcher in high school. First, I didn't take care of my body or eat well, so in my senior year I suffered a bad arm injury. Second, I didn't learn to throw a great changeup.

For all four years of high school I was our team's opening day pitcher, and in my junior year I was the co-MVP of the team, had a 1.00 ERA, and struck out 1.25 batters per inning (while walking one batter every 10 innings). I have no doubt that I would have struck out many more hitters — probably more than two per inning — and had an even lower ERA if I could have thrown a great changeup.

What makes the changeup a great pitch

The great thing about the changeup is that you can throw it through the strike zone for a strike. It's not like a curve, slider, sinker, or splitter where you're often trying to get the batter to chase a pitch out of the strike zone.

With the changeup you can still throw the pitch for a strike, as a friend of mine used to do. He didn't throw very hard, but he had two pitches, a fastball and a changeup, and generally both pitches were thrown on the outside corner, at the knees. Both pitches were strikes, but if the batter guessed wrong, he was either too early or too late. Although he couldn't throw very hard, my friend was a great pitcher.

Having a pitch like this that you could throw for strikes back then was very important, but today — with umpires having smaller and smaller strike zones, and today's batters taking more pitches than ever before — the changeup is even more vital. You'll see this with the best batters in the major leagues these days. They're patient enough not to swing at pitches outside the strike zone, but they will swing — and miss — at a changeup thrown in the strike zone.

Major league pitchers demonstrate how to throw a changeup

Okay, enough of all that, let's take a look at some changeup grips from some of the best baseball pitchers in the game today. Here are some of the photos I've been able to find of major league pitchers demonstrating how to throw a changeup.

We'll start with the man who just threw a perfect game, here's Dallas Braden on how to throw a changeup: 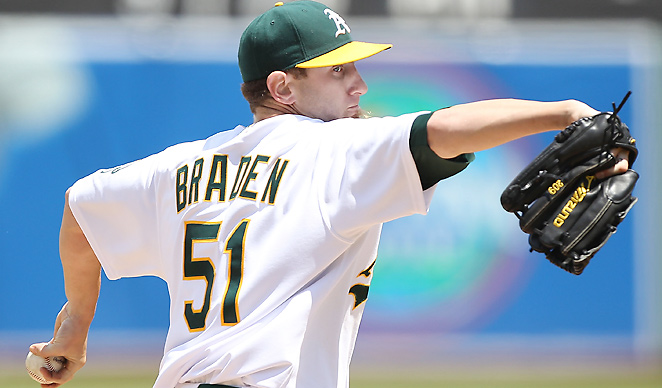 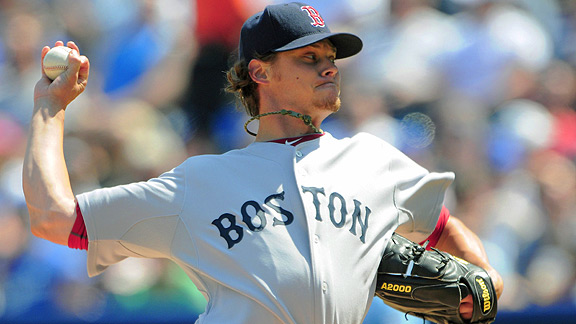 Greg Maddux on how to throw a changeup: 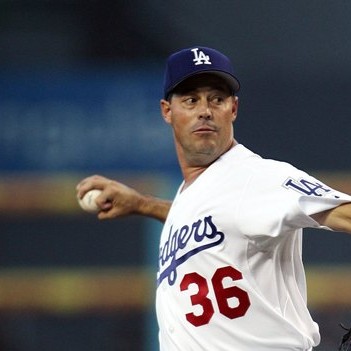 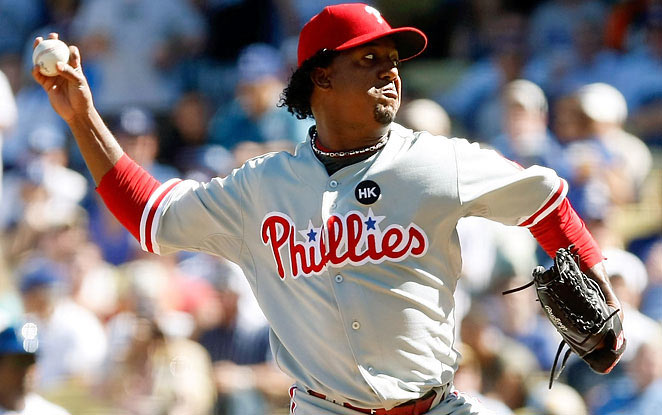 This is Carlos Silva of the Cubs, throwing what I assume to be a changeup: 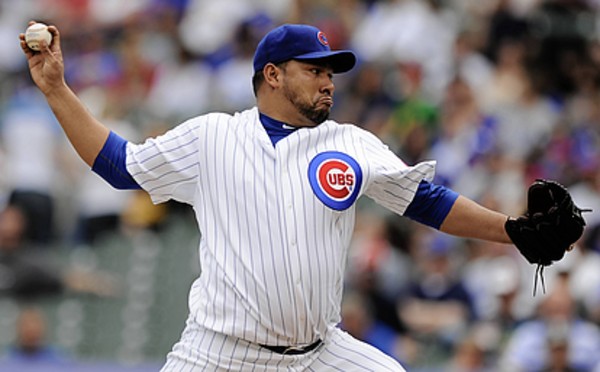 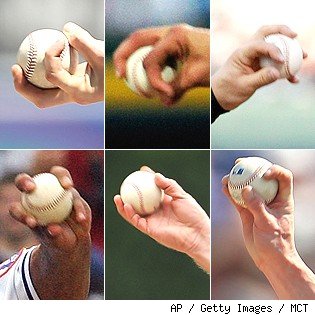 (I just found that last image on this website. They also have a nice article about the changeup, and changeup grips.)

As you can see, there are several different ways to grip a changeup, and you just have to find one that feels comfortable, and works best for you.

How to throw a changeup: the Jamie Moyer changeup grip

Of course if you know about the changeup pitch, you know that Jamie Moyer, currently 47 years old, is the master of baseball's changeup. Here is a sequence of pictures that demonstrate the Jamie Moyer on how to throw a changeup: 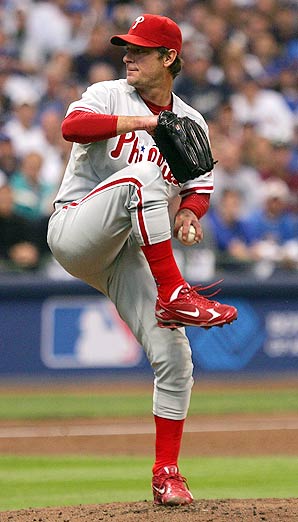 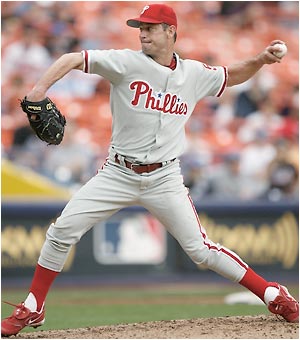 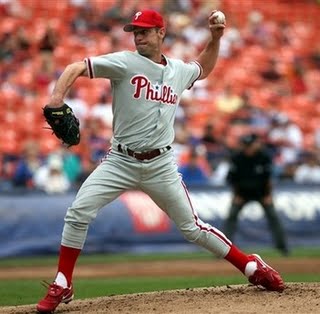 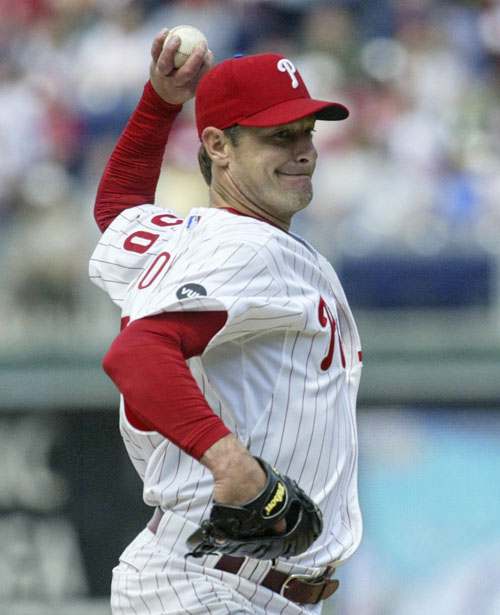 And here's a rare picture, Jamie Moyer throwing a changeup at the actual release point — wow, what a great pic! 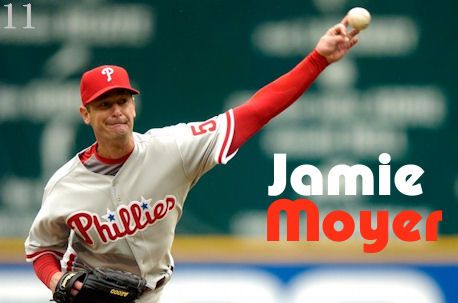 I wish I had this collection of pitchers throwing changeups when I was growing up, and I hope they can help you.

(Note: I need to credit the photographers who took all these wonderful photos of pitchers throwing a changeup, and will do so shortly.)

How to throw a changeup

There are several keys to throwing a great changup. First, your arm motion must be identical to your fastball arm motion. If you put yourself in the mind of the batter, he must be absolutely sold that you are throwing him a fastball.

If you have access to a radar gun, it seems like a great changeup is typically 7-9 miles per hour slower than the same pitchers fastball. Some pitchers have even more of a speed difference between their fastball and changeup, but this is typical.

Also, some pitchers throw their changeups at more than one speed. If you're seriously interested in learning how to throw a great changeup, I strongly recommend watching any baseball game that Jamie Moyer pitches. Seriously, the guy is older than I am, and he's still in the major leagues. That alone should show you the power of a great changeup.

Before leaving, here's a short list of baseball pitchers today with the best changeup in the game:

I hope this article on the baseball changeup pitch has been helpful. As I mentioned early on, the changeup is an incredibly important pitch, and I know it would made a world of difference in my pitching career.