I’m pretty new to learning that I probably have Mast Cell Activation Disease (MCAD) — also known as Mast Cell Activation Syndrome (MCAS) — and as I’m learning more about it, I’ve been wondering, “What is the difference between MCAS/MCAD and histamine intolerance?” In this article I’ll share what I’ve learned so far.

(Note: I take a little time to explain mast cell activation disease in this article. If you just want a quick overview, see the Summary section below.)

MCAS/MCAD symptoms are caused by mast cells in your body degranulating. Degranulation is a process where (a) mast cells receive a message that tells them to go into action and then (b) they release a variety of chemicals into your body as a response to this message. The message is called a trigger (more technically, an “inflammatory mediator”), and when the mast cells release their chemicals that process is called degranulation. (Here’s an excellent research photo of a mast cell degranulating.)

You can think of mast cells as being like little balloons in your body, and these little balloons contain a bunch of chemicals like histamine, serotonin, superoxide, heparin, tryptase, PDG2, and PAF. When a mast is triggered it releases those chemicals, and that process is called degranulation because those things inside the balloon are like little granules.

Here’s a sketch of what a mast cell looks like: 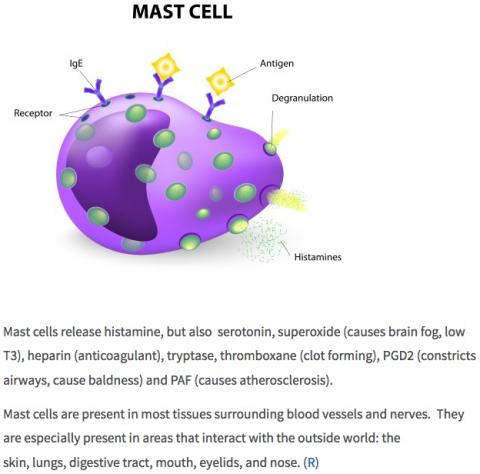 (For information on where that image comes from, see this page on my website.)

While that description applies to chemical triggers inside the body, people with MCAS/MCAD think more about triggers in our environment. There are many (many!) environmental triggers, with probably 25-50 common ones, and maybe 100 or more beyond those. I may list them all at some point, but they include stress, heat, strenuous exercise, candles, perfumes, and many types of foods, including foods that contain high amounts of histamine.

Update: This next image comes from a paper by one doctor at Harvard and a second doctor at the University of São Paulo in Brazil:

Their paper is on MCAS and how it may be the root cause of other illnesses, and as you can see, the different mast cell “mediators” can cause many different symptoms other than itching, rashes, and hives.

This leads me to histamine intolerance, which is also referred to as HIT. From what I have read, HIT is not even currently recognized as a medical condition in the slow-moving U.S., but it is recognized in European countries. Everything I’ve read is that if you go to your primary care physician, allergist, hematologist, or other doctor in the U.S. and tell them you think you might have HIT, they will probably laugh you out of their office.

Skipping past that ... the theory behind HIT is that a healthy body can easily handle most histamines that are thrown at it, but in people that have HIT, for some reason their body can’t process histamine out of their body fast enough.

An analogy is to think of having HIT as being like having a clogged drain, such as in a kitchen sink. When the drain isn’t clogged, the water goes out as fast as it can, but when the drain is clogged, the water either can’t get out, or perhaps it gets out, but much more slowly. In either case, if water is going into the sink faster than it’s draining out, the sink will overflow with water.

A person who has HIT has this same problem: histamines are coming into the body faster than they are going out, so their body has more histamine than it can handle, resulting in a wide variety of allergic reactions. Because mast cells release histamine, they are involved in this process.

Given that background, a good question is, “What is the difference between mast cell activation disease and histamine intolerance?”

My best guess at this moment is that there is probably a close relation between these two issues that isn’t well understood at the moment. One important thing I can add to that guess is that I know that there are over 200 possible triggers that can be sent to mast cells, and not all of these triggers are related to histamine coming into the body. Therefore you can say that MCAD/MCAS has many triggers beyond just histamine exposure.

For instance, I mentioned earlier that heat and exercise are MCAS triggers. In these triggers your body isn’t being exposed to new histamine from an external source, such as drinking wine that has a lot of histamine in it. But for some reason in people that have MCAS, triggers like these cause your mast cells to degranulate, and when they do that they eject the histamine they contain, but — and this is an important but — they also spew out many other chemicals (serotonin, superoxide, heparin, tryptase, PDG2, PAF). That’s a really important point: when mast cells are triggered for people who have MCAS, they eject many different chemicals, not just histamine.

When I was very sick, I used to tell doctors that I felt like I had been drugged. For me, the feeling was very similar to how you feel immediately after a surgery. At first you think you feel okay, but then when you try to move it’s like, “Whoa, I better just lay down for a while.”

So, the differences between MCAS and histamine intolerance can be thought of like this:

Note 1: People with MCAS/MCAD generally follow a low-histamine diet. Because we already have enough problems with mast cells releasing histamine, you don’t want any more of it around you than is necessary.

Note 2: People with MCAS/MCAD take several different medications to treat their disease. Some of these are typical allergy medicines like Allegra, Zyrtec, and Benadryl, but they also take other medications known as “mast cell stabilizers.” I don’t know if people with HIT take this second class of medications, but they make a huge difference for me.

These are a few more notes I need to research and add to this article:

As I noted above, the differences I know between MCAS/MCAD and histamine intolerance are:

Another way to sum this up is to say that as an MCAS/MCAD person, even though I keep my histamine input very low, I still struggle with many MCAS symptoms, such as either passing out or nearly passing out when my symptoms are at their worst. This is in the total absence of itching, rashes, or hives.

I’ll continue to update this article as I learn more. As I mentioned, I only learned in the last month or so that I may (probably) have MCAS/MCAD, so I’m still learning about it.