From Urban Dictionary: The theory that computer programmers obtain quasi-magical, superhuman coding ability when they have a blood alcohol concentration percentage between 0.129% and 0.138%. The discovery of this effect is attributed to Steve Ballmer, CEO of Microsoft - who probably “discovered” it by simply monitoring his own perpetually inebriated nervous system, and deducing that programming ability “peaks” after a few drinks and then dips dramatically after full-blown drunkenness ensues.

Photo is part of a full cartoon at http://xkcd.com/323 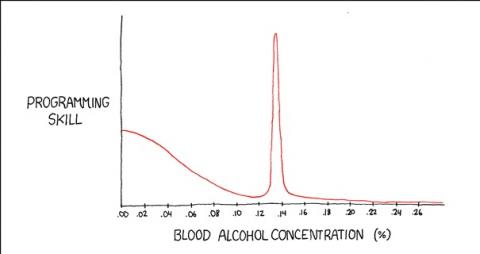