As I was writing the Scala Cookbook, 2nd Edition — and debating writing a book about Scala.js — I had to start thinking about how to implement Scala.js applications in the real world. When I did that, I began to look at these Scala.js libraries:

As I tried to work with those libraries, I coudn’t find any simple “Hello, world” examples for any of them, so as a result I’ve started to create those myself. In this article I share a Slinky “Hello, world” tutorial, using sbt as the build tool. If you’re comfortable with Scala 2, sbt, HTML, JavaScript, and Facebook’s React library, you should be able to understand this tutorial.

In regards to the first steps of this tutorial, if you’re already comfortable with Scala, sbt, and Scala.js, and just want to learn how to use Slinky, skip the next section and go on to the “Getting started” section.

As a brief bit of background:

you can compile that class to a JavaScript file with a sbt/Scala.js command, and then include that file in an HTML document. When you do so, the resulting JavaScript code prints “Hello, world” to your browser console.

Getting started with Slinky

In this short tutorial I’ll demonstrate how to create a Slinky “Hello, world” example. When you’re finished, you should see a result like the following in your browser: 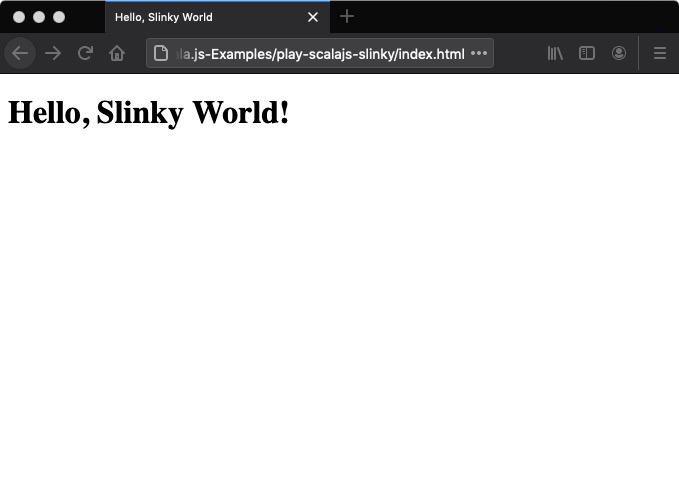 As the first step, create a sbt project as usual, such as with sbt new or my sbtmkdirs command. The complete project will contain these files:

The first three files are sbt files, and the last two files contain the Scala and HTML source code for our project.

The project/build.properties file identifies the sbt version that is used for this project:

The project/plugins.sbt file is where we indicate that the Scala.js sbt plugin:

As that link describes, this is plugin “facilitates compiling, running, and testing with Scala.js.” So this plugin lets you transpile your Scala/Scala.js code into JavaScript.

(You might be able to update this to a more modern Scala.js version, but I haven’t tested that yet.)

This is the simplest possible build.sbt file you’ll need to use Scala.js and Slinky (or very close to the simplest):

I think both the slinky-core and slinky-web libraries are required, but I may be wrong about that.

Next, create a file named SlinkyHelloWorld.scala in the src/main/scala/examples directory of your project with these contents:

If you’re comfortable with Scala 2, that looks like normal Scala code that uses third-party libraries, in this case, Slinky and Scala.js.

The ReactDOM.render code is the Slinky/React way to render something in a browser. In this case we’re rendering an HTML H1 tag in your browser. The getElementById("root") tag is the React way to say, “Render this H1 tag in the element that has an id value of "root".” You’ll see where this element is in the HTML file in the next section.

Finally, create an index.html in the root directory of the project with these contents:

A few points about this file:

With all the files in place, you can now compile/transpile your code. To do this, start sbt in the project’s root directory:

Then inside the sbt shell, run the fastOptJS command. This command is made available from the Scala.js/sbt plugin. Better yet, start it with the ~ before the command so it continuously compiles your source code:

That command is just like running ~compile or ~run in a “plain old Scala” project.

Assuming that works, you can now open the index.html file in a browser, such as with the open command on macOS:

When you do so, you should see a result like this in your browser:

Assuming that this worked, congratulations, you just created your first Slinky/Scala.js project.

I was only able to create this project because of these resources that were created by Mark C. Lewis: