I took some time today to work on the UI for the second version of my Android football game. This is my current best-guess, rough-sketch of what it should look like: 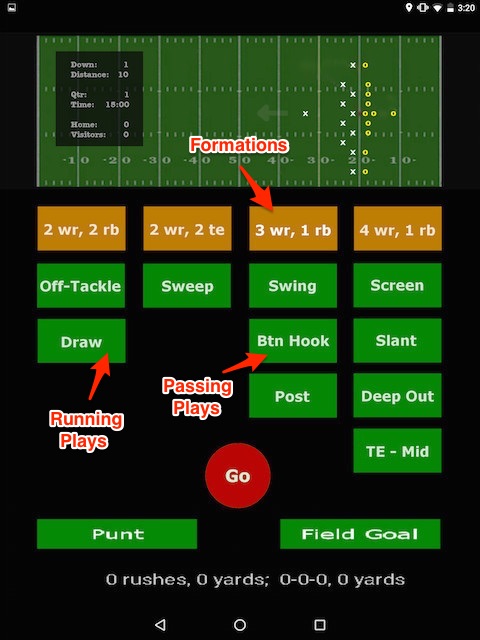 The basic idea is that when you’re on offense you (a) choose the formation, (b) choose the play, then (c) press Go to run the play. This gives a chance to change the formations and plays, especially once the defense gets smart enough to respond to what you’re doing.

The UI will respond to the user selecting the formation and play, something like this: 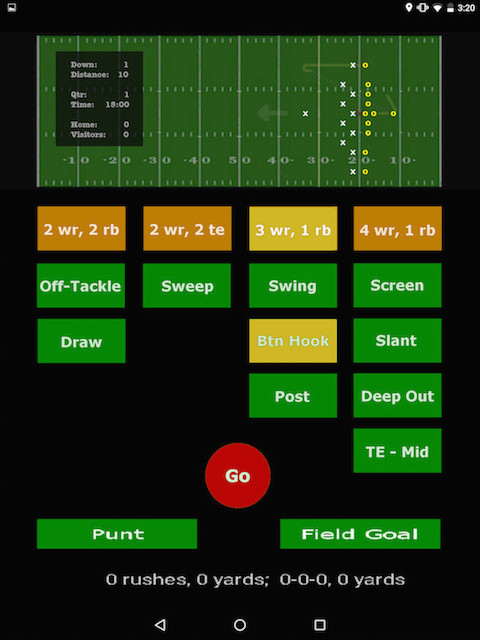 The ideas are (a) to show what the play is supposed to look like on the field (which I don’t do too well in this image), and (b) to show which buttons are selected. I want to change the way the buttons are highlighted, but this is a ballpark idea of what I want.

Playing the role of Defensive Coordinator is a little easier than this, though I need to decide how many times I can adjust the defensive formation based on the computer’s offensive formation, and a few other things like that.

The next time I get a couple of free days I’ll make these changes, but for today, at least I know where I want to go.

A thinking game (you’re the coordinator)

This isn’t intended to compete with Maddon Football. This game is more of a “Thinking Game” than a playing game. The idea is that you are the offensive coordinator on offense, and the defensive coordinator, and you have to beat the computer player. In the future the opponent could be another person over the internet, but for today the opponent is a bunch of computer algorithms.

FWIW, the first version of the game — which is the current version — looks like this: 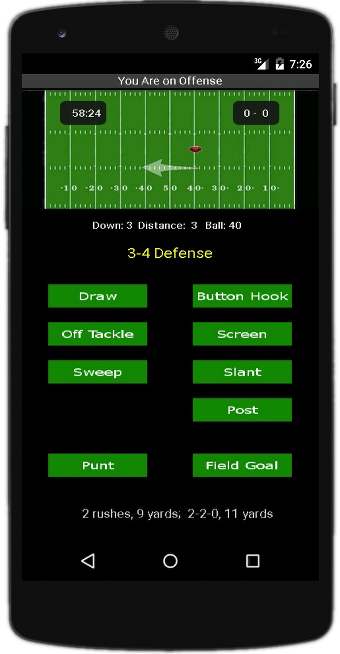 This version is functional. It works, and it’s not too horrible. I don’t love it, but I don’t hate it, either. I can play a full game in about ten minutes, and there are times I play several games in a row before I decide I better do something else with my time. :)

A thing I like about the game is that it makes you think like a head coach and/or coordinator. For instance, when I was thinking about what I do and don’t like about the current game, I came up with these thoughts:

A great thing about Maddon is that you can be the QB and see how the defensive players react to the patterns of multiple receivers, then throw to the open receiver. I don’t know that this game will ever evolve that far, but it’s still interesting to try to be the head coach or coordinator.