I don't write about commercial applications very often, but after using SnapNDrag so much over the last year, I have to say, it's far and away my favorite Mac screen capture software application (Mac app).

SnapNDrag is one of those simple "It does one thing, and does it well" Mac software applications. It lets you easily create a screenshot of a Mac application window, or the complete Mac screen, or a timed picture of the current Mac screen (which is very useful when you want to take a picture of Google search trends for the term "facebook delete account", for example).

Here's a Mac screenshot of the SnapNDrag main window: 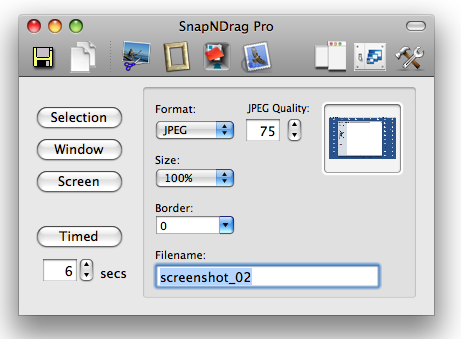 I know this sounds like an advertisement, but in full disclosure, I have to say that I don't know anyone at YellowMug (SnapNDrag's company), I've never met them, and wouldn't know them if I passed them on the street. I just like their Mac screenshot software app, and thought it was worthy of mention here.

SnapNDrag is currently just $5.95, and I think that's a pretty good deal for what it does. I think they also have a free version that displays ads when you use it, but I bought a license.

I should also mention that if you don't want to pay for a Mac screenshot software app like SnapNDrag, you can also use these Mac screenshot (screen capture) keystrokes.

While this approach is free, it's a cumbersome way to create Mac screen capture images if you're going to do this a lot. Pressing "Command-Control-Shift-4, then space, then click a window" to take a snapshot of a Mac window, and then trying to find the picture on your desktop sounds like a lot of work to me. But hey, it's free.