Summary: The Mediator Design Pattern is demonstrated in a Java example — i.e., this is a Java Mediator Pattern example.

In object oriented programming, "loose coupling" between objects is a good thing — it promotes flexibility and reusability. However, in some applications, such as GUI programming, you can easily run into circumstances where many objects seem to need to know about each other. For instance, in a Java/Swing GUI, when you make a change in one part of a dialog, window, or frame, other parts of the GUI may also need to be updated, or otherwise respond to this change.

There are several ways to update other GUI components like this, but tightly coupling the components by letting each component know about the other component is not a good approach.

A better way to achieve the desired effect while also promoting loose coupling is to implement the Mediator design pattern. In this article I'll discuss the Mediator Design Pattern in a Java example.

The Mediator Design Pattern is a very good solution to the problem described above. In short, instead of tightly coupling your GUI components together, you create a "mediator" object, and that class is the only object that is aware of all the other objects, and all message-passing goes through this mediator.

Without knowing it, I began using this pattern 10-12 years ago while trying to solve this problem in my own GUI applications. I had gotten in the habit of using Java GUI builder tools like JBuilder and Visual Cafe. These tools seemed to make Java GUI development easier, but in reality, several things they did made long-term GUI maintenance more difficult by tightly coupling the GUI components. Every change to my GUI applications seemed very painful.

I finally got away from this problem when I learned about the MVC Pattern, specifically the MVC Pattern diagram shown here. When I learned to follow a pattern of having a controller for major process in a software system, I inadvertently started implementing the Mediator pattern. 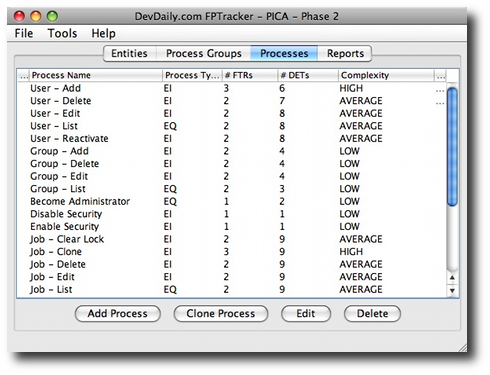 (The main window of the FPTracker application.)

As you can see, the application has four primary tabs with these labels:

In my Java code I created four main controllers that corresponded to each of these tabs, specifically these:

For each controller there is also a main corresponding GUI panel:

Getting to my Java Mediator pattern example, let's look at just the "Processes" tab. As you can see from the figure above, the Processes panel allows these four main actions:

The dialog that appears when a user clicks the "Add Process" button looks like this: 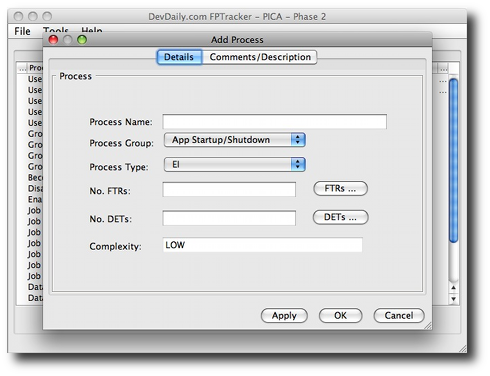 Without getting into all the details, there are a few important things going on here:

Tying all these things together, and also trying to keep my implementation flexible and loosely coupled, I created a design based on the Mediator design pattern that can be described like this:

In short, the AddProcessController knows about all these GUI components, and has change listeners attached to the GUI fields it needs to listen to, and it also has get/set methods to all these fields.

Why this is good

The reason this design is good is that I can change anything I want at any time with minimal effect on the other system components. I can redesign my dialog, change the DETs and FTRs implementation, and pretty much anything else, and the only changes needed are to (a) those components and (b) my mediator class.

On the other hand, if each GUI element was tightly coupled to every other GUI element, well, any change would be a significant rewrite, and I'd be tracking down event interactions for a long time.

I could write much more about this code, and in fact I already have. If you'd like to know a lot more details about this Java Mediator Pattern implementation, please see my Java Model View Controller (MVC) tutorial/example.

Benefits of the Mediator Pattern

As mentioned above, the benefits of the Mediator Design Pattern include:

Consequences of the Mediator Pattern

One simple refactoring fix to having a "God object" is to refactor your code as I just described; break a large mediator class down into smaller classes, where each mediator only knows about the objects it really needs to know. As a practical matter, this is when I usually break out the UML, or at least CRC cards, so I can think about how this system needs to be refactored.

A second refactoring fix is to make sure your code logic is in the right places. Think of your mediator class as being a traffic cop or coordinator between all these different objects, and also know that it's not going to be reusable if you switch from a Java Swing GUI app to a Java web app or mobile phone app. As you switch from Java GUI to web app to mobile app, you'll probably have to throw out your Java GUI as well as your Java mediator class, but, the logic behind these classes -- the business logic -- will be the same in each environment. Therefore, where should this business logic be kept? When you answer this question, it will also help to keep your Java mediator pattern class from becoming a "God class".

I hope this discussion of a Java Mediator Design Pattern has been helpful. If you have any questions or comments, please leave a note below, and I'll be glad to reply.