By Alvin Alexander. Last updated: June 4, 2016
any donation (through ko-fi.com) will help keep this site running
thanks!

I just downloaded and installed the Google Chrome beta for Mac OS X, and so far, so sweet. It's quick, and after almost 60 minutes of visiting as many sites as I could, loading up a bunch of tabs, and applying some Google themes, I haven't found any bugs yet.

I download Google Chrome for Mac OS X at this download link. This downloaded a file named googlechrome-4.0.249.30-beta.dmg. Installation was just like most Mac OS X application installs; just drag the Chrome icon to the Applications folder. The installation size showed as 49.5MB.

After installing Chrome and starting it up, here's the first screen you'll see: 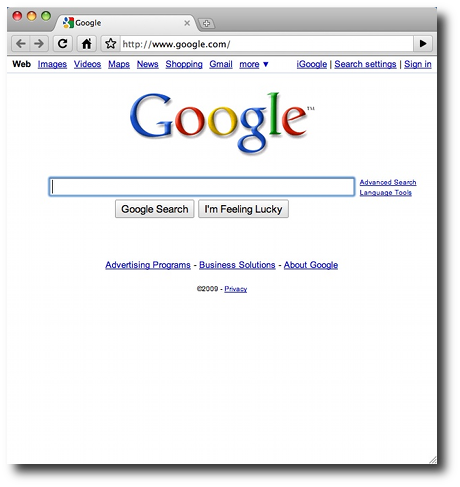 Of course after looking at that page, the next page I looked at was the devdaily.com website, which looks like this: 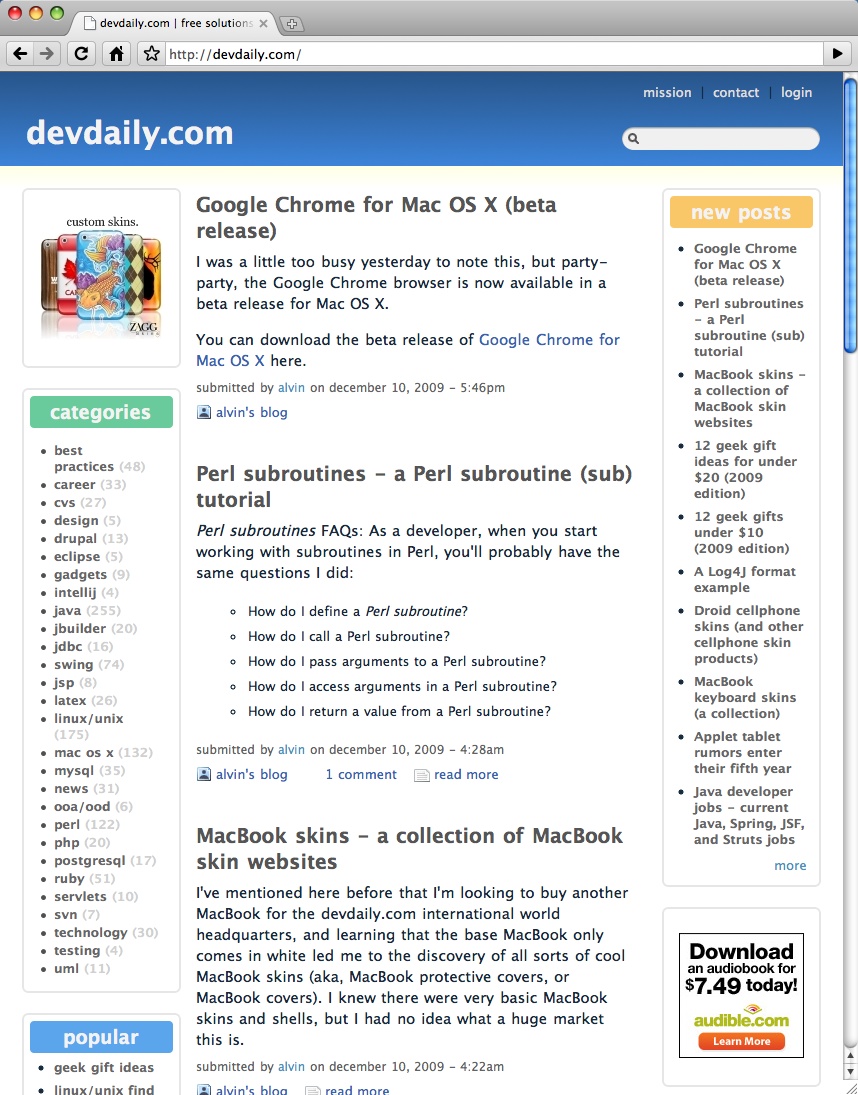 Glad to see there are no problems there. :)

I might be a little crazy, or perhaps just a bit of a geek, but I have Firefox, Safari, Camino, and now Chrome installed. (Hmm, I need to download Opera and give it a spin, lol.)

Of these browsers, Chrome OS X is very impressive. I haven't done any official speed tests, but when I hit some sites it's scary fast. Sites like iGoogle are so fast it's scary. Gmail loads significantly faster than Firefox. Other sites like the NY Times, Apple.com, bing, slashdot, Yahoo Mail, and digg are all zippy and look just fine.

Without being able to find a bug yet, I'll just mention a couple of features and share a few Chrome for OS X images.

When using Chrome on OS X, a few things stand out. The first thing is the non-standard use of tabs. Some Mac OS X purists might not like this, but I have no problem with it at all. When I use Firefox, Safari, and Camino, sometimes they look so much alike I can't tell which is which. With Chrome, one look at the browser and you know what you're using. Plus, it looks just fine, especially with a theme added in.

The area where you typically type in a URL in your browser is referred to as the Omnibox in Chrome. You'll notice it right away, because it's always working for you, which feels like a good thing. Type in a common site, like nytimes.com, and it comes up in the drop-down list for you very fast. Once you've compiled a little history, the sites you've visited will also show up here.

Whenever you create a new tab, Chrome shows you a little of your most-visited websites, just like Safari 4.x. It also shows the pages/tabs you've closed recently, and further shows images from the Chrome theme you've installed, which is very nice.

These two images will give you an idea of what the Chrome Tab Page looks like. First, here's what it looked like after visiting a few websites: 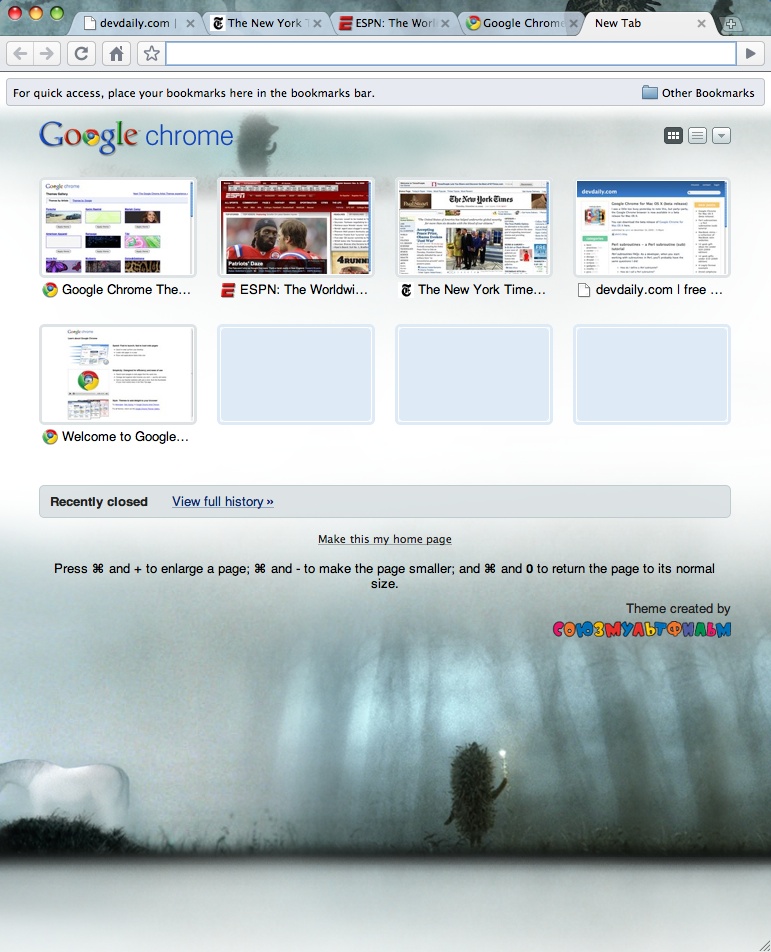 And here's what it looked like after visiting more websites, and closing some tabs: 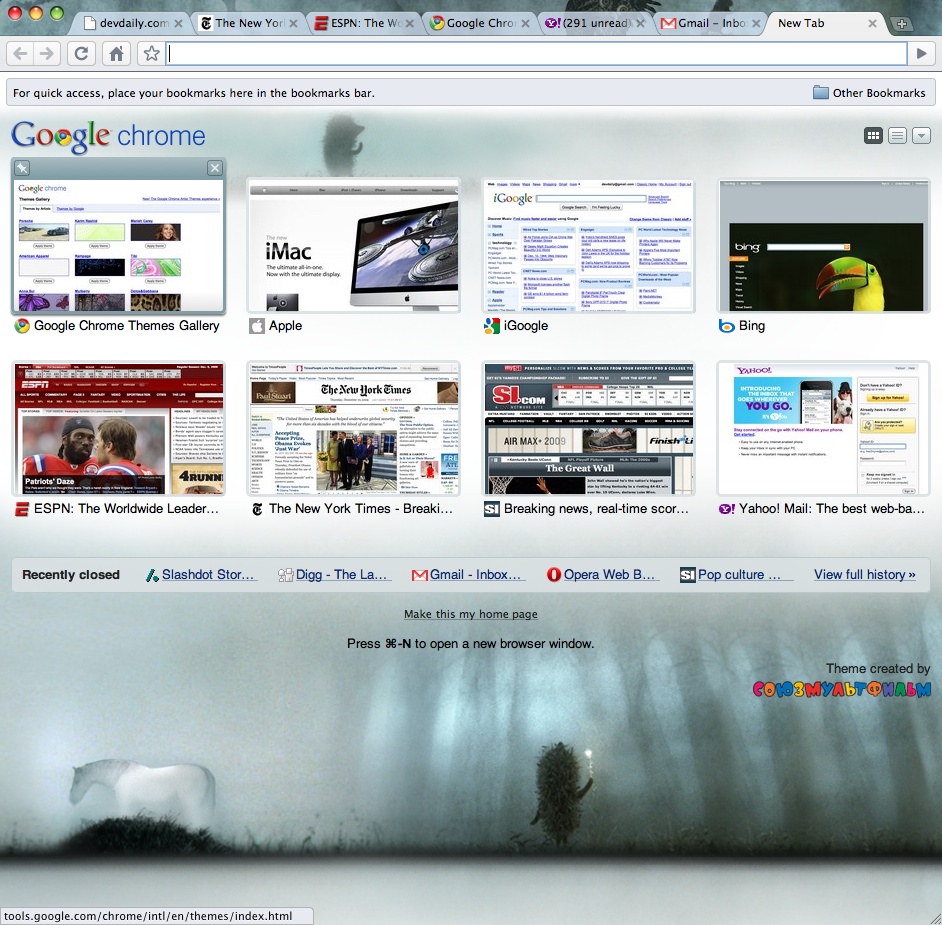 After the speed and unique look and feel of Chrome for OS X, my favorite early feature is the collection of Chrome themes. Many websites and applications are beginning to show us how much more life there can be in software when art and design is applied, and IMHO, Chrome looks really nice with a good theme applied.

Google Chrome for Mac OS X just became my second-favorite Mac OS X browser (behind Firefox). In a few days it may become my favorite, but we'll have to see how it does after extended use.

Either way, the Chrome OS X browser is very worthy of a download.

Before I go, here's a collection of Google Chrome for Mac OS X links that were used in this review:

A month has come and gone, and I'm still using Chrome, but the "beta" nature of Chrome does rear it's ugly head from time to time. Here are a few issues I've encountered:

For a Beta product Chrome is good, and it's never crashed on me, but it does have these problems.