Note: I originally wrote this article in 2014. I’ve made a few updates to it, so the “updated date” shown on the article is more recent than that, but all of the events described in the article happened in 2014.

I went to the ER one day late last year with severe chest pain. I exercise a lot and had been eating well, so I didn’t think I was having a heart attack, but the pain just kept getting worse, so off I went.

Doctors never figured out what that pain was from, and used the term “costochondritis” to categorize it. (I think costochondritis is loosely translated as, “We have no idea”, “Beats us”, or, “We think you’re making it up.”) But in a CT scan of my chest the doctors noticed several “nodules” in my thyroid, and suggested further testing.

As I learned in 2016 and 2017, I have a disease named mast cell activation disease, and a part of that disease known as Kounis Syndrome (also known as “allergic angina”) may have been the cause of this severe chest pain episode.

Following a thyroid ultrasound and biopsy of the tumors — coupled with a long series of tests to make sure my heart was okay — it appeared that at least one of the tumors might be cancerous. As a result, nine days ago I had a total thyroidectomy. Here are a few notes on my recovery process following the thyroidectomy surgery.

Surgery started at 8:15am, and after greeting everyone in the operating room and laying my head back into something that looked like an ashtray (to help open/extend my neck area), I don’t remember anything until after noon. I’m told that the surgery lasted over two hours, and that I was moved from the recovery area to my hospital room around 11:15am.

The first thing I remember is regaining consciousness some time after noon. I may have been conscious before then, but my first memory is around noon. I remember feeling groggy at 1pm, less groggy by 2pm, and almost normal by 3pm. Nurses were with me constantly, checking my vital signs, and giving me pain medication through the IV. I confess, I was happy to be alive; the surgeon said this can be a tough surgery.

This is my fifth operation, and I’ve never been able to pee after an operation, always getting a catheter. This time the nurse kept asking me to try to urinate, which I couldn’t do. I was finally able to pee a very little bit at 6:30pm, then a little more at 7pm. This was great because (a) I thought my bladder was going to burst, and (b) I didn’t want to have a catheter inserted into you know where. I disliked this nurse very much until 6:30 — imagine not being able to pee for over 10 hours — but I was very happy with her after that.

My throat was sore, but it was sore on the inside, from the tubes they shove down your throat during surgery. The area where the thyroid was removed only hurt when I coughed or sneezed. After a couple of painful sneezes I took some Zyrtec to hopefully help stop the sneezing. Although coughing and sneezing hurt, it wasn’t a sharp pain, just a fairly strong but dull pain.

I walked a few times this day, slowly at first, then a little bit faster as the day went on.

Surprisingly I was able to eat normally in the afternoon and evening. Swallowing was a little sore, but again, 98% of that was due to the tubes pushed down my throat during surgery, not because of the thyroidectomy itself.

This photo shows the bandage that covered the incision area: 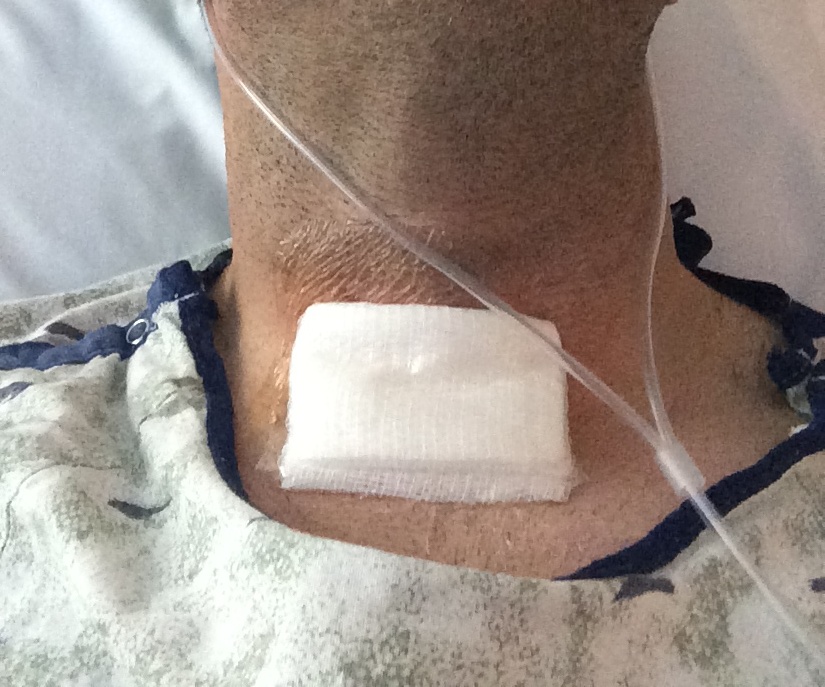 Other than being tired from a lack of sleep, I felt fine this morning.

I watched a movie late last night, but didn’t sleep much during the night. The hospital bed was uncomfortable, and the nurses came in every two to four hours to check on me. (This day was my birthday, and two nurses sang “Happy Birthday” to me at 4am, which was cute.)

A nurse did a blood test around 5am to test for (a) signs of infection and (b) to see whether my calcium level had dropped. During a thyroidectomy the surgeon can accidentally damage your parathyroid glands, which will cause a calcium drop (for the rest of your life, I think). The blood test came back several hours later, and everything was fine.

A friend was with me, and as the morning went on I was anxious to get out of the hospital. The surgeon stopped in once around 8am, and told me he’d be back around noon to let me out if I still felt well. He didn’t come back until about 2pm, after which they finally released me.

We went back to the hotel, then went out for some dinner a little later. I continued to feel remarkably well, only having pain when coughing and sneezing. I don’t like the way strong painkillers make me feel, so I was only taking two ibuprofen every six hours by this point.

The evening was uneventful, and I was glad to get a good night’s sleep.

One thing I noticed today is that my left knee is a little swollen. I knew it was stiff when I was in the hospital, but I didn’t look at it. Something must have happened when I was knocked out, but I don’t know what that was. I’ll ask my surgeon when I have my followup appointment with him.

The rest of the recovery process was amazingly easy. I took very few ibuprofen, and quit taking them altogether on the third or fourth day.

We removed the large, thick bandage over the incision site after 48 hours. Underneath that I found that the incision was held together with a series of seven tape strips: 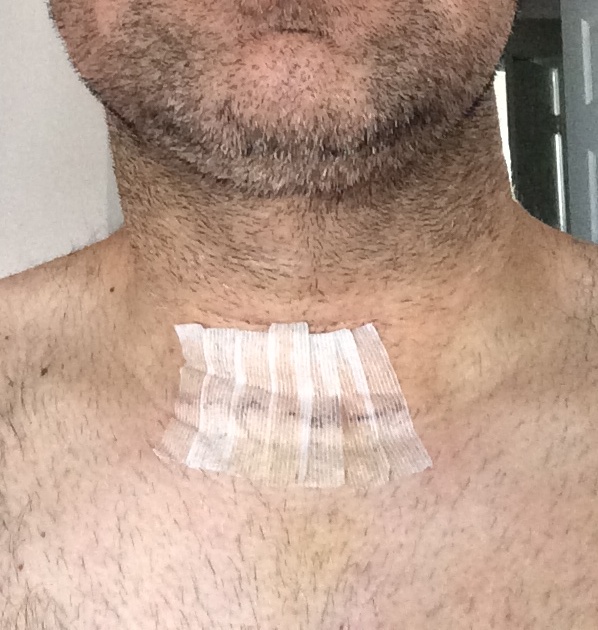 As you can tell, there’s some bruising, they shaved the top of my chest, and I need a shave.

I should say that my surgeon came highly recommended. My endocrinologist recommended one surgeon, and when I mentioned that surgeon to other doctors, two of them said, “You don’t want that guy, you want this other guy.”

I went with their suggestion, and despite this other surgeon being at least in his 60s, I suspect that the ease of the recovery has to do with him. He took only a little more than two hours to perform a surgery (total thyroidectomy) that other surgeons require four hours to complete.

I mentioned this story to one of the nurses who helped take care of me, and he agreed with the recommendation. He said my surgeon was the equivalent of a basketball “gym rat”: always in the operating room, and someone who loved what he did, while the first guy was younger and less experienced.

Lesson learned: When someone is cutting into your throat, take the time to find the best surgeon.

I started driving again yesterday, and probably could have driven by Day 4 or 5, with one exception: I couldn’t turn my neck from side to side to see all the traffic, and would have had to rely on my mirrors quite a bit. It was a little painful to move my head from side to side yesterday, but it was do-able, and whenever I had to park I used a pull-through parking spot.

I should note that the swelling at the incision site has gone down quite a bit now. It’s not completely flat by any means, but there is very little swelling, and no pain during normal activities.

After my thyroid was removed, they performed a quick biopsy in the hospital, and those results showed the tumors were benign. After their initial tests they sent the thyroid off for another longer, more accurate biopsy, and I should know those results later today or tomorrow.

I talked to my surgeon’s PA this afternoon, and she said that the pathology report from the complete/thorough biopsy tested positive for cancer. The type of cancer is known as papillary thyroid cancer, and it’s the most common type of thyroid cancer. It’s also slow-growing, and people have a terrific survival rate from it, something like 95% over ten years. The PA said that she’s “never seen anyone die from it.”

She also noted that “the margins were clear.” I think I know what that means, but I need to research it, and ask the surgeon about it next week to be sure.

In other news, with a little bit of exercise yesterday and today my neck is a bit more sore, and I took some ibuprofen today. I’m surprised the doctors and nurses didn’t recommend icing the area; it seems like that would help reduce the swelling. I need to ask about that.

I still have the bandages on my neck from the surgery. The PA said I could remove them if I wanted to, but they don’t bother me, so I’m leaving them on.

Apparently my post-surgical synthroid dose is too high. All day I felt like I was taking speed. I have to admit, I got a lot done, but I didn’t get to sleep until 2am, and this probably isn’t good. I took a smaller synthroid dose this morning, and will call my endocrinologist about the dose tomorrow. I know it’s supposed to be 0.72 mcg of synthroid per pound of body weight, but for some reason that may be too high for me.

Someone said yesterday, “Congratulations, you’re a cancer survivor.” That sounds really weird. I know it’s a slow-growing cancer so I haven’t thought about it too much, but it’s weird to hear those words said about you.

I have a followup appointment with my surgeon on Day 12. They usually do that a little sooner, but he’s traveling now, and his schedule is backed up a few additional days. Since I’m not having any complications, this isn’t a big deal.

Because the tumors tested positive for cancer, I also have an appointment set up with my endocrinologist to see whether she wants to follow up with “radioactive iodine” treatments. I’ll write about that when I know more.