WARNING: Chest pain is a serious life or death matter. If you’re experiencing chest pain right now, don’t waste any time reading this article — get yourself to a hospital.

Initial signs and symptoms of my pericarditis

On Sunday, November 3, 2019, I had just finished lunch, looked at the clock, and saw that I could fit in about an hour of work before the Denver Broncos game started. Despite Denver’s 2-6 record, I was looking forward to see how Broncos’ quarterback Brandon Allen would do in his first career start following Joe Flacco’s neck injury.

A minute later I had severe chest pain. It wasn’t in the middle of my chest, but it was on the left side of the left chest/breast area. To the best of my memory, I went from feeling perfectly fine to having severe pain in a matter of moments.

At first I thought I was having an allergic reaction to lunch — Wolfgang Puck’s potato soup, which I don’t think I’ll ever eat again. Because I have a rare blood disease known as Mast Cell Activation Syndrome (MCAS) and had previously gone through an episode of allergic angina (what I call a “fake heart attack”) with a resulting angiogram I quickly got up and took both Gas-X and a large dose of Benadryl.

I was in a lot of pain at this point — and the pain was significantly worse when I moved. Having gone through the allergic angina episode before and also living alone, I decided to lay down for a while to see if the Benadryl would help. (This is a point where normal people should have already called 911 or had someone help them get to the hospital.) During this time I found that I could lay on my back or on my right side, but laying on my left side made the pain even worse.

I fell asleep for a little while, and when I woke up and tried to move, I realized those things didn’t help, so I took some aspirin (in case I was having a heart attack) and liquid Maalox (in case it was a stomach thing). In case this was a MCAS allergic reaction, I eventually also took three Zyrtec pills.

Final things to say about the pain and symptoms at this point are:

At the hospital emergency department

At the emergency department check-in, a young nurse was taking a very long time to work with the computer to type in my medications. Fortunately another nurse came up from the back and told her, “We get chest pain people in first and fast,” and they helped me get back to the ER area.

The emergency room nurses and doctors asked about my pain, and I told them about all of the symptoms I described above. They quickly:

Over time they would run all of the tests shown in this image: 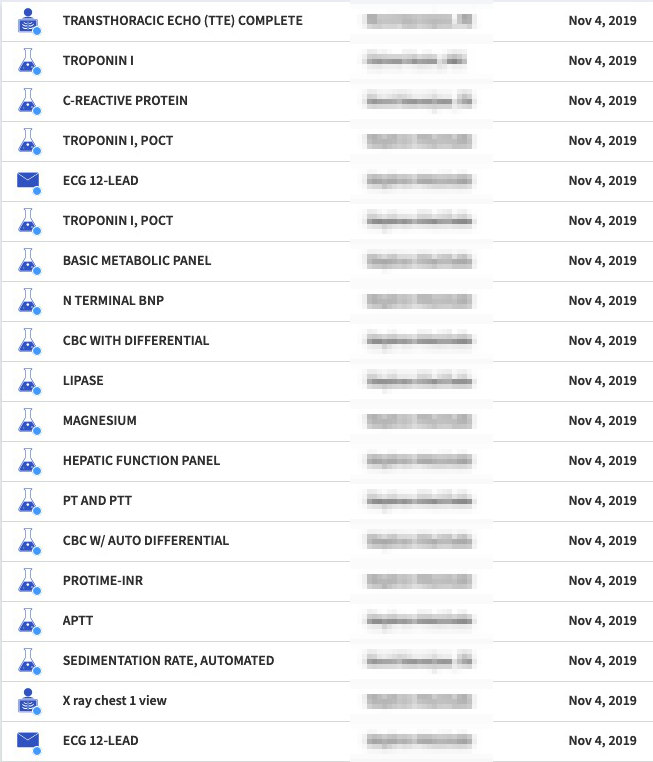 All of the initial tests ruled out things like a heart attack or blood clot. Until this point I was guessing that I either had (a) the world’s worst gas or (b) a blood clot, because I knew what the allergic angina pain felt like (extreme pain, especially with movement, hard to breathe, and a weight on the chest), and this pain was different, in particular being more on the left side, and without the other heart attack symptoms.

My blood pressure was very high at this point, something like 180/110, so they gave me some nitroglycerin to help lower that. That gave me a “flushing” sensation, but that may have been due to the MCAS.

They also gave me more Benadryl, and eventually gave me some Toradol for the pain, though it didn’t seem to help.

Once the ER people had done everything they knew to do, they admitted me to the Cardiac area of the hospital (the “cardiac wing”).

In the cardiac wing

In the cardiac area they ran more of the same tests, and after I told the doctor there that the pain was worse when I laid on my left side, she said that was helpful to know, and that was the first time anyone mentioned pericarditis.

To help determine if I had pericarditis, she ordered an ultrasound of my heart, something called an echocardiogram.

For the echocardiogram you’re apparently supposed to lay on your left side, but I told the ultrasound woman that that made the pain worse, and she said I could stay on my back. Unfortunately she didn’t say anything at the time, but this made the ultrasound images less clear, as I would find out from the doctor later. Had I known that I might have tried to lay on my left side, but she initially told me it would take about twenty minutes, and I didn’t know if I could take the pain that long.

Some time later the doctor came in and said the images weren’t clear, but that they were going by the symptoms, and assuming that I had pericarditis. They gave me another shot of Toradol, then came back 45 minutes later, and this time the pain was reduced. It could still peak at an 8 or so, but there were longer periods without pain, or where the pain was a 2-5 instead of an 8.

The cardiac doctor (cardiologist) told me that pericarditis is caused by a virus, but they don’t test for the virus since the treatment is always the same: they prescribe a couple of powerful NSAIDs, Colchicine and Indomethacin (Indocin), as shown in this image:

They also said that if you’re going to have severe chest pain like this, pericarditis is one of the best things you can hope for, as the treatment just involves taking these NSAIDs and resting (as opposed to an invasive procedure, such as having an angiogram or something else). They also said that even once you feel better, you shouldn’t over-exert yourself for a while.

This image shows the discharge information the hospital gave me about pericarditis: 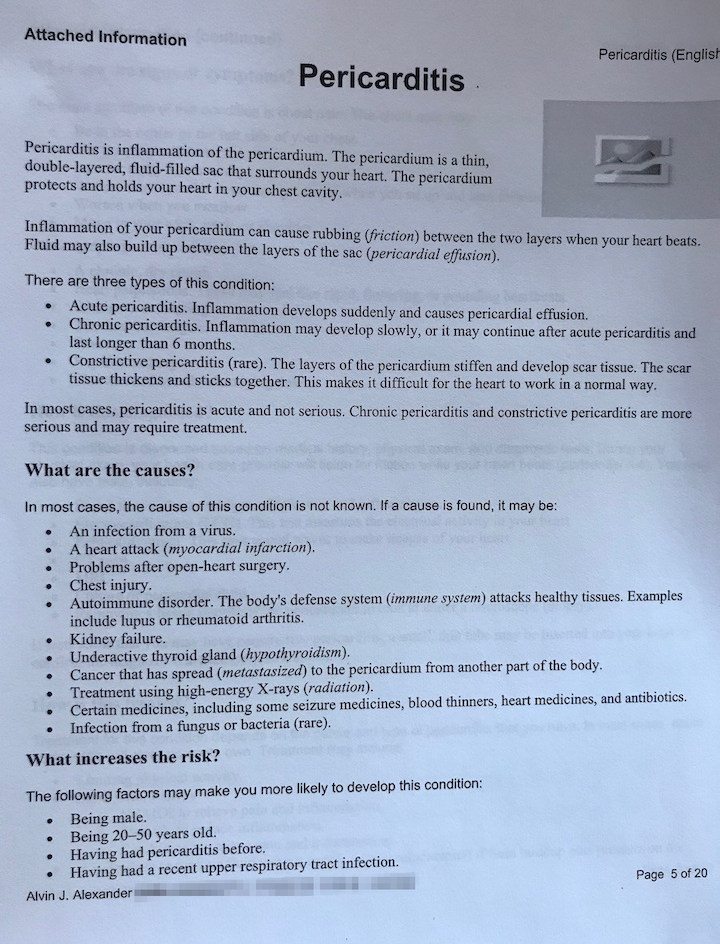 The initial pain reduction from the second dose of Toradol helped quite a bit, so I assumed that recovery would be fast, but it has not been. Here are my notes.

Got home, took the Colchicine and Indomethacin as prescribed, and slept a lot, since I barely slept from Sunday evening until I was discharged Monday afternoon.

The pain was a little less intermittent than it was on Sunday, but it was about the same as it was when I left the hospital. I ended up resting most of the day.

During the morning the pain was still the same, and I was beginning to wonder about the diagnosis. I rested again this day, and by the evening I thought I might have been another 10% better.

There were some brief periods without pain today, but in general it was about the same as Wednesday, maybe a little better.

This morning started off better, but then the pain returned. Finally during this afternoon and evening there was a significant reduction in the pain. When it hurt the pain was still a 6-8, but I was now going much longer periods without any pain.

I’m writing these notes on Saturday morning, and I still have pain, but as with yesterday evening, I have fairly long stretches without pain. This morning was the first morning where I sat up in bed and didn’t have any chest pain immediately.

More on the pericarditis symptoms

I should note that during the worst of this, you develop a fear of moving. For example, you might be sitting still or laying down, and then have to get up for something, such as having to go to the bathroom. At this point you have that fear of moving because you know the chest pain is going to be an 8 or 9.

More on the pericarditis treatment

I have a followup appointment with a cardiologist on Tuesday — eight days after my hospital visit — so I should know more about further pericarditis treatment at that time. If it’s anything more than “continue to take the NSAIDs,” I’ll update this article at that time.