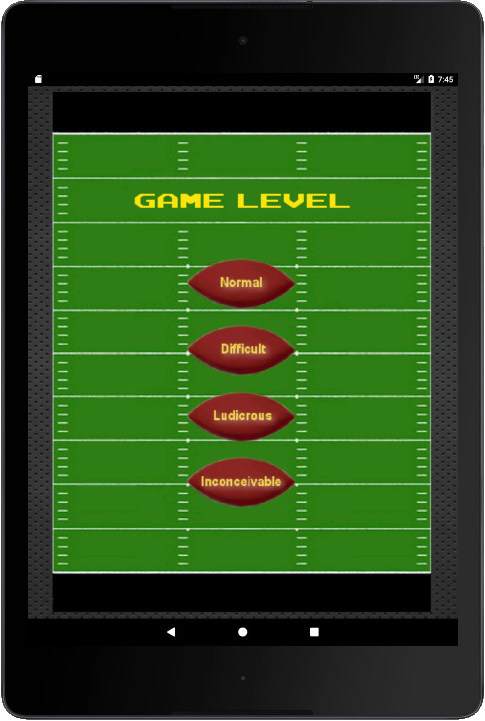 Very roughly, the game levels are:

As I mention in the XO Play Help docs, I’d call this Version 0.3 if I could, but the Google Play Store makes me start version numbers with a “1”, so the new version released in July, 2019 is Version 1.3. Here’s what’s new:

This image shows the new visual features in the game: 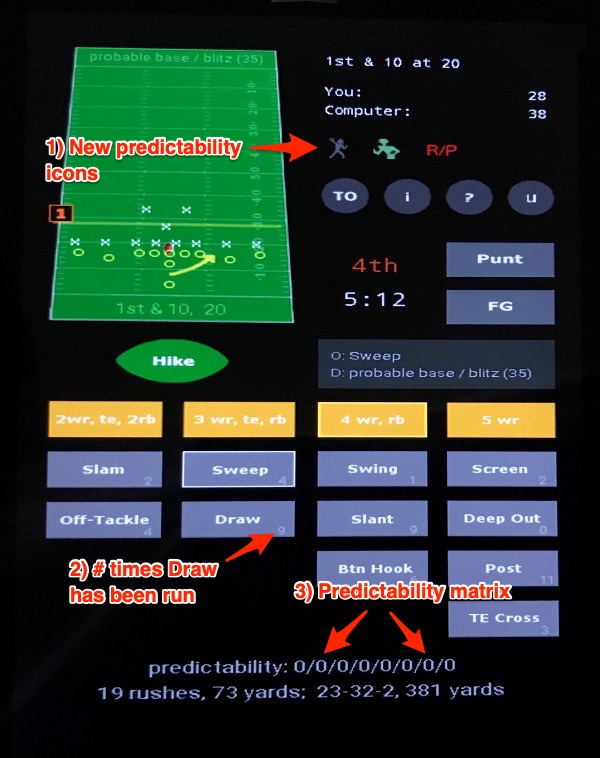 The following documentation provides more information about how to play the game. Please note that everything below was written for Version 1.0 of XO Play.

The first release of XO Play is now available for Android phones and tablets.

At some point I’ll add some more details here about how the game works, but I really hope it’s pretty obvious after the first few taps. Because of that, I’m just going to share some images here at this time.

Here are some images that help to show what XO Play looks like, and how to get started with it.

First, this is what the current XO Play app icon looks like:

Once play begins, this is what it looks like when you call a Deep Out on the first play of the game: 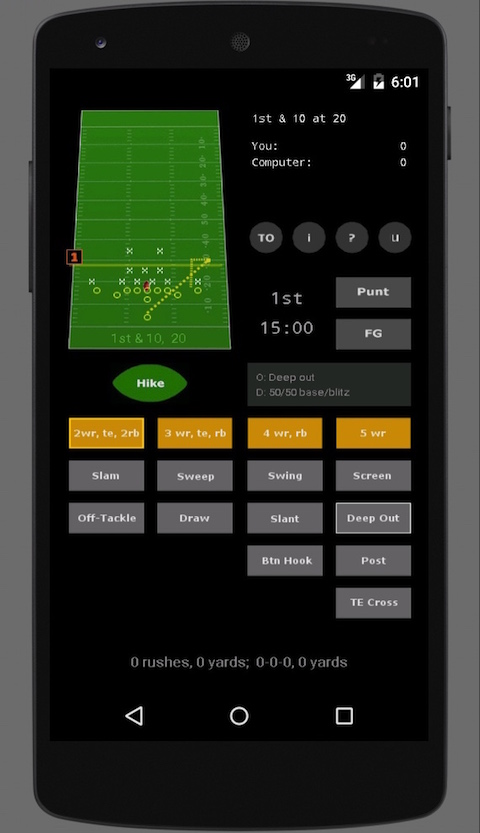 To call a play like that, all you have to do is (a) tap a desired formation, and then (b) tap the play button, in this case the “Deep Out” button. Once you’ve selected a formation and a play the “Hike” button will appear; just tap it to run the play.

A little while later, this is what a Screen Pass play call looks like: 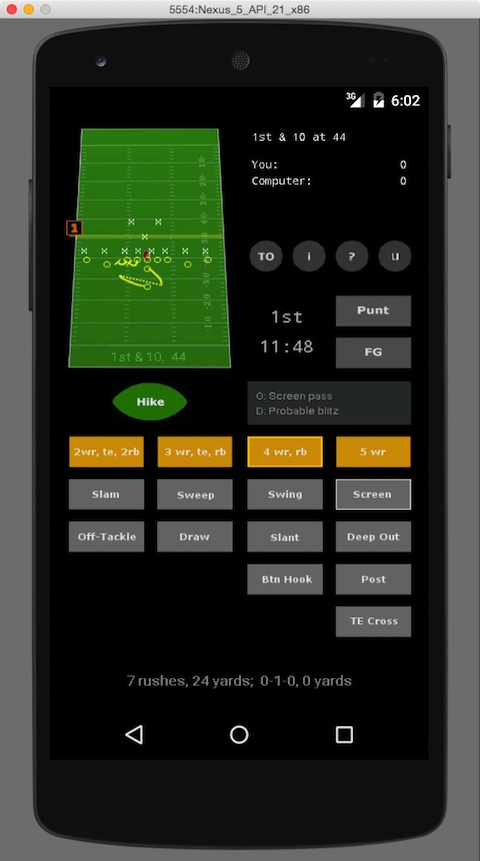 This is the main screen for when you’re playing on defense: 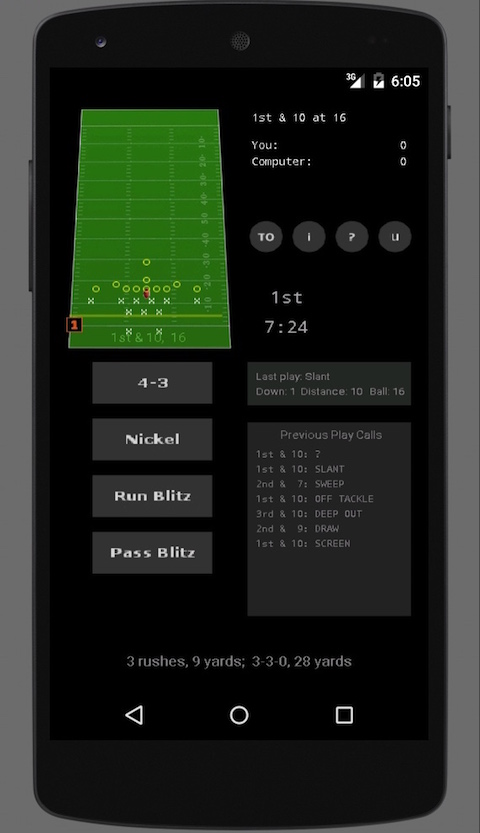 When you’re on defense, the computer will select an offensive play, and once you tap the defense you want, the play will be run. (There is no “Hike” button on this side of the ball, not yet, anyway. I’ve spent much more time working on the offense than I have spent on the defense.)

Images from the previous version of the football game

From the user interface of the previous version of the app, this is what a 2 WR, 1 TE, 2 RB formation looks like with a “Slam” play called: 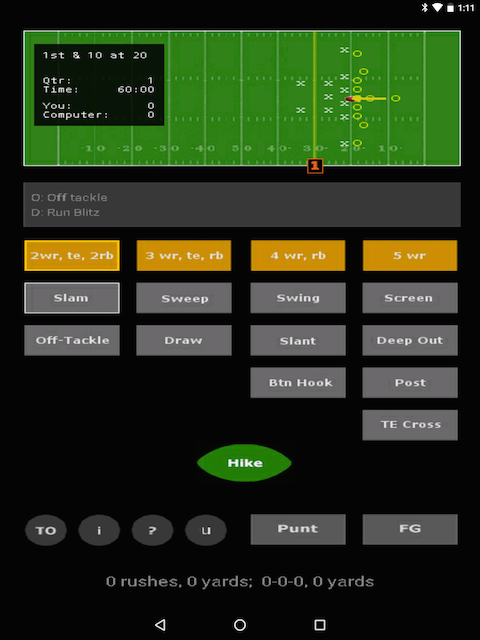 Here’s what a Draw play called on 3rd Down looks like: 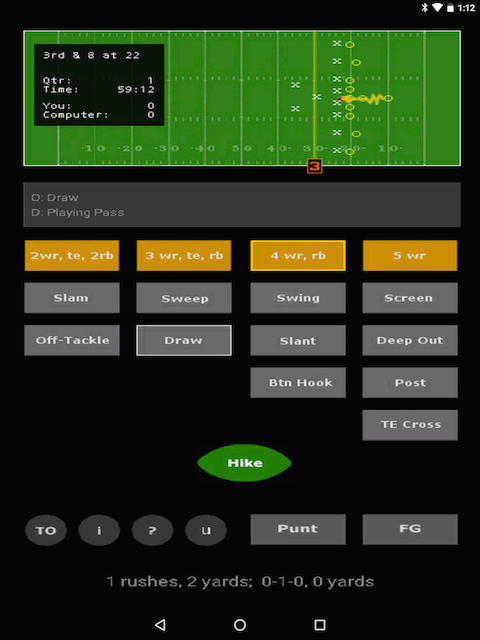 You may have noticed that the game has a timekeeping bug, or “feature,” as I prefer to call it: 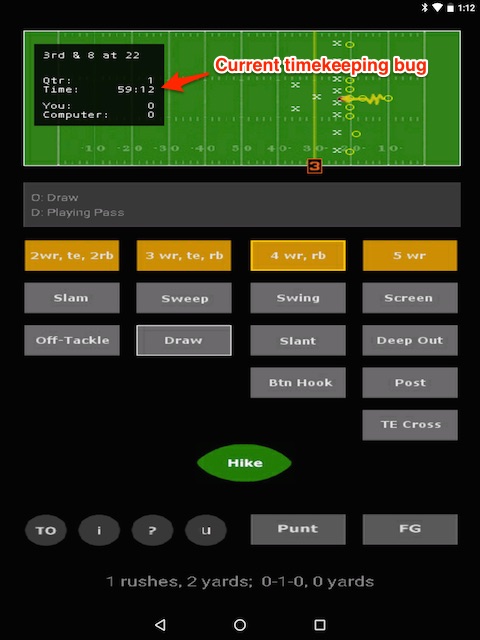 This bug/feature is just a result of the limited time I’ve had to work on the game so far. Right now the game doesn’t really have four quarters — it’s just a 60-minute long game. (But even then, you can keep playing the game after the first 60 minutes, if you want to do that for some reason.)

Throughout the game, and at the end of the game, you can currently see running and passing statistics like this: 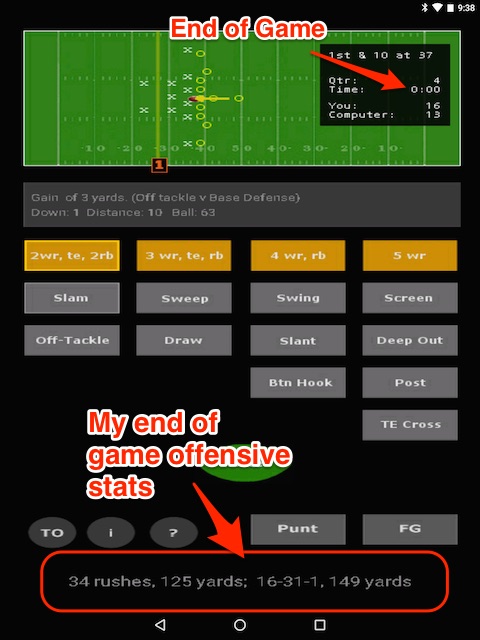 As you’ll see in the images below, this will be greatly improved during the Version 1 development of the app.

The game is heavily based on statistics. Right now I’ve estimated the statistics for each offensive play vs each defensive play/formation. The data for Off-Tackle runs currently looks like this: 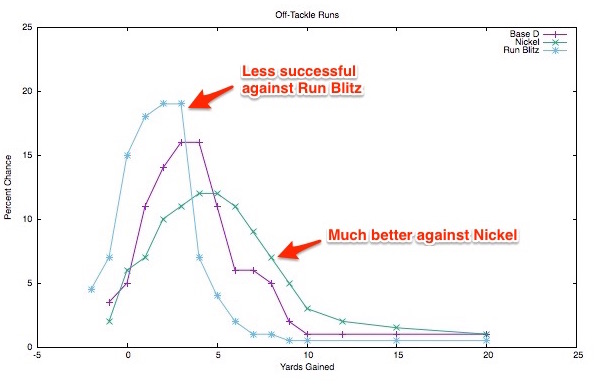 The data for Slant passes currently looks like this: 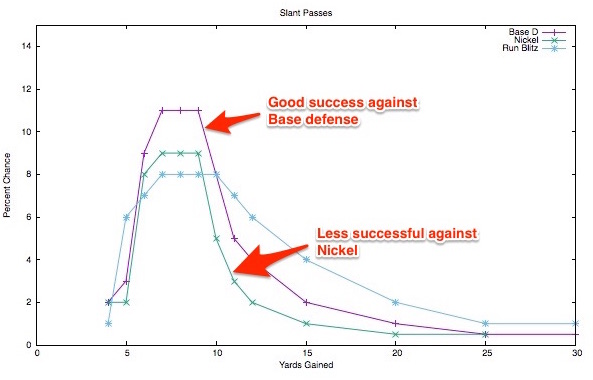 Getting back to game stats, during the game and at the end of the game you’ll be able to see stats like this: 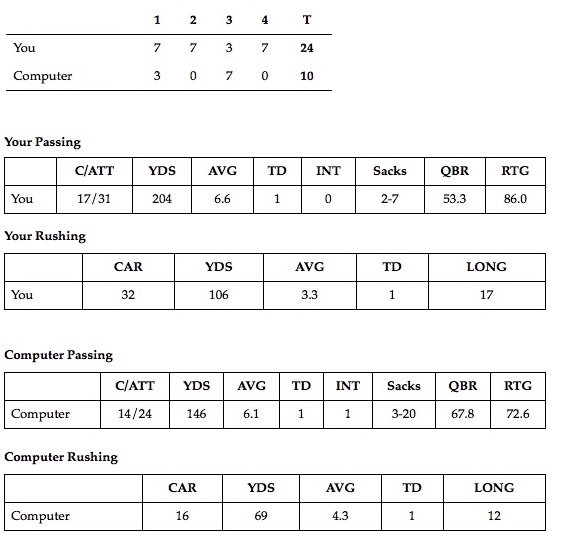 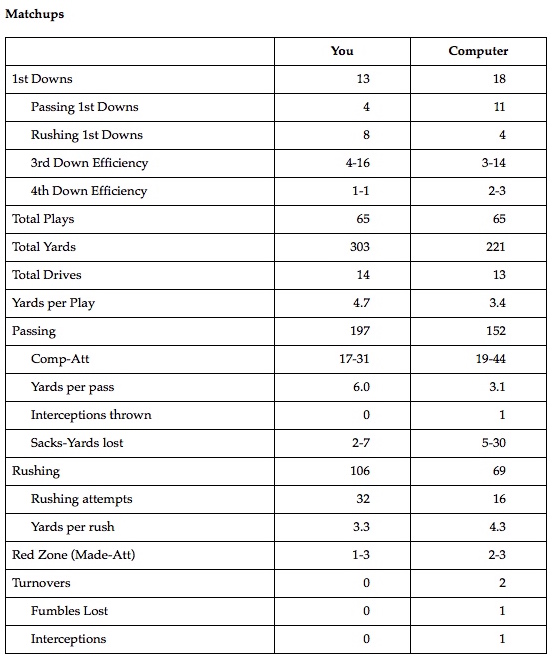 You’ll be able to see play-calling stats like this: 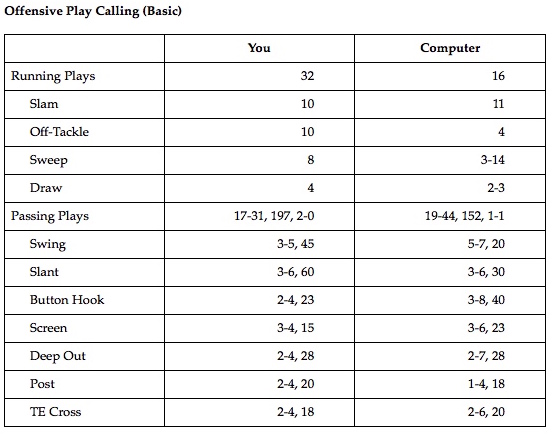 Eventually you’ll be able to see detailed “Heat Map” play-calling stats like this: 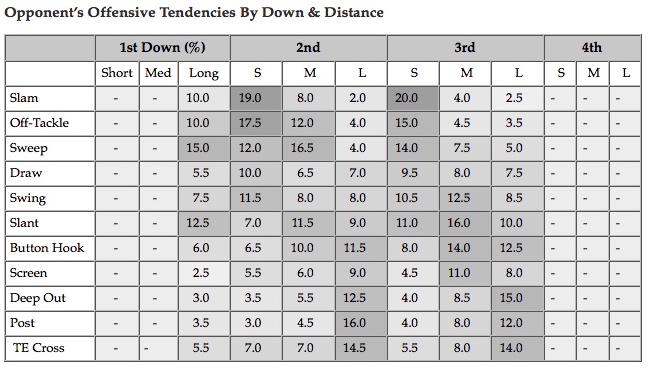 Inside the game these stats will be available through popup windows like this one: 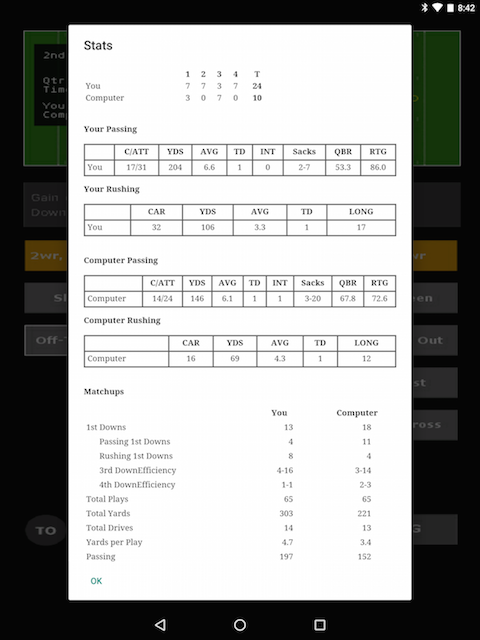 As I mentioned, the game is driven by statistics, and in the future it will use real data sources like these: 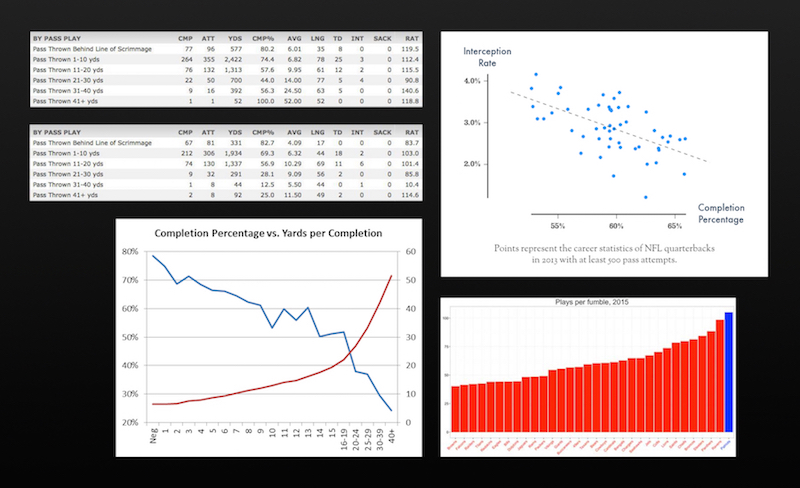 (Those images come from espn.com, grantland.com, and other sites I can’t remember at the moment.)

On the Indiegogo website I mention that Version 2 of the game will use a “Talent Cap.” While it’s not complete, and I don’t know what the exact categories will be yet, this prototype will give you a little idea of how you can assign “Points” to different positions on your team: 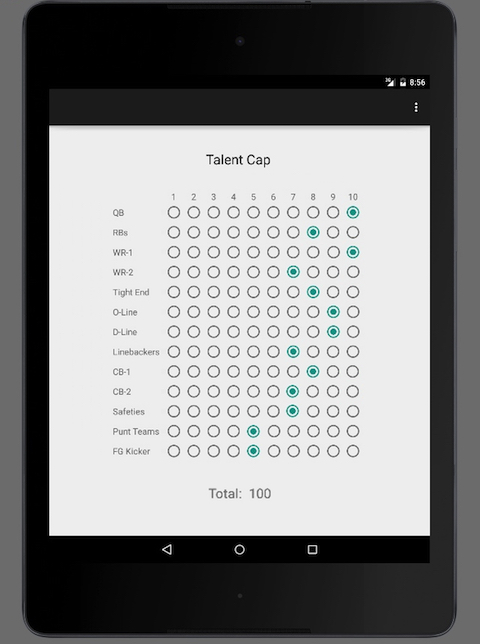 Version 0.2 of the game — the current version — is a long way from my vision of the game. As a result it has many limitations and features/bugs, including:

There’s probably much more to say about the current game, but those are the points that come to mind immediately.

In Version 1 I’ll also add “Help” and other forms of documentation to the game. For instance, one thing that comes to mind is that it would be nice for you to know the accuracy of your field goal kicker by distance. This is built into the game, but it’s something that you currently can’t see.

XO Play is created by Alvin Alexander of Valley Programming.