How much are you worth to your employer?

A long time ago -- 1991 to be exact -- a friend of mine named Joe was a contractor for the aerospace company I worked at. Just like a consultant, Joe was paid by the hour.

At some point Joe decided he was going to leave that company to take a permanent job elsewhere, as he had a medical problem and wanted to get better insurance. Upon telling my employer of his plans, the employer came back and said, “What if we make you a full-time employee here?”

So they proceeded down the road to make Joe a full-time employee, but the process hit a snag. Because of his medical problem, my employer’s insurance wouldn’t pick him up.

At this point something really interesting happened. When Joe went back to talk to our employer about salary, he assumed he was talking about a full-time position, but the employer knew that the insurance company wouldn’t pick Joe up, so they were talking about trying to keep him on as an hourly contractor.

So the employer asked, “Joe, how much would you like?”, to which Joe only replied “80.” (Like Clint Eastwood, Joe was a man of few words.) Fortunately for him he didn’t say what he really meant, which was $80K per year.

Sitting on the other side of the table, the employer thought they were talking about a contracting rate, and they were stunned that he had the balls to ask for $80 per hour (remember, this was 1991), but since he was very good at what he did, they said, “We’ll have to get back to you.” Eventually they did get back to him -- and gave him the $80 per hour they thought he asked for!

I had a similar encounter with one of my exceptional employees. He was an indispensable employee, and one day he came to me in a very non-threatening manner with several facts. He knew (a) how many hours he billed in a year, (b) what we billed for his services ($125/hour, I think), and (c) what he was paid.

He came to me on this day with a spreadsheet, and again, very politely pointed out that he was being paid X, while based on these numbers, he thought he was worth Y, where ‘Y’ was a significantly larger number. We had a short discussion about the numbers, but frankly, I couldn’t argue with him, he was right; he was worth more money to me than what I was paying him. I didn’t give him that new salary immediately, but because he was polite and factual in his approach, I gave him a higher salary soon thereafter.

While I hope those two stories show that if you’re a good employee, you shouldn’t be afraid to ask for what you’re worth, I’d like to share another story.

In this story, another employee of mine thought it was a good idea to negotiate his salary several times a year. His approach was usually something like, “My friend over at Acme Corp is making $X. I think I should be making at least that.” I found his approach threatening, and I also didn’t like that he did this several times a year. I wouldn’t have liked his approach this very much if he was a great employee, but in his case, he was only a very average performer. Replacing him would be simple, but he didn’t see that.

I don’t recall how many salary discussions we had, but I will say that the last one didn’t go very well for him.

How much are you worth?

I think of these first two cases sometimes, and I wonder if good employees don’t realize how much they’re really worth to their employer. I know I paid my top-tier employees very, very well, and I’d like to think other good employers will do the same for their best employees.

A Survival Guide for New Consultants

If you enjoyed this story, there are many more like it in my book, A Survival Guide for New Consultants: 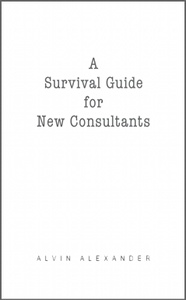