Where to save your custom MacOS AppleScript programs

I was just working on a new AppleScript program on my Mac, when I had to remember where to install my script so I could access it from the MacOS menu bar.

After digging around I saw that I installed all of my original scripts in this Mac folder:

I think I did this so my scripts would appear near the top of the list of available AppleScript programs, as shown in the following figure: 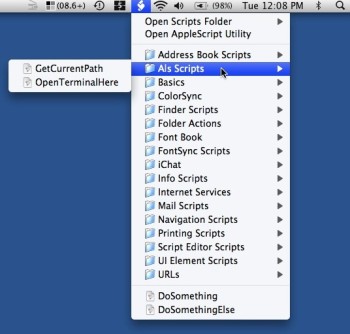 Probably a better place to put these scripts is this folder on your Mac:

That’s a folder you can write to more easily, and it’s probably easier to access on a regular basis. The only drawback seems to be that your scripts go to the bottom of the list of AppleScript's on your system, as shown in the previous figure. That’s where I put the two scripts named DoSomething.scpt and DoSomethingElse.scpt.

As a brief update in July, 2019, I just got back into this again today and noticed that the ~/Library/Scripts folder doesn’t exist by default, but once I created it and put my custom scripts in it, they appeared at the bottom of the AppleScript menu, as shown in that image.