As a little mini-project I wanted to count the number of lines of source code in the Second Edition of the Scala Cookbook as compared to the First Edition. To do this I wrote the following Scala program/script to count the lines between the ---- and .... sections in the AsciiDoc files that represent the old and new versions of the book:

How to run a PHP script from a Unix command line

PHP FAQ: How can I run a PHP script from the Linux/Unix command line?

Solution: To run a PHP script from a Unix command line you can use this syntax:

In two small tests where GraalVM was able to create a native executable, the native executable ran significantly faster than the equivalent Scala/Java code running with the Java 8 JVM, and also reduced RAM consumption by a whopping 98% in a long-running example. On the negative side, GraalVM currently doesn’t seem to work with Swing applications.

If you run into a problem where a Scala shell script won’t run on MacOS — it hangs indefinitely without doing anything — hopefully this bug report will help. The solution is to change this line at the beginning of the Scala shell script:

I just had this problem with Scala 2.12.x and Java 8 running on MacOS 10.14.4, and I can confirm that adding -nocompdaemon solved the problem for me.

Did you know: You can use JavaScript for macOS scripting

I learned today that you can use JavaScript for “scripting” on macOS. These docs say that has been the case since Mac OS X 10.10.

How to use `curl` scripts to test RESTful web services

There may be better ways to do this, but when I was writing a mobile app, with the JavaScript client written in Sencha Touch and the server written with the Play Framework, I wrote some curl scripts to simulate GET, POST, DELETE, and PUT request (method) calls to my Play Framework REST/RESTful web services.

Sadly, I quickly ran into a problem: I couldn’t find a good way to convert AsciiDoc into HTML, or even Markdown. There are tools to convert AsciiDoc to HTML, but for some reason they take the approach of including a ton of markup in the HTML (divs, spans, and attributes), and as far as I can tell there’s no way to turn off that markup.

A Scala “Word of the day” shell script

I have a 19" monitor on the counter between my kitchen and living room, and it’s powered by a Raspberry Pi. I use the Linux Phosphor screen saver to show a scrolling “news and stock ticker” on the display, which I’ve programmed to show news from several different sources (Atom and Rss feeds, along with other news and data sources). An old version of the display looks like this: 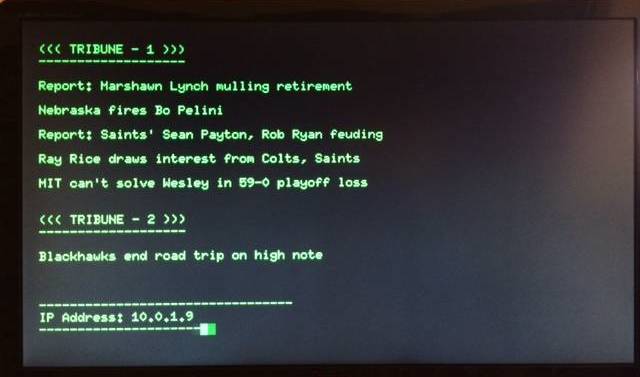 Today I added a new “Word of the day” feature to the display, and as with all of the other code, I wrote a Scala shell script to generate the output.

How to start a Play Framework application running as a service on Ubuntu 16.04

As a relatively brief note, this seems to be the correct way to start a Play Framework application as a service on an Ubuntu 16.04 system.

A shell script to start your Play application

First, you need to create a little Unix shell script that runs the startup command for your Play Framework application. I created a Play application for a website named kbhr.co, so I cd into the directory for that website:

Sure. Assuming that you created a production mode version of your application with the sbt dist command, deployed that zip file to a production server, and have a Play Framework 2.6 application named “myapp,” you can put a command like this in a Unix/Linux shell script to start your Play application: