I dug into this search for clean, minimalist Drupal themes by looking through a variety of Drupal theme collections websites, and trying to pick out the ones that appeared to have a light, clean look and feel. I then uploaded each Drupal theme to the OneMansAlaska website, changed the theme, created an image of each theme, and then moved on to the next one.

I'm not blown away by any of these themes out of the box, but some of them are decent, and I can see how I'd change them for my own needs. I should also note that I didn't try to configure any of these Drupal themes. I just dropped them in, took a look at them, and then moved in. In a few cases the themes might look better with some configuration.

I'm just going to share these themes in alphabetical order here. For the time being I'm also just pulling descriptions of each theme from their Drupal theme page.

Notes on the Drupal Ad The Morning After theme: 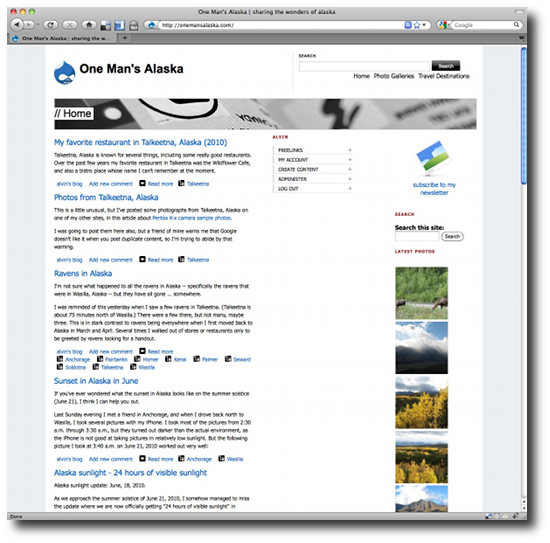 The Drupal Austin theme is a minimalist theme designed for the SXSW 2009 competition. It's a very clean theme, and I used it as the basis for one of my other websites. I don't think it was completed for the Drupal "admin" portion of a website, but I use the default Drupal themes for administrative work, so that's not a big deal for me. Here's some other information on this minimalist Drupal theme: 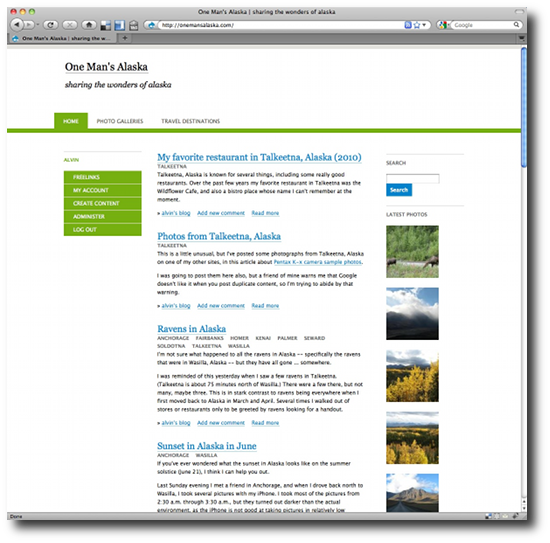 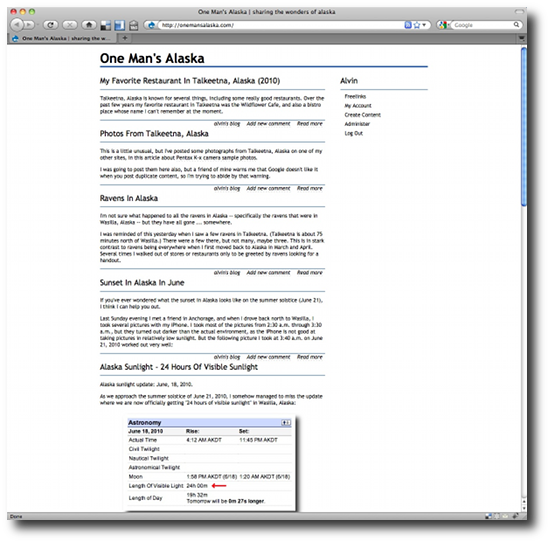 I came close to using the Drupal Burnt theme for another website, but in the end I decided not to. That being said, with a few changes to its fonts and spacing, this can be a very nice minimalist Drupal theme. 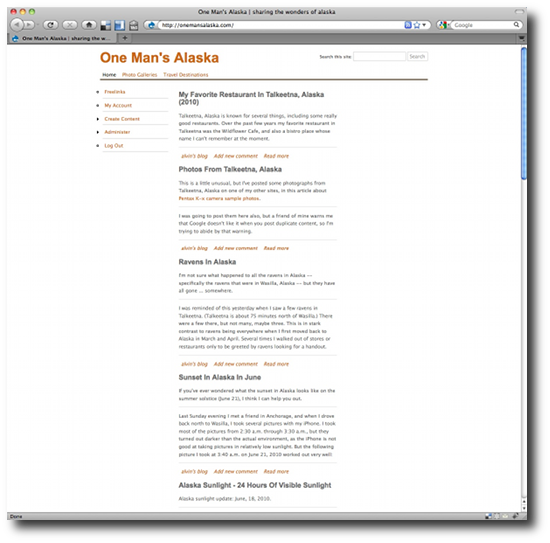 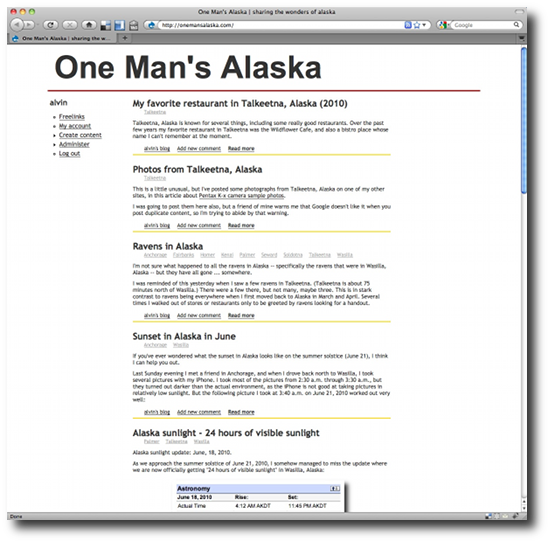 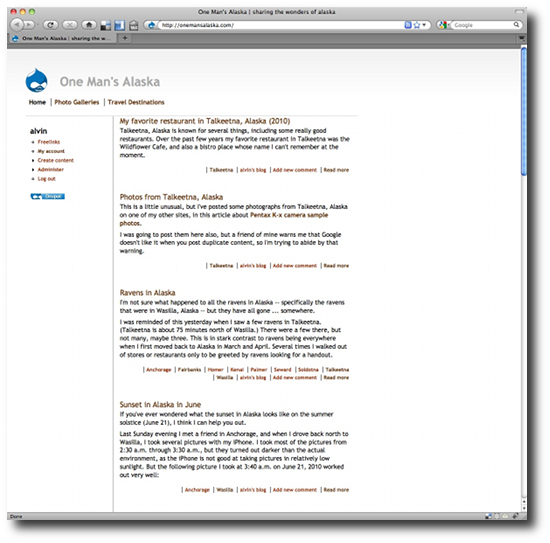 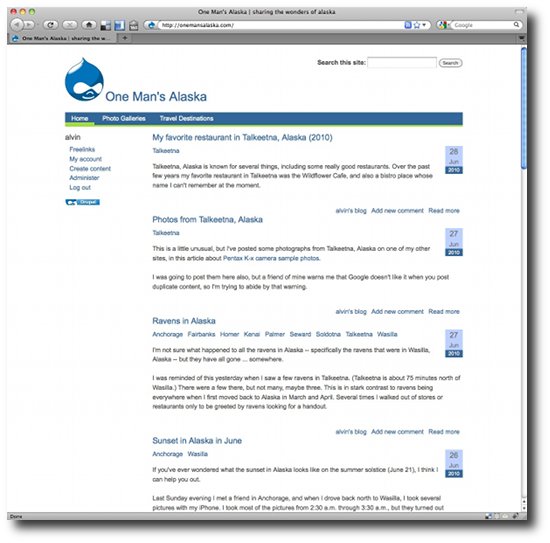 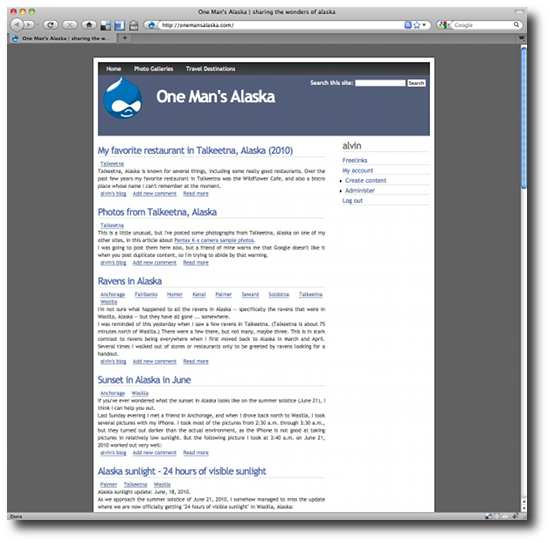 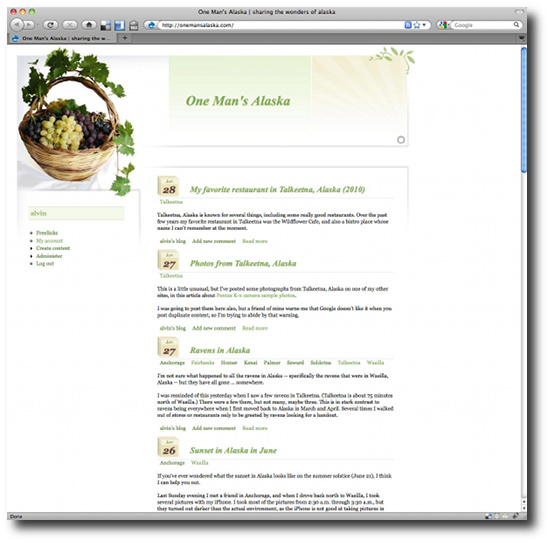 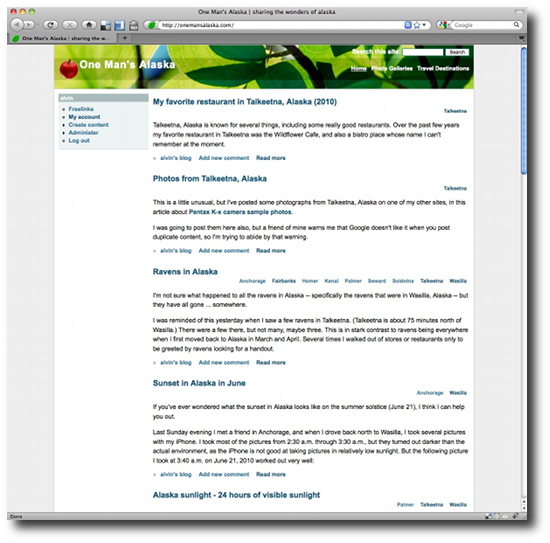 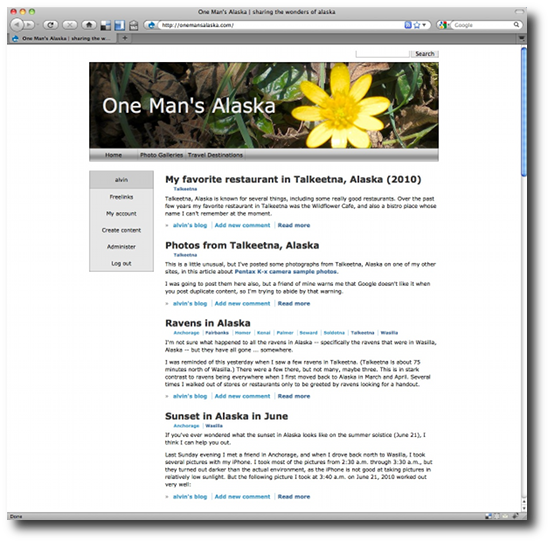 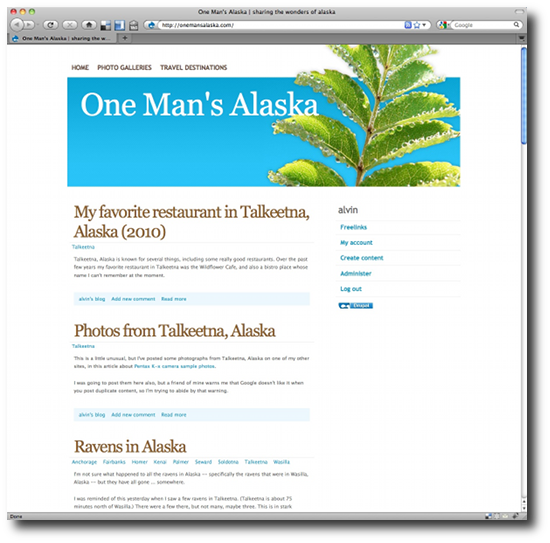 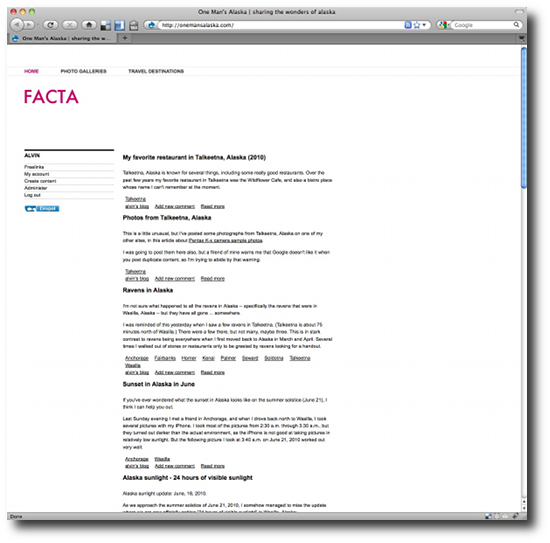 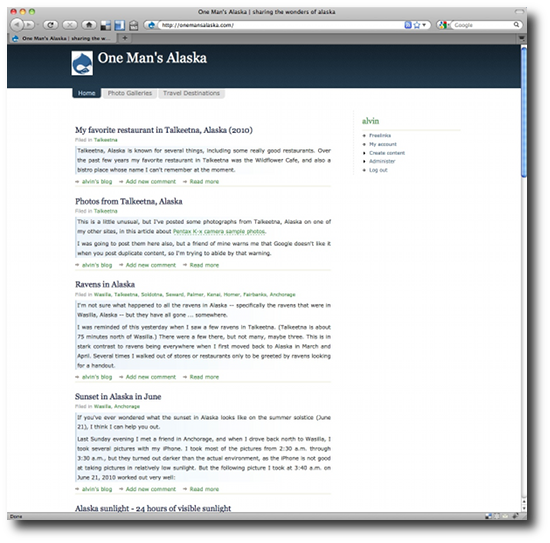 The Drupal Marvin theme is included with Drupal 6. 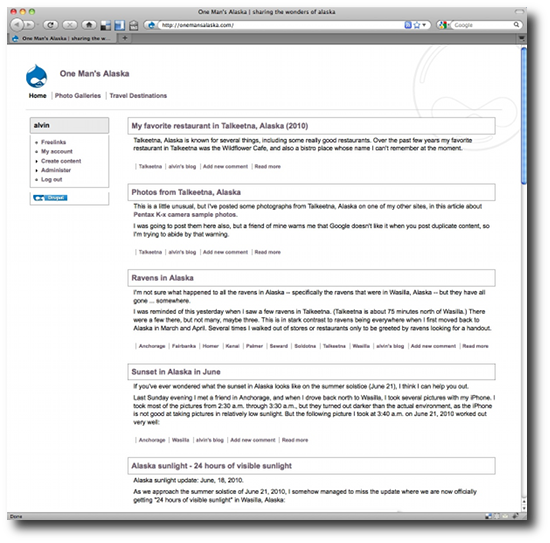 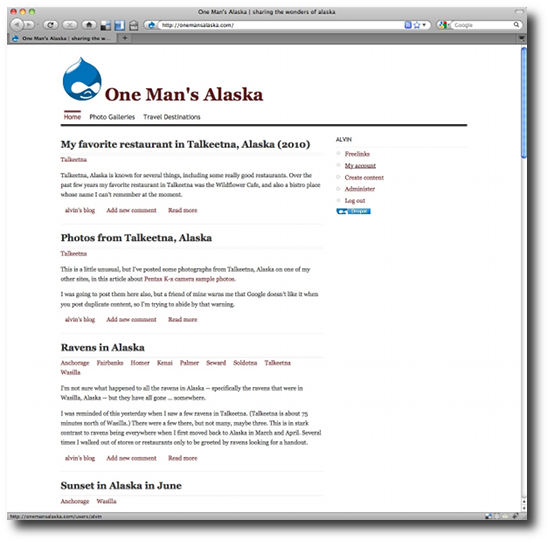 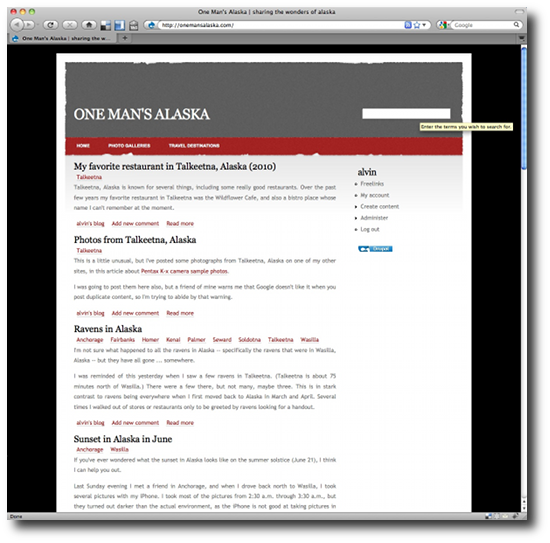 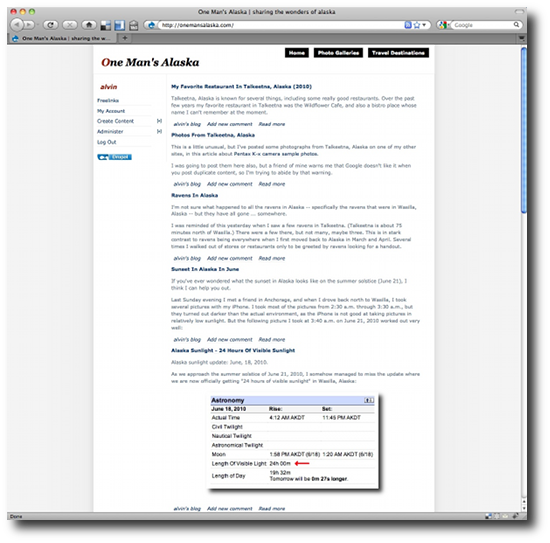 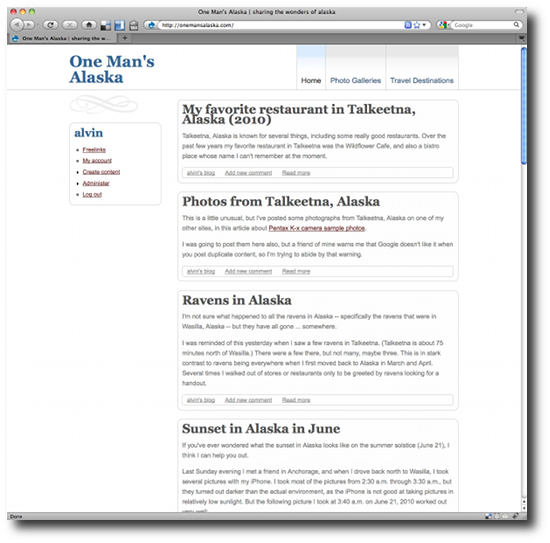 Zen Classic is included with the Drupal 6 distribution. 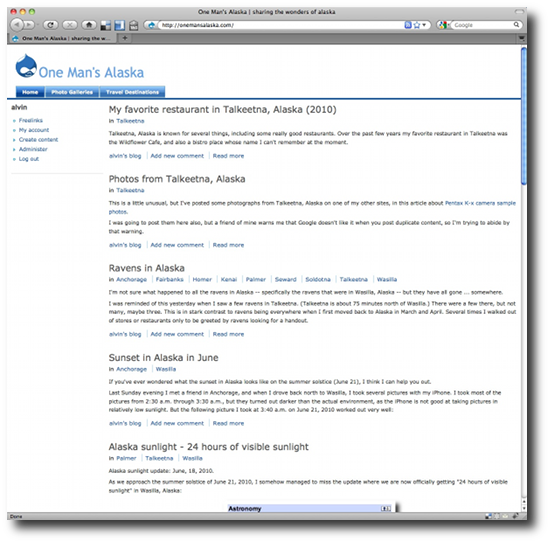 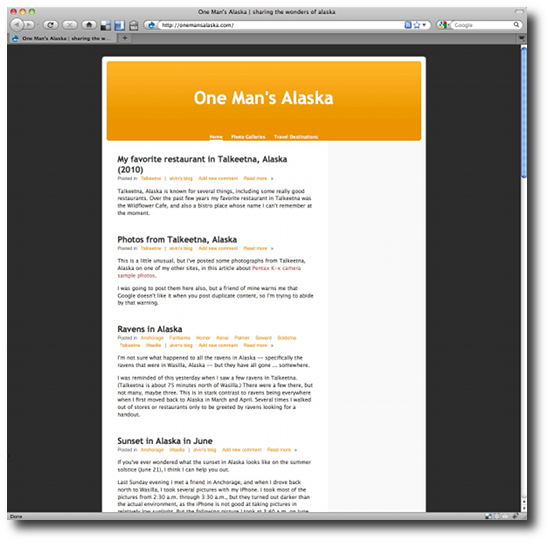 I just finished the first round of the redesign of my website about living in Alaska (One Man's Alaska), and I'm pretty happy with it so far. You may not believe it by looking at it, but I actually started with the Austin theme, then kept working on it until I got something I liked. Here's what it looks like: 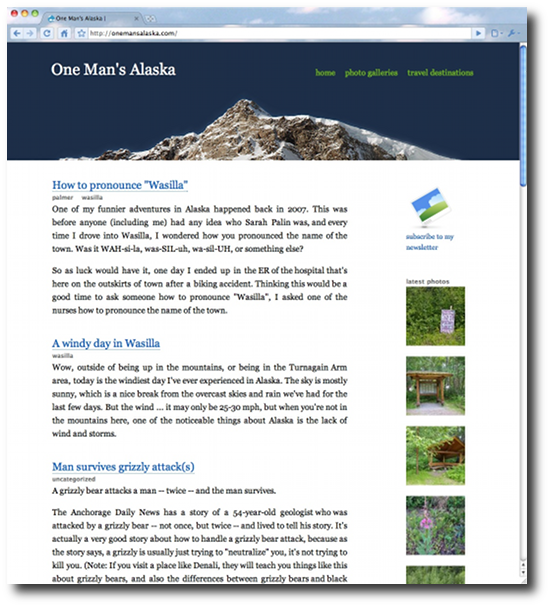