CakePHP and Drupal jobs, 2011 - Way back in December, 2009, I first started looking at the PHP job market, specifically CakePHP, Drupal, and LAMP/PHP job openings. I forgot to run the queries again this past December, but I just took a few moments to update them, so ... here is a quick look at the PHP developer job market in January, 2011.

Digging around again this morning, I once again found the back door into the dice.com website. I've always thought of DICE as a contract programming shop, so I thought I'd start with them. I searched for the following PHP job descriptions, with the following results:

Or, if you prefer charts: 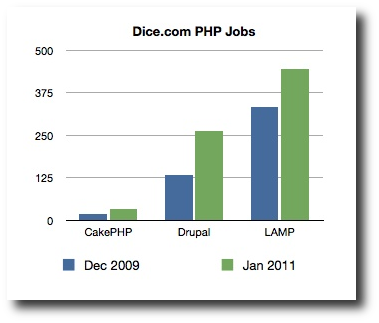 As you can see, the number of CakePHP and Drupal jobs have essentially doubled, while the LAMP/PHP jobs have increased by about 33%. Doing the math, it looks like Drupal accounted for almost all of those new jobs.

Once again, the ration of these numbers is pretty much what I expected. The more general the search, the more results, and CakePHP being the least-commonly used PHP technology. (Not that it's the least-commonly used PHP framework; just the least-known framework I have personally learned lately. I like CakePHP a lot, and I don't want that to come across the wrong way at all.) And Drupal, well, with the release of Drupal 7.0 just a few days ago, it's on a roll.

Keeping with my last PHP job search, I just did the same search at careerbuilder.com, and found the following similar results:

And again the chart view: 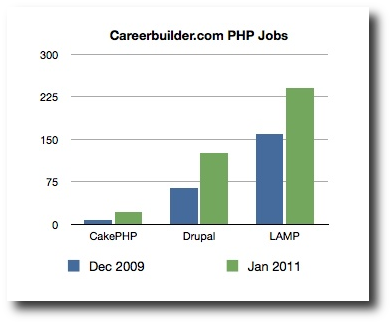 Once again, these numbers and ratios are very consistent with the Dice.com results, although their LAMP/PHP job listings have increased by 50%.

(As I've come back to edit this article, I've seen that Dice.com regularly has more developer jobs listed than careerbuilder, though Dice is more of a contract programming shop.)

Poking around a little more, I just found this link for CakePHP jobs on the CakePHP website. That's a nice service for CakePHP developers, and a great way to promote the CakePHP framework.

While I shared the numbers from my 2009 PHP job search, I thought I'd include a link to that article as well, so here are my December, 2009 CakePHP, Drupal, and PHP job market results.

Other than that, I hope this list of CakePHP, Drupal, and LAMP developer jobs (and links to job boards) has been helpful.