macOS: How to put keyboard focus on the Mac menubar

For a long time I've read that you could use your Apple/Mac keyboard to access the menubar on MacOS systems using the [Control][F2] keystroke. That never actually worked, so I logically assumed that everyone else was insane.

Well, it turns out that what really happened is that silly me was using Apple keyboards ... and as I was trying to figure this out again today, I looked over at that [fn] key on the keyboard, and thought, "No, surely I wouldn't have to press that too ..."

Getting back to the insanity ... I've read that you can also type the [Control][M] keystroke to access the Mac menubar, but that isn't working — with or without the [fn] key, the [Shift] key, or even the gas pedal. If anyone knows the secret to that keyboard command, please write me, or better yet, leave a comment below. [Control][M] is certainly an easier keystroke to remember ... if only it worked.

With many thanks to the people who commented below, I thought I'd share two screenshots of the Mac OS X keyboard preferences panels that show what is discussed in the Comments section. First, the Keyboard preferencs panel (tab) shows the option to use your Mac function keys as "standard" function keys. 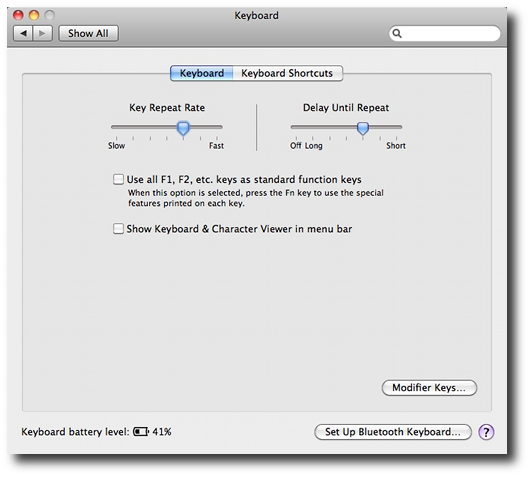 Next, the Mac Keyboard Shortcuts Preferences panel shows a number of things, including the part where [Control][M] is not offered as a keyboard shortcut to get to the Mac menubar from the keyboard: 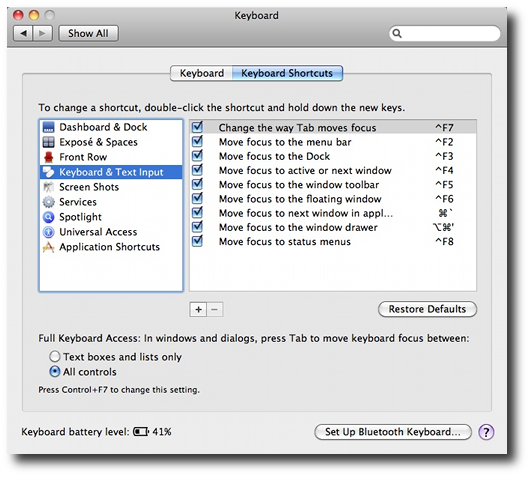 With the "+" and "-" buttons shown below the keystrokes area, it looks like you may be able to define your own keystrokes, but I just tried this, and didn't have any luck in making [Control][M] work with the menu bar ... I have a little too much on my plate today, but I'll try to look at this more the next time I have a little free time.