How I started a multimillion dollar consulting firm

A friend of mine is currently unemployed, and as I've talked to her about ways to approach her situation, I'm reminded of how I started a consulting business named Mission Data.

In the beginning, Mission Data was just me, Alvin Alexander, working out of the basement of my house. My wife became Employee #2, and she took care of the business and financial matters for me. After working like this for a while, I became interested in expanding the company, and in a chance meeting, I ran into a friend and former co-worker, who was the best salesperson I ever knew. We ran into each other at a bookstore one night, and agreed to meet for lunch a few days later.

He wasn't happy with his current job, and I wanted to grow the company, so without knowing exactly what we did, or how to properly organize a company, he came on board. Our original slogan was "Data - Voice - Fax - [Something Else]" (I can't remember the last term), mostly because we had no idea what we did, and we were trying to keep every possible option open. The basic theory was that if you throw a bunch of crap on a wall, something will stick.

The business was still run out of my basement, and my new business partner came over every day. We talked about different options, and who we knew. He began calling our old friends and co-workers, while I set up some additional infrastructure things, like a computer network and phone system.

We finally got a break when he called a company I had worked with about five years earlier, where a friend of his was now working. The project I worked on with that company was successful in that we delivered a software application that did what we said it would do: It reduced the runtime of batch reports for advertising agencies from three days to less than three hours, while increasing the data set size by 300%.

Other than that, the project was a disaster: It was way over budget, and a little late. It was my first large project, I had no idea what I was doing, didn't know anything about Use Cases or software requirements, and was a relatively new C programmer. I gave my "methodology" the acronym "SLOP," which stood for Sheer Luck, Overtime, and Pain.

So, when this company agreed to take our phone call, and further agreed to an initial meeting, I was surprised.

I went into the meeting expecting to meet with the people I had worked with previously, but to my further surprise, the company had gone through drastic changes, and we met with a person I didn't know, a man named Bill, who had recently been brought in as a VP to run the software group.

Bill was courteous enough, but the meeting just wasn't going well, and he was trying to show us the door. Finally, before we were kicked out, I blurted out, "How about this? I'll work for you for three days, free of charge. If you like my work, you can hire me if you'd like. If you don't like it, no hard feelings, you'll just have wasted a few resources on your part."

Bill thought about this for a few moments, and then for some reason he agreed to give me a chance.

Fortunately it all went very well. The programmers I worked with were As/400 RPG developers who didn't know much about Java, but were eager to learn. I made a lot of progress, and to my surprise, on the second afternoon Bill gave us the account. Very shortly after this we hired a talented programmer we had been talking to, and the account served as a "pillar account," earning us over a million dollars in the coming years.

That's the abridged story of how Mission Data, a consulting firm that would eventually grow to fifteen employees (and a few part-time contractors) was born. (I sold my interest in Mission Data in 2007, and used the sale of that business as the inspiration for my first book, How I Sold My Business: A Personal Diary.)

So, if you're a hard worker, but currently out of a job, or just interested in starting your own consulting company, I can tell you from my own experience, it can be done. As you can see, we didn’t know anything magical, we just worked hard, and we didn’t let what we didn’t know stop us from doing what we wanted to do.

This short story on "How I started a multimillion dollar consulting firm" is a free chapter from my new book, "You want me to do what? A Survival Guide for New Consultants." My book is now available for the Kindle on Amazon.com for only $2.99, and you can preview it by clicking on the image below: 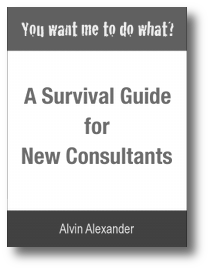