I've mentioned before that I don't use Firefox on Mac OS X any more because of performance issues. What I forgot is that the combination of Mac OS X, Firefox, and Yahoo Mail also seems to have something of a memory leak. Evidence of this is shown in the figure below: 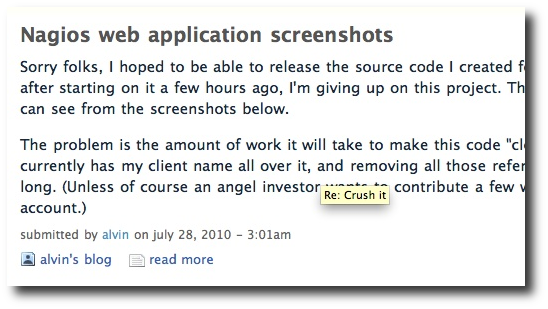 In this image, the the white background and text comes from the Chrome browser running in my first "Space" on my Mac OS X 10.6.x system. The yellow label with the text "Re: Crush it" comes from Firefox, which is running Yahoo Mail in an entirely different Mac OS X Space. This label follows me around from space to space, and if I click it, it takes me back to Firefox, in whatever space Firefox is running in. (If I don't click it, it just follows me around, kinda like the old "xeyes" program, but much more annoying.)

At first I wondered if this might be happening due to a faulty Firefox plugin, but I turned off all the plugins I use, and this Mac Firefox memory leak still happens.

So, now that I'm reminded of why I switched from Firefox to Chrome, I'll be switching back once again.