My gallstones diet advice: how to live with gallstones

My gallstones diet advice: Ugh, my health has destroyed my productivity lately. Due to a mysterious stomach ailment, I’ve had a lot of “stomach” pain, visited the ER several times, met a lot of doctors, had many tests, and lost thirty pounds in less than seven weeks.

At this time we don’t know if it’s the main cause of the problem yet, but one thing going on for sure is that I have gallstones. Gallstones are quite literally stones that form in the gallbladder. As I’ve learned, the gallbladder is a little organ that sits below the liver (see the images below), and stores bile that is produced by the liver. When your body chemistry is out of whack (or perhaps because of hereditary factors), gallstones form, and the gallstones can then cause a lot of pain (though you can also have gallstones and never know it).

After all this, I now realize the actual “stomach” is just one small part of our overall digestive system, and these days my primary focus is on the gallbladder and gallstones, specifically improving my diet to reduce my gallbladder pain.

Note: I originally wrote this article in the summer of 2010. I survived on this gallbladder/gallstones diet for six months, lost a lot of weight because I couldn’t eat, but ultimately decided to give up my gallbladder to a surgeon. These days I’m glad to say that I’m doing great!

Looking at this from a positive standpoint, it turns out that gallstones pain makes for a wonderful biofeedback mechanism. Eat too much, and the gallstones give you pain. Or eat a little, but too much of the wrong food, and the gallstones give you pain. Living with gallstones is like having a natural Lap-Band procedure, and I’ve found that by eating a “gallstone diet” I've been able to avoid pain and continue losing weight, which in my case is a good thing. As I update this article, now 12 weeks after my initial problems, I’ve lost 38 pounds and my cholesterol level is down to an amazing 140 — that's how healthy a good gallstones diet can be for you(!).

For the last eight weeks I've been paying real attention to what I eat, and the resulting gallbladder pain, or non-pain. Based on keeping a log of what I eat, I thought I'd share my gallstones diet advice here, in case it will help anyone else currently suffering from gallstones pain.

Rule number one of my gallstones diet advice is to drink a lot of water. Whenever I have any gallbladder pain, I immediately start drinking water, and the pain subsides in roughly an hour. Or, if I just drink a lot of water from the morning on, the pain never gets too bad.

That being said, I don't happen to like water, so I usually add a wee bit of lemon juice and Equal to it, and it has a decent flavor. From time to time I'll also drink Gatorade or their G2 product.

Juice is also good. A product named Juicy Juice is actually made from real juice, so I've been focusing on it. I've read that grape juice is supposed to be very good for gallstones and gallbladder pain, and I've had no problems drinking it.

To summarize, okay drinks so far are: 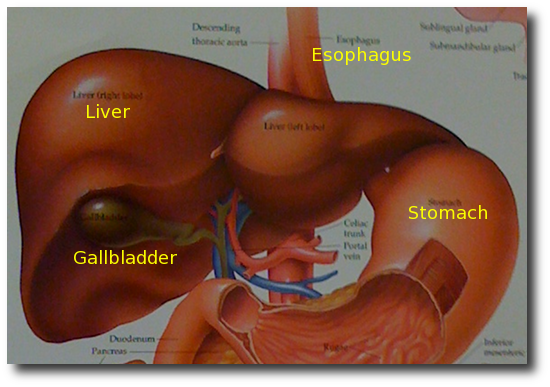 (An image showing the liver, gallbladder, and related organs.)

Next, here's a list of foods that I have been able to eat in my gallstones diet without any gallbladder pain:

Oreo cookies Even though they have a lot of fat, I have been able to eat some Oreos, though I never have more than one at a time.

Coffee Plain coffee seems to be okay, though I don't drink more than 1-2 cups all day. (Three weeks ago I couldn't even think about drinking coffee, so be careful here.) Also, I only add skim milk to it any more; the days of cream, whole milk, or even 2% milk seem to be gone.

Avocados I've read many pages of gallstone diet advice, and avocado advice varies. Personally, I've had five avocados now in the form of a simple guacamole recipe I make (avocado, salt, lemon juice), and I've had no problems with them, typically consuming nearly a full avocado in one sitting with some saltines.

Fiber I've been told to load up on the fiber. I already had to do this because of scar tissue pain in the area where my appendix used to be, but the doctor tells me to add even more. (As fiber supplements go, Metamucil is the best fiber product I've used, Citrucel the second best. I've found that other products cause, er, tons of bloating, "intestinal distress", and other socially unacceptable behavior, lol.) 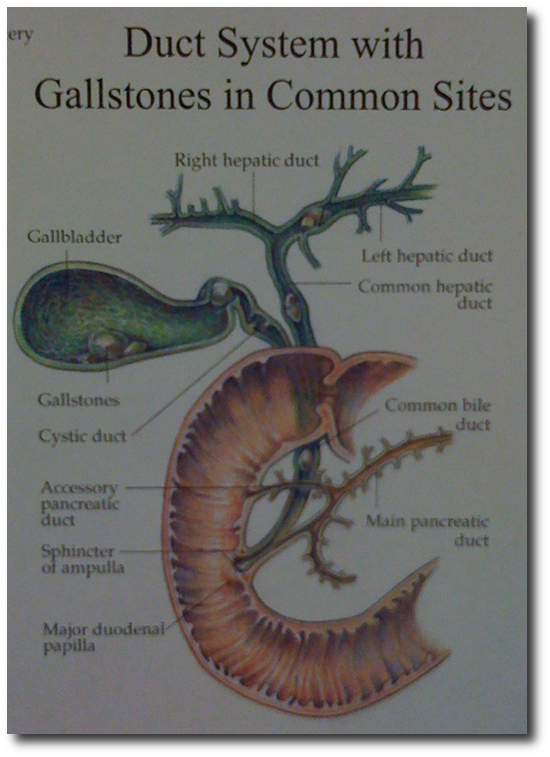 (Gallstones in the gallbladder and duct system.)

Chocolate I love chocolate, but it's now one of the worst foods for me. Chocolate used to be my favorite food group in the food pyramid, but recently I've tried chocolate chip cookies and Starbucks caffe mocha, and both of those cause gallstones pain. I can slip in very small quantities with a lot of water, but at some point you ask yourself if it's really worth it.

Milk I originally wrote that "Milk in all forms seems to cause problems", but as an update, I have been alternating skim milk and 2% milk in my gallstones diet, and while I still don't drink much, it has been okay. (The short story here is that I wasn't getting enough fat in my "gallstones diet", and was constantly light-headed. My doctor told me to try a little more milk, and it has worked out okay.)

Gallstones diet - Foods I don't know about yet

Here are some food products I like but haven't tested much yet, so the jury is still out on them.

Cheese I've had only two meals lately with small amounts of cheese, but given the problems I've had with milk, I assume this will be a problem. People who have had their gallbladder removed tell me that foods like pizza and ice cream can't be eaten too often without side effects.

Ice cream I have had a little bit of ice cream at night the last week, and while it hasn't caused any immediate problems, I have had gallstones pain when I wake up in the morning. Again, I drink a lot of water immediately, and the pain goes away.

Soda I used to be identified by always having a can of soda in my hand, but I've had very little soda in the last three months. I do mix some diet Sprite in with my water from time to time to get a different flavor, but the ratio is probably at least five parts water to one part Sprite. I have no idea how a full can of soda would do, and with the pain of intestinal distress still in my memory, I won't be going there any time soon.

Fatty meat Again, I don't eat much meat, so not eating it isn't a real problem for me, except for Gyros. I have had some small amounts of chicken, and haven't had any problems from it. I'll be trying some Gyros next week, and you can be sure I'll have a big bottle of water (and fiber) with me.

Tomato juice Because I don't like vegetables I used to drink a glass of low-sodium V8 juice every day to make sure I was getting some sort of vegetable intake every day. I haven't gotten back to this practice yet.

Spicy foods I love spicy foods. I could put hot sauce or jalapenos on just about anything. When I lived in Texas there was a place that made a "deathburger" — a hamburger with hot sauce, hot pepper cheese, and jalapenos, and I could eat those every day. Next to a daily cup of coffee, I miss spicy foods the most. I put some hot sauce on some rice yesterday and I seemed to get away with it, so I'll be trying that again soon. :)

It's now mid-August, 2010, and I've learned a few more things. First, because I lost so much weight so fast on a nearly fat-free diet, I started getting very light-headed and dizzy. In short, the doctors recommended that I try to get more fat in my diet, so I have added in more "good fats" by adding in Smart Balance butter, olive oil, 2% milk, and even a little low-fat ice cream. Again, you still shouldn't have much overall fat in your gallstones diet, but a ratio of 10-15% fat seems to be working just fine.

When I added some milk and ice cream back in my diet I also took a look at the bottle of Hershey's Chocolate that has been sitting still in my refrigerator for nearly four months now. Sure enough, it doesn't have any fat in it, so I've been adding a little bit of that to my ice cream to help satisfy my chocolate cravings.

I'll keep updating my "gallstones diet advice" here as time goes on. While the doctors try to determine if something else is happening, there are no immediate plans to remove by gallbladder, so living with gallstones is the current plan.